Market Square is a pedestrian mall located in Knoxville, Tennessee, USA. Established in 1854 as a market place for regional farmers, the square has developed over the decades into a multipurpose venue that accommodates events ranging from concerts to political rallies, and has long provided a popular gathering place for artists, street musicians, war veterans, and activists. Along with the Market House, Market Square was home to Knoxville's City Hall from 1868 to 1924. Market Square was listed on the National Register of Historic Places in 1984.[2]

Land for the market place was given to the city by William G. Swan and Joseph A. Mabry.[3] Farmers from the surrounding area would bring their wagons to the Market House, where they sold their produce and wares.[4] During the Civil War, the Union Army used the Market House as a barracks and magazine.[5]:23-25 Knoxville's post-Civil War population boom brought about continued development in Market Square, most notably the construction of Peter Kern's confections store (now the Mall Building) in 1875 and Max Arnstein's seven-story department store in 1906. After the Market House burned in 1960, Market Square was converted into a pedestrian mall.[2]

A local newspaper once dubbed Market Square, "the most democratic place on earth," where "the rich and the poor, the white and the black, jostle each other in perfect equality."[6] The Square has been mentioned in the works of James Agee, Cormac McCarthy, David Madden, and Richard Yancey,[5]:113-122 and has hosted performers ranging from Duke Ellington to Steve Winwood.[5]:52-60 Politicians and activists who have delivered speeches at the Square include Frances Willard, Booker T. Washington, William Jennings Bryan, Edward Ward Carmack, and Ronald Reagan.[5]:97-102, 174

Market Square is located at the center of Knoxville's downtown business district. It consists of an open area covering just over 1-acre (4,000 m2), with storefronts on the east and west sides. The Square is bounded by Union Avenue on the south and Wall Avenue on the north. Two narrow alleys divide the backs of the Square's stores from the backs of buildings lining Gay Street to the east and Walnut Avenue to the west. Krutch Park lies opposite Union Avenue to the southeast, and the TVA Towers overlook the Square to the north.[2]

Market Square, as it appeared on an 1871 map of Knoxville; the Square is occupied by the Market House and City Hall

Knoxville's first market house, built in 1816, was located on Main Street, but was torn down in 1823. Over the next thirty years, farmers simply sold produce out of their wagons, usually parked along Prince (now Market Street) or Gay. In 1853, William G. Swan and Joseph A. Mabry, who had been speculating in land around Knoxville, purchased an 11-acre (4.5 ha) tract of pastureland from physician John Fouche that lay north of Union Avenue. Hoping to boost the land's value, they donated a small part of this tract— the present Market Square— to the city for the construction of a market house. The deed stipulated that the land must be used for this purpose, or ownership would revert to Swan and Mabry, or their heirs.[5]:4-11

The original Market House was designed by the architectural firm Newman & Maxwell, and opened in January 1854. As many farmers preferred to sell produce from their wagons rather than pay the three dollars per month stall rental fee, the Market House saw scant use in its early years, even after Knoxville banned curb-side selling. A few shops sprang up on the Square, however, among them Albert Hudiburg's grocery, Patrick Tracey's saloon, a lumberyard run by John Jones, and Peter Knott's "bowling saloon."[5]:16-22

By 1861, Market Square had become significant enough to be a designated polling station for the Ordinance of Secession vote that took place on June 8 of that year. In late 1863, when the Union Army occupied Knoxville, the Market House was converted into a barracks and ammunition magazine. Much of the stall furniture was tossed outside and ruined by the elements, and the Square's shopkeepers continuously voiced their fears about the large amounts of volatile gunpowder being stored in the Market House. For decades after the war, Confederate and Union veterans societies met regularly in buildings on Market Square.[5]:23-24, 35

Market Square, as it appeared on an 1886 map

In 1868, Knoxville built its first permanent City Hall— a two-story building with a belltower— at the north end of Market Square. The following year, the Market House was expanded northward by about 90 feet (27 m), leaving just a short gap between it and City Hall that acted as a weighing station. During the same period, German immigrant and Confederate veteran Peter Kern opened his "ice cream saloon" at the southwest corner of the Square. Kern completed what is now known as the Mall Building in 1875, with the first floor serving as a confections retail, the second story as an elegant ice cream shop, and the third floor providing a meeting place for the Odd Fellows.:28-32, 47 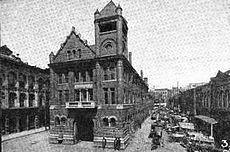 By 1876, businesses on Market Square included a millinery, a physician, a pharmacist, a dress maker, a jeweler, and a boarding house. Within a few years, Fenton's Monumental Marble Works was operating out of a shop on the Square, carving sculptures such as those found at Old Gray Cemetery.[5]:52, 73 Saloons, such as Michael Cullinan's, the Jersey Lily, and Houser & Mournan's, maintained a continued presence, although the Women's Christian Temperance Union was active on the Square by the 1880s.[5]:82, 100 The Knoxville Chronicle (later the Knoxville Journal) relocated its office to Market Square in the 1870s, and it was here that publisher Adolph Ochs began his career in the newspaper industry.[5]:39-41

Sausage maker Adolph Ziegler and his partners Ignaz Fanz and Anton Metler began selling sausages out of the Ziegler Building in the 1880s, and two companies— Baum's and H. T. Hackney— began as storefronts on Market Square during the same decade. In 1897, the city built a larger Market House that included a second-story auditorium, and was adjoined to the City Hall building. Market Square reached its height in 1906 when Max Arnstein built his seven-story department store overlooking the Square's southwest corner.[5]:84, 104 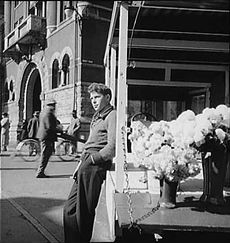 Vendor on Market Square, circa 1941, with the Market House in the background

In 1907, a citywide ordinance banning alcohol was passed, and Market Square's saloons were forced to close. With the arrival of streetcar suburbs to the north, west, south, and east of the downtown area, residents began to move away. In 1925, Kern's business was sold to investors who reorganized the company with a focus on bread making, and the Kern Building on Market Square became Coleman's drugstore. That same year, Knoxville moved its City Hall to the abandoned Deaf and Dumb Asylum a few blocks away. In 1927, Max Arnstein retired, and his department store closed.[5]:126-129

In spite of these setbacks, new businesses continued moving to the Square. A local grocery store chain, the White Stores, opened a store on the Square in 1927, and regional grocer Cas Walker opened one of his cash stores on the Square in the early 1940s. Movie theaters also began appearing on the Square, most notably the Rialto in the late 1920s and the Crystal in the 1930s. During the same period, Greek immigrant John Demetrius Cavalaris opened the Golden Sun, beginning a multi-generational presence on the Square.[5]:134-141

In the 1950s, Knoxville mayor George Dempster spearheaded an effort to tear down Market Hall as part of the city's efforts to revitalize its downtown area.[7] In spite of a campaign by preservationists to save the building, which included speeches by poet Carl Sandburg and conservationist Harvey Broome, the city voted to remove Market Hall in November 1959 (the building's fate was further sealed when it partially burned a month later). Market Hall was replaced by the Market Square Mall, an open-air market that consisted of a series of white "toadstool"-shaped canopies.[5]:149-153 The mall received a boost with the completion of the TVA Towers at the north end of the Square in 1976,[8] and the construction of Krutch Park in 1981. In 1986, at the urging of historical preservationists, the white canopies were removed, and the Market Square Mall was renamed "Market Square."[2][5]:174-178

Musicians have been a staple of Market Square since at least the late 1860s, when Peter Kern employed brass bands for various festivities. In the 1880s, "Dr. Lighthall's Mexican Band" first appeared on the Square, and Tennessee politician and fiddler Robert Love Taylor began performing with the "Market Hall Fiddlers."[5]:52-60 Promoter Frank Murphy held fiddle contests in Market Hall in the 1920s which drew the likes of Charlie Bowman, Earl Johnson, and the Tennessee Ramblers,[9] and during same decade the St. James Hotel (at the northeast end of the Square) hosted the studios of WNOX.[10] By the 1980s, diverse styles such as bluegrass, jazz, folk, and punk were being played in Market Square's clubs.[5]:54 The Sundown in the City concert series, established by AC Entertainment in 1998, regularly draws crowds of 10,000 or more.

Market Square has been mentioned in the works of numerous authors throughout the 20th and 21st centuries. James Agee gives a lengthy description of Market Square in his autobiography, A Death in the Family (1957), and Cormac McCarthy describes the Square in The Orchard Keeper (1965) and Suttree (1979). Market Square is also mentioned in Anne Armstrong's The Seas of God (1915), Joseph Wood Krutch's More Lives Than One (1962), David Madden's Bijou (1974), and more recently, in Richard Marius's An Affair of Honor (2001) and Richard Yancey's The Highly Effective Detective (2006).[5]:113-120

Political groups have been active at Market Square since at least 1876, when politician William F. Yardley spoke before a gathering of Radical Republicans. Temperance activists were among the most vocal in the early 1900s, when temperance leaders such as William Jennings Bryan, Edward Ward Carmack, and Frances Willard gave speeches at Market Hall. Women's suffragist Lizzie Crozier French was active on Market Square as early as the 1880s, and today is depicted in the Square's Women's Suffrage Memorial. Socialist politician Harry McKee spoke at the Square in 1904, and Booker T. Washington delivered a speech on civil rights at the Square in 1909.[5]:44, 97-102 In 1980, Republican presidential candidate Ronald Reagan spoke before an audience of 6,000 at Market Square. Democratic candidate Walter Mondale spoke at the Square in 1984, but managed to draw just a few hundred.[5]:174-175

Market Square is currently used year-round as a venue for special outdoor events, including a seasonal farmer's market, the "Sundown in the City" concert series, and community band concerts.[11] The bell from the old market house is displayed at the Union Avenue end of Market Square. Nearby is the Women's Suffrage Memorial, a statue created by sculptor Alan LeQuire to commemorate Tennessee's role in achieving Women's suffrage in the United States.[4] An open-air ice skating rink is created in the square every winter.[12]

The square was listed in the National Register of Historic Places as the Market Square Commercial Historic District on December 20, 1984. Buildings surrounding the square illustrate 19th- and 20th-century commercial architecture. Most once housed commercial uses on the ground level and residences in upper floors.[3] The historic district includes twenty contributing buildings, seventeen of which are located on the Square, and three of which are located along Union or Wall avenues. Several historic buildings were listed as "non-contributing" in the 1984 listing due to mid-20th century modifications, but have since been restored.

Buildings of interest in the district include: 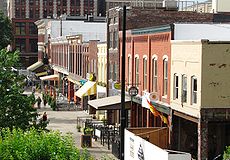 Row of storefronts along the west side of Market Square; the Golden Sun once occupied the yellow building on the far right