Meet the Press[5][6] is a weekly American television news/interview program produced by NBC. It is the longest-running television series in American broadcasting history, despite bearing little resemblance to the original format of the program seen in its television debut on November 6, 1947.[7] It has been hosted by 11 moderators, first by Martha Rountree. The current host is David Gregory, who assumed the role in December 2008. The show got a new set on May 2, 2010, with video screens with a library type setting with book shelves and a different modified intro music with David Gregory previewing the guests using the large video screen and with the Meet the Press theme music in a shorter "modernized music with the beginning repeated with drum beats" (See "High-definition broadcasting" further down this page for additional information). [8]

Meet the Press and similar shows specialize in interviewing national leaders on issues of politics, economics, foreign policy and other public affairs. These shows help fulfill the obligations of the networks to provide a public service to the community.

Meet the Press is the highest-rated of the American television Sunday morning talk shows.[9]

The program's usual time slot over the NBC network is airing from 9-10 a.m. local time in most markets, though this may vary by markets due to commitments by affiliates to religious, E/I or local public affairs programing, and varies several weeks in the summer due to morning coverage of Grand Slam tennis and golf tournaments by NBC Sports. The program also re-airs on MSNBC Sunday afternoons at 2pm ET and early Monday mornings 4am ET (also over the Sirius/XM Satellite Radio simulcast of MSNBC audio), along with an early Monday morning replay as part of NBC's "All Night" lineup. The program is also distributed to radio stations via syndication by Westwood One, and aired as part of C-SPAN Radio's replay of the Sunday morning talk shows.

The show's format consists of an extended one-on-one interview with the host and is sometimes followed by a roundtable discussion or one-on-two interview with figures in adversarial positions, either Congress members from opposite sides of the aisle or political commentators. The show expanded to 60 minutes starting with the September 20, 1992 broadcast.[10]

Occasionally, a final segment called "The Meet the Press Minute" was added. It was devoted to topical clips from the show's extensive archives.

Meet the Press originates on NBC in the United States, with additional telecasts on various other NBC Universal channels, including MSNBC in the U.S. and Canada, CNBC Europe in Europe, and CNBC Asia in Asia. It is also broadcast in Australia on the Seven Network.

Meet the Press is also available as an audio or video podcast,[11] and is simulcast on radio stations by Westwood One.[12]

The following is the list of moderators for Meet the Press:[1] 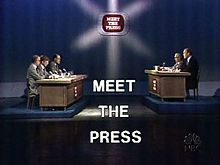 Meet the Press began on radio in 1945 as American Mercury Presents: Meet the Press,[13] a program to promote The American Mercury, a magazine that Lawrence E. Spivak had purchased in 1939. Before the program aired, Spivak asked the journalist Martha Rountree, who had worked in radio and had worked for Spivak as a roving editor for the magazine, to critique the plans for the new radio show. Based on her advice, Rountree created a new radio program that she called The American Mercury, on October 5, 1945.[2]

On November 6, 1947, while still on the Mutual Broadcasting System, the show was subsequently reincarnated on the NBC Television Network and the title shortened to Meet the Press. The radio version also adopted the new name. Although some sources credit Spivak with the program's creation,[1][7] Rountree developed the idea on her own, and Spivak joined as co-producer and business partner in the enterprise after the show had already debuted.[2]

Meet the Press was originally presented as a 30-minute press conference with a single guest and a panel of questioners. Its first guest was James Farley, who served as Postmaster General, Democratic National Committee Chairman, and campaign manager to Franklin D. Roosevelt under the first two terms of the New Deal Administration. Its first hostess was its creator Martha Rountree, to date the program's only female moderator. She stepped down November 1, 1953, and was replaced by Ned Brooks, who remained as moderator until December 26, 1965. Spivak became the moderator on January 1, 1966, moving from his role as a permanent panelist. Mr. Spivak retired on November 9, 1975, and he was replaced by Bill Monroe, who stepped down on June 2, 1984.

The program then went through a series of hosts as it struggled in the ratings against ABC's This Week with David Brinkley. Roger Mudd and Marvin Kalb (as co-moderators) followed Monroe for a year, followed by Chris Wallace in 1987 and 1988, and Garrick Utley from 1989 through December 1, 1991.

Network officials, concerned for the show's future, turned to Tim Russert, the network's Washington bureau chief. He took over on December 8, 1991, and remained until his death on June 13, 2008, serving as moderator longer than anyone in the program's history.[14]

Under Russert, the show was expanded to one hour and became less of a televised press conference and more focused on Russert's questions and comments, with longer interviews and with Russert hosting panels of experts.

Russert signed off by saying, "That's all for today. We'll be back next week. If it's Sunday, it's Meet the Press."

During the football season, Russert, a native of Buffalo, New York and an avid Buffalo Bills fan,[15][16] sometimes added, "Go Bills!", and occasionally would ask panelists, "How 'bout those Sabres?" if the Buffalo NHL hockey team was doing well. Spoofs of the show on Saturday Night Live often reflect this addition.

Russert died on June 13, 2008 of a sudden coronary thrombosis (caused by a cholesterol plaque rupture). The former NBC Nightly News anchor and current special correspondent Tom Brokaw hosted a special edition of Meet the Press dedicated to the life of Russert on June 15, 2008, in which Tim Russert's chair was left empty, as a tribute.

Mark Whitaker was named the Washington D.C. Bureau Chief and was given "executive oversight" of Meet the Press.

Brian Williams, the NBC Nightly News anchor, acted as moderator of the first show back after the June 15 memorial broadcast, with the same guests and subject matter that Russert was planning for when he died.[18]

Following Russert's death, Tom Brokaw was named the interim moderator through the 2008 general elections.[19] Brokaw followed Russert's tradition by signing off with "We'll be back next Sunday because if it's Sunday, it's Meet the Press." In September the show was presented with limited commercials.

On August 10, David Gregory moderated the panel discussion during the second half-hour of the broadcast while Brokaw anchored the first half-hour from the Olympics in Beijing. The following week on August 17, he moderated the entire show. It was also reported on December 1, 2008, that the December 7 broadcast would be Brokaw's last, with David Gregory taking over full time the following Sunday.[20]

The set utilized from 1997–2010 had been designed as an experimental set for high definition broadcasting and several episodes of the series (including the first broadcast of a regular series on a major television network in HD) had aired in the format in the 1990s over experimental HD station WHD-TV in Washington.[21] However the show remained in 480i standard definition television over the NBC network itself despite this. On May 2, 2010 the show became the last NBC News program to convert to HD, and unveiled a new set consisting of large video screens mostly used to display Washington scenery, satellite interview subjects and moderator and subject talking points, along with graphics made for the format.[22]

Locations (outside of DC studios)

The following is a partial list of notable guests and milestones for the show.[1]

‹ The template below (NBCNetwork Shows (current and upcoming)) is being considered for deletion. See templates for discussion to help reach a consensus.›
Categories: