Highbury Avenue is an arterial road/expressway located in London and St. Thomas, Ontario. The speed limit, on the expressway portion is 100 km/h.[1]

For the citizens who live and work in both cities, Highbury Avenue is considered an essential commuter route between both cities and also to Highway 401 and Highway 402. 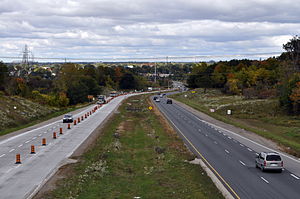 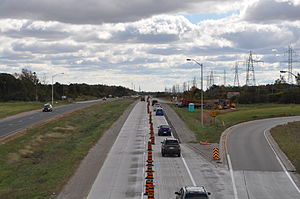 The Highbury Avenue expressway seen from the Commissioners Road overpass looking north and south respectively. The concrete southbound lanes were being rehabilitated at the time these photos were taken.

Highbury Avenue begins at South Edgeware Road in St. Thomas where it proceeds north as a two lane highway (Elgin County Road 30) until Wilton Grove Road in London. From there it briefly becomes a four-lane, 4.5 km (2.8 mi) expressway north from Highway 401 to Hamilton Road.[2] It then continues north as a four-lane arterial street through the rest of London.

In 1989, the interchange at the intersection of Bradley Avenue and Highbury was completed. In 1991, responsibility for Highway 126 was transferred from the provincial government to the City of London. Later in 1994, the Highbury Avenue interchange and overpass at Highway 401 was reconstructed. The reconstruction led to the cloverleaf interchange being converted to a Parclo-A4 interchange configuration with traffic lights, no longer being completely controlled-access (freeway-to-freeway).

The following table lists the major intersections along the portion of Highbury Avenue that was once assumed by the Ministry of Transportation of Ontario. The road continues north and south of these points, but distances are not available.