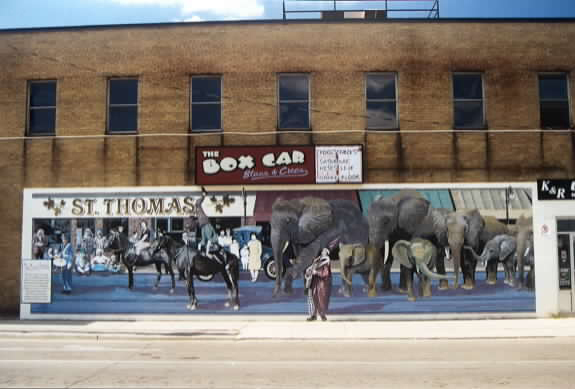 imagesize =
image_caption = Circus mural with Jumbo on the northwest corner of the Manitoba St. and Talbot St. intersection.

St. Thomas is a city in , . It is the seat for Elgin County and gaining its city on , .

In the late 19th century and early 20th century several railways were constructed through the city, and St. Thomas became an important railway junction. A total of 26 railways have passed through the city since the first railway was completed in 1856. It has earned the title of the "Railway Capital of Canada." In the 1950s and 1960s, with the decline of the railway as a mode of transportation, other industry began to locate in the city, principally primary and secondary automotive manufacturing.

(the elephant) died here on September 15, 1885, when a train crashed into him. There is a life-sized commemorative statue that was erected in 1985, on the centennial of Jumbo's demise.

The city was named after Thomas Talbot who helped promote the development of this region during the early 19th century.

Cliff Barwick is the current mayor of St. Thomas. The City Council consists of the mayor and seven Aldermen, all elected at large.

, which includes both conventional bus service and paratransit, is owned by the city and staffed and operated by .

St. Thomas has several media outlets based in the city. The "" is the city's newspaper, owned by . has a local channel. A low-power station &mdash; , 90.1 MHz &mdash; broadcasts religious activities from Faith Baptist Church of St. Thomas.

, branded as "103.1 Fresh FM", is also licensed to St. Thomas, although its programming largely targets the larger London market.

Although the city does not have its own television station, Industry Canada has allocated channel 33 for future use in St. Thomas.

Recently, Rogers Communications open a station on Talbot Street in the downtown area. The station is STTV, and is located on dial position 13.

There are two major parks in the city: Pinafore Park in the south, beside Pinafore Lake; and Waterworks Park in the north, which is straddled by Kettle Creek and the Waterworks Reservoir nearby.

The goes through St. Thomas, with a pavilion located in Jonas Street Park.