CUDA or Compute Unified Device Architecture[1] is a parallel computing architecture developed by Nvidia. CUDA is the computing engine in Nvidia graphics processing units (GPUs) that is accessible to software developers through variants of industry standard programming languages. Programmers use 'C for CUDA' (C with Nvidia extensions and certain restrictions), compiled through a PathScale Open64 C compiler,[2] to code algorithms for execution on the GPU. CUDA architecture shares a range of computational interfaces with two competitors -the Khronos Group's OpenCL[3] and Microsoft's DirectCompute.[4] Third party wrappers are also available for Python, Perl, Fortran, Java, Ruby, Lua, MATLAB, and IDL, and native support exists in Mathematica.

CUDA gives developers access to the virtual instruction set and memory of the parallel computational elements in CUDA GPUs. Using CUDA, the latest Nvidia GPUs become accessible for computation like CPUs. Unlike CPUs however, GPUs have a parallel throughput architecture that emphasizes executing many concurrent threads slowly, rather than executing a single thread very quickly. This approach of solving general purpose problems on GPUs is known as GPGPU.

In the computer game industry, in addition to graphics rendering, GPUs are used in game physics calculations (physical effects like debris, smoke, fire, fluids); examples include PhysX and Bullet. CUDA has also been used to accelerate non-graphical applications in computational biology, cryptography and other fields by an order of magnitude or more.[5][6][7][8] An example of this is the BOINC distributed computing client.[9]

CUDA provides both a low level API and a higher level API. The initial CUDA SDK was made public on 15 February 2007, for Microsoft Windows and Linux. Mac OS X support was later added in version 2.0,[10] which supersedes the beta released February 14, 2008.[11] CUDA works with all Nvidia GPUs from the G8x series onwards, including GeForce, Quadro and the Tesla line. CUDA is compatible with most standard operating systems. Nvidia states that programs developed for the G8x series will also work without modification on all future Nvidia video cards, due to binary compatibility. 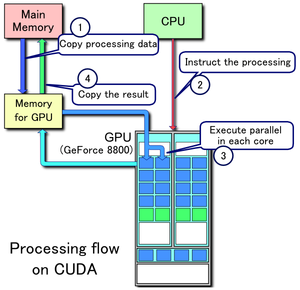 The GPU, as a specialized processor, addresses the demands of real-time high-resolution 3D graphics compute-intensive tasks. As of 2011[update] GPUs have evolved into highly parallel multi core systems allowing very efficient manipulation of large blocks of data. This design is more effective than general-purpose CPUs for algorithms where processing of large blocks of data is done in parallel, such as:

For instance, the parallel nature of molecular dynamics simulations is suitable for CUDA implementation.[12]

A table of devices officially supporting CUDA (Note that many applications require at least 256 MB of dedicated VRAM, and some recommend at least 96 cuda cores).[14]

This example code in C++ loads a texture from an image into an array on the GPU:

Below is an example given in Python that computes the product of two arrays on the GPU. The unofficial Python language bindings can be obtained from PyCUDA.

Additional Python bindings to simplify matrix multiplication operations can be found in the program pycublas.

The current generation CUDA architecture (codename: "Fermi") which is standard on Nvidia's released (GeForce 400 Series [GF100] (GPU) 2010-03-27)[20] GPU is designed from the ground up to natively support more programming languages such as C++. It has eight times the peak double-precision floating-point performance compared to Nvidia's previous-generation Tesla GPU. It also introduced several new features[21] including: