Source is a 3D game engine developed by Valve Corporation. It debuted in June 2004 with Counter-Strike: Source and shortly thereafter Half-Life 2, and has been in active development ever since. Unusually for a game engine, Source was designed to receive constant incremental updates and does not have a meaningful version numbering scheme.[1]

Source was created to evolve incrementally as technology moves onwards, as opposed to the backwards compatibility-breaking "version jumps" of its competitors. With Steam, Valve can distribute automatic updates with new versions of the engine among its many users.

In practice however, there have been occasional breaks in this chain of compatibility. The release of Half-Life 2: Episode One and The Orange Box both introduced new versions of the engine that could not be used to run older games or mods without the developers performing upgrades to code and, in some cases, content. But both times the work required to move from the older version to the newer was significantly less than what one might have come to expect from other engines. This was demonstrated in 2010 when Valve updated all of their core Source games to the very latest engine build.[16]

Since Source's release in 2004, the following major architectural changes have been made:

High dynamic range rendering (2005, Day of Defeat: Source)
Simulation of a camera aperture and the ability to fake the effects of brightness values beyond computer monitors' actual range. Required all of the game's shaders to be rewritten.[17]
"Soft" particles (2007, The Orange Box)
An artist-driven, threaded particle system replaced previously hard-coded effects.[5]
Hardware facial animation (2007, The Orange Box)
Hardware accelerated on modern video cards for "feature film and broadcast television" quality.[6]
Multiprocessor support (2007, The Orange Box)
A large code refactoring allowed the Source engine to take advantage of multiple CPU cores on the PC, Xbox 360 and Playstation 3.[18] On the PC, support was experimental and unstable[19] until the release of Left 4 Dead.[20] Multiprocessor support was later backported to Team Fortress 2 and Day of Defeat: Source.[21]
Xbox 360 support (2007, The Orange Box)
Valve created the Xbox 360 release of The Orange Box in-house, and support for the console, unlike support for the PlayStation 3, is fully integrated into the main engine codeline. It includes asset converters, cross-platform play and Xbox Live integration.[22] Program code can be ported from PC to Xbox 360 simply by recompiling it.[23]
Mac OS X support (2010, multiple games)
In April 2010 Valve released all of their major Source games on Mac OS X. All future Valve games will be released simultaneously for Windows and Mac.[24][25] Games will only use Direct3D on Windows, and only OpenGL on the other platforms.
PlayStation 3 support (2011, Portal 2)
Source first appeared on the PlayStation 3 in 2007, but with an engine port that was created externally and which was plagued with issues. Valve took the problem in-house for Portal 2, and in combination with Steamworks integration created what they called "the best console version of the game".[26]

As of May 2011, one of Valve's largest projects is developing new content authoring tools for Source.[1] These will replace the engine's current set of aging tools, allowing content to be created faster and more efficiently. Studio head Gabe Newell has explained that the way in which content is made in the engine's current version as "very painful" and "sluggish".[28]

An in-process tools framework was created in 2007, and is currently used by the engine's particle editor and by Source Filmmaker (see below).

The tool used to create Team Fortress 2's "Meet the Team" videos as well as Left 4 Dead's introduction videos is the "Source Filmmaker", a video capture and editing application that works from inside the engine.[29] It allows users to record themselves many times over in the same scene, creating the illusion of many participants, as well as supporting a wide range of cinematographic effects and techniques such as motion blur, Tyndall effects, Dynamic Lighting, and depth of field. (Motion blur has now been added to the games themselves, though only when the view is moving at high speeds—not per-object as in the film-maker.) It also allows manual animation of bones and facial features, allowing the user to create scenes that can't happen in-game. This tool is expected to be released to the public upon release of "Meet the Pyro", the final "Meet the Team" video.[citation needed] Currently this tool can be found in the very first release of Team Fortress 2, but there is no official support for it. A limited version of this functionality is currently encapsulated in Team Fortress 2 as a Replay feature; it is limited to capturing the actual events occurring over the course of a player's life with no ability to modify actions, repeat segments, nor apply special effects beyond those already used in-game. However, arbitrary camera angles are possible, as is tracking the actions of any other player in action at the time. Replay incorporates the ability to upload completed videos to YouTube.

Image-based rendering technology had been in development for Half-Life 2[30] but was cut from the engine before its release. It was mentioned again by Gabe Newell in 2006 as a piece of technology he would like to add to his company's engine in order for them to support far larger scenes than are possible with strictly polygonal objects.[31] 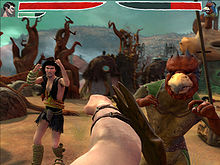 Source distantly originates from the GoldSrc engine, itself a heavily modified version of John D. Carmack's Quake engine, as is explained by Valve employee Erik Johnson on the Valve Developer Community:[32]

Source was developed part-by-part from this fork onwards, slowly replacing GoldSrc in Valve's internal projects[33] and explaining in part the reasons behind its unusually modular nature. Valve's development of Source since has been a mixture of licensed middleware (Havok Physics, albeit heavily modified, and MP3 playback) and in-house-developed code.

John Carmack commented on his blog in 2004 that "there are still bits of early Quake code in Half-Life 2".[34]

Valve is currently creating a new set of tools.

The Source SDK tools are criticised for being outdated and difficult to use.[35][36] A large number of the tools, including those for texture and model compilation, require varying levels of text-editor scripting from the user before they are executed at the command line with sometimes quite lengthy console commands.[37] This obtuseness was cited by the University of London when they moved their exploration of professional architectural visualisation in computer games to Bethesda Softworks' Gamebryo-based Oblivion engine after a brief period with Source.[38] Third-party tools provide GUIs,[39] but are not supported by Valve.

The interface of Valve's Hammer Editor, the SDK's world-creation tool, has not changed significantly since its initial release for GoldSrc and the original Half-Life in 1998.