Charles University in Prague
For other uses, see University of Prague (disambiguation).

Its seal shows its protector, Emperor Charles IV, with his coats of arms as King of the Romans and King of Bohemia kneeling in front of St. Wenceslas, the patron saint of Bohemia. It is surrounded by the inscription, Sigillum Universitatis Scolarium Studii Pragensis (English: Seal of the Prague academia, Czech: Pečeť studentské obce pražského učení).[2]

Monument to the protector of the university, Emperor Charles IV

The establishment of a medieval university in Prague was inspired by Roman-German Emperor Charles of Luxembourg.[3] He asked his friend and ally, Pope Clement VI, to do so. On 26 January 1347 the pope issued the bull establishing a university in Prague, modeled on the University of Paris, with the full (4) number of faculties, that is including theological. On 7 April 1348 Charles, the king of Bohemia, gave to the established university privileges and immunities from the secular power in a Golden Bull[4] and on 14 January 1349 he repeated that as the King of the Romans. Most Czech sources since the 19th century—encyclopedias, general histories, materials of the University itself—prefer to give 1348 as the year of the founding of the university, rather than 1347 or 1349. This was caused by an anticlerical shift in the 19th century, shared by both Czechs and Germans.

The university was actually opened in 1349. The university was sectioned into parts called nations: the Bohemian, Bavarian, Polish and Saxon. The Bohemian natio included Bohemians, Moravians, southern Slavs, and Hungarians; the Bavarian included Austrians, Swabians, natives of Franconia and of the Rhine provinces; the Polish included Silesians, Poles, Russians; the Saxon included inhabitants of the Margravate of Meissen, Thuringia, Upper and Lower Saxony, Denmark, and Sweden.[5] Ethnically Czech students made 16 – 20 % of all students.[6] Archbishop Arnošt of Pardubice took an active part in the foundation by obliging the clergy to contribute and became a chancellor of the university (i.e., director or manager).

The first graduate was promoted in 1359. The lectures were held in the colleges, of which the oldest was named for the king the Carolinum, established in 1366. In 1372 the Faculty of Law became an independent university.[7]

In 1402 Jerome of Prague in Oxford copied out the Dialogus and Trialogus of John Wycliffe. The dean of the philosophical faculty, Jan Hus, translated Trialogus into the Czech language. In 1403 the university forbade its members to follow the teachings of Wycliffe, but his doctrine continued to gain in popularity.

In Western Schism, the Bohemian natio took the side of king Wenceslaus and supported the Council of Pisa (1409). The other nationes of the university declared their support for the side of Pope Gregory XII, thus the vote was 1:3 against the Bohemians. Hus and other Bohemians, though, took advantage of Wenceslaus' opposition to Gregory. By the Decree of Kutná Hora (German: Kuttenberg) on 18 January 1409, the king subverted the university constitution by granting the Bohemian masters three votes. Only a single vote was left for all other three nationes combined, compared to one vote per each natio before. The result of this coup was the emigration of foreign (mostly German) professors and students, founding the University of Leipzig in May 1409. Before that, in 1408, the university had about 200 doctors and magisters, 500 bachelors, and 30,000 students; it now lost a large part of this number, accounts of the loss varying from 5000 to 20,000 including 46 professors.[5] In the autumn of 1409, Hus was elected rector of the now Czech-dominated rump university.

Thus, the Prague university lost the largest part of its students and faculty. From then on the university declined to a merely regional institution with a very low status.[8] Soon, in 1419, the faculties of theology and law disappeared, and only the faculty of arts remained in existence.

The faculty of arts became a centre of the Hussite movement, and the chief doctrinal authority of the Utraquists. No degrees were given in the years 1417–30; at times there were only eight or nine professors.[5] Emperor Sigismund, son of Charles IV, took what was left into his personal property and some progress was made. The emperor Ferdinand I called the Jesuits to Prague and in 1562 they opened an academy—the Clementinum. From 1541 till 1558 the Czech humanist Mattheus Collinus (1516–1566) was a professor of Greek language.[9] Some progress was made again when the emperor Rudolph II took up residence in Prague. In 1609 the obligatory celibacy of the professors was abolished.[10] In 1616 the Jesuit Academy became a university. (It could award academic degrees.)[10]

Jesuits were expelled 1618–1621 during the early stages of the Thirty Years' War, which was started in Prague by anti-Catholic and anti-Imperial Bohemians. By 1622 the Jesuits had a predominant influence over the emperor. An Imperial decree of 19 September 1622 gave the Jesuits supreme control over the entire school system of Bohemia, Moravia and Silesia. The last four professors at the Carolinum resigned and all of the Carolinum and nine colleges went to the Jesuits. The right of handing out degrees, of holding chancellorships and of appointing the secular professors was also granted to the Jesuits. 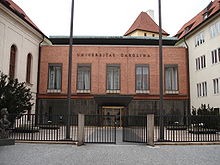 Façade of the aula of the university.

Cardinal Ernst Adalbert von Harrach actively opposed union of the university with another institution and the withdrawal of the archiepiscopal right to the chancellorship and prevented the drawing up of the Golden Bull for the confirmation of the grant to Jesuits. Cardinal Ernst funded the Collegium Adalbertinum and in 1638 emperor Ferdinand III limited the teaching monopoly enjoyed by the Jesuits. He took from them the rights, properties and archives of the Carolinum making the university once more independent under an imperial protector. During the last years of the Thirty Years' War the Charles Bridge in Prague was courageously defended by students of the Carolinum and Clementinum. Since 1650 those who received any degrees took an oath to maintain the Immaculate Conception of the Blessed Virgin, renewed annually.

On 23 February 1654 emperor Ferdinand III merged Carolinum and Clementinum and created a single university with four faculties—Charles-Ferdinand University.[11] Carolinum had at that time only the faculty of arts, as the only faculty surviving the period of the Hussite Wars. Starting from this time the university designated itself Charles-Ferdinand University (Universitas Carolo Ferdinandea). The dilapidated Carolinum was rebuilt in 1718 at the expense of the state.

The rebuilding and the bureaucratic reforms of universities in the Habsburg monarchy in 1752 and 1754 deprived the university of many of its former privileges. In 1757 a Dominican and an Augustinian were appointed to give theological instruction. However, there was a gradual introduction of enlightened reforms, and this process culminated at the end of the century when even non-Catholics were granted the right to study. On 29 July 1784 German replaced Latin as the language of instruction.[12] For the first time Protestants were allowed, and soon after Jews. The university acknowledged the need of a Czech language and literature chair. Emperor Leopold II established it by a courtly decree on 28 October 1791. On 15 May 1792 Franz Martin Pelzel (1734–1801)[13] was named the professor of the chair. He started his lectures on 13 March 1793.[14]

In the revolution of 1848, German and Czech students fought for the addition of the Czech language at the Charles-Ferdinand University as a language of lectures. Due to the demographic changes of the 19th century, Prague ceased to have a German-language majority around 1860. By 1863, 22 lecture courses were held in Czech, the remainder (out of 187) in German. In 1864, Germans suggested the creation of a separate Czech university. Czech professors rejected this because they did not wish to lose the continuity of university traditions.

Split into Czech and German universities 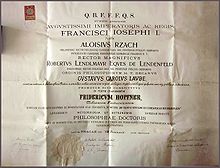 Doctoral diploma of the astronomer Friedrich Hopfner, issued 1905 by the German Charles-Ferdinand University in Prague

The Czechs were not satisfied with bilingual status and proposed restitution of nationes, but on ethnic principle: German and Czech. Germans vetoed it and proposed a split of the University. After long negotiations the Carolo-Ferdinandea was divided into a German Charles-Ferdinand University and a Czech Charles-Ferdinand University when the Viennese parliament adopted the act and the emperor sanctioned it on 28 February 1882.[15] Each section was entirely independent of the other and enjoyed the same status. The two universities shared medical and scientific institutes, the old insignia, aula, library, and botanical garden, but common facilities were administrated by the German University. The first rector of the Czech University became Václav Vladivoj Tomek.

The highpoint of the German University was the era preceding the First World War, when it was home to world-renowned scientists such as physicist and philosopher Ernst Mach, Moritz Winternitz, Albert Einstein. In addition, the German-language students included prominent individuals such as future writers Max Brod, Franz Kafka, and Johannes Urzidil.[16]

Even before the Austro-Hungarian Empire was abolished in late 1918, to be succeeded by Czechoslovakia, Czech politicians demanded that the insignia of 1348 were exclusively to be kept by the Czech university.[citation needed] The Act No. 197/1919 Sb. z. a n. established the Protestant theological faculty, but not as a part of the Charles University[17] which is since 10 May 1990 Charles University faculty.[18] In 1920 the so-called Lex Mareš (No. 135/1920 Sb. z. a n.) was issued, named for its initiator professor of physiology František Mareš, determining that the Czech university was to be the successor to the original university.[19] Dropping the Habsburg name Ferdinand, it designated itself Charles University, while the German university was not named.

In 1921 the Germans considered moving[20] their university to Liberec (German: Reichenberg) in northern Bohemia. In 1930, about 42,000 inhabitants of Prague spoke German as their native language, while millions lived in northern Bohemia near the border to Germany.

The tides turned in 1938, when following the Munich agreement, German troops entered the border areas of Czechoslovakia (the so-called Sudetenland), as did Polish and Hungarian troops elsewhere. On 15 March 1939 Germans forced Czecho-Slovakia to split apart and the Czech lands were occupied by Nazis as the Protectorate of Bohemia and Moravia. Reichsprotektor Konstantin von Neurath handed the historical insigniae to the German University which was officially named as Deutsche Karls-Universität in Prag. Since 1 September 1939 the German University was subordinated to the Reichsministry of Education in Berlin and on 4 November 1939 it was proclaimed to be Reichsuniversität.[21]

On 28 October 1939 during a demonstration, Jan Opletal was shot. His burial on 15 November 1939 became a demonstration as well.[22] On 17 November 1939 (now marked as International Students' Day) the Czech University and all other Czech higher-education institutions were closed for 3 years, but remained closed until the end of the War. Nine student leaders were executed and about 1,200 Czech students were interned in Sachsenhausen and not released until 1943. About 20[23] or 35[24] interned students died in the camp. On 8 May 1940 the Czech University was officially renamed into Czech Charles University (Czech: Česká universita Karlova) by the government regulation 188/1940 Coll.

The World War II marks the end of the coexistence of the two universities in Prague. The remainders of the German University transferred to Munich and continues its existence as Collegium Carolinum.[25] Seal of the 1st Faculty of Medicine

Seal of the Protestant Theological Faculty

Although the university began to recover rapidly after 1945, it did not enjoy academic freedom for long. After the communist coup in 1948, the new regime started to arrange purges and repress all forms of disagreement with the official ideology, and continued to do so for the next four decades, with the second wave of purges during the "normalization" period in the beginning of the 1970s. Only in the late 1980s did the situation start to improve; students organized various activities and several peaceful demonstrations in the wake of the Revolutions of 1989 abroad. This initiated the "Velvet Revolution" in 1989, in which both students and faculty of the university played a large role. Václav Havel—a writer, dramatist and philosopher—was recruited from the independent academic community and appointed president of the republic in December 1989.