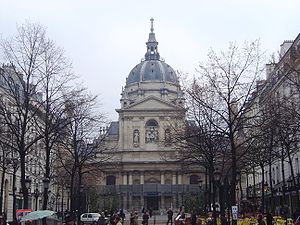 Pantheon-Sorbonne University[2] or Paris 1 is a university in Paris, France. With eight hundred years of excellence to build on, the University of Paris 1 Panthéon-Sorbonne, a descendant of the Sorbonne and the Faculty of Law and Economics of Paris, is one of the largest universities in France today. Some forty thousand students are enrolled in 14 teaching and research departments (Unités de Formation et de Recherche) and 5 Institutes, which offer top level degree courses in law, political science, economics, management and the humanities.

The university is located in the heart of the Latin quarter and occupies part of the Sorbonne and other prestigious French university buildings. It aims to be a major pole of research and learning in Europe in the 21st century. In 2011, it was ranked among the Top 100 Universities by Reputation in the Times Higher Education World University Rankings.[3] 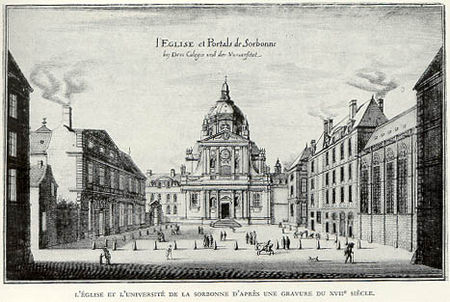 The Sorbonne in the 17th century

After the ideological, cultural and social fever which took hold of France in May and June 1968, a new university scene emerged; the law of November 12, 1968 instituted autonomous, pluridisciplinary universities.

The University Paris 1 was founded on the basis of a profound wish for change to produce an original academic project bringing together the humanities, law and economics. Instead of having separate faculties of laws, economics or humanities, the university was divided into much more specialised UFRs. For instance the UFR of international law has the same relationship with the UFR of geology as with the UFR or commercial law. This was a revolutionary change, as those subjects had previously been taught in highly distinct and hierarchal faculties. To the traditional degree courses in France in history, geography, philosophy, art history, archaeology, economics, law and political science, new disciplines were gradually added, including the visual arts, mathematics applied to social sciences, business management, tourism, culture and communications.

The name of the university embodies this triple tradition : the Sorbonne is the traditional seat of the Humanities studies in Paris (hence it is also used by Paris III and Paris IV, other Humanities university) and the Place du Panthéon Building is the seat of the Law studies (hence it is also used by Paris II). Economics Studies had no traditional seat, as they were taught by law faculties. 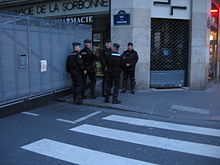 Barricade and police around the Sorbonne (during the spring 2006 students' protests).

The University of Paris I occupies some of the most prestigious university buildings in France. Since the sixties, the university has expanded at an unprecedented rate and has built on or acquired nearly twenty new sites in the capital and immediate suburbs.

The main buildings are the Centre Pierre Mendès France, the Centre René Cassin, the Centre Saint-Charles, the Centre Arago which houses the new International Relations Building; the research centers have been relocated, in particular in the Rue Malher and the Boulevard de l’Hôpital, where the Economics Building is currently located.

The University Paris 1 is the biggest university in France where the humanities and social sciences can be studied.

There are three main families of subjects:

All legal studies merged into Sorbonne Law School in 2009.

In addition, there are a number of institutes:

Research at the University

The following sampling of statistics demonstrate the importance of research at Paris 1:

The eleven hundred members of faculty, 200 researchers who are attached to major research institutions, mainly the CNRS (National Centre for Scientific Research), and 150 technical and administrative staff are grouped in 68 research groups recognised by the CNRS and the Ministry of Education and Research.

Every year around 400 PhD theses are defended and 1,700 pre-PhD post-graduate degrees are awarded in 74 subjects divided between 15 graduate schools.

The scope of research is vast, as can be seen by the number and variety of high quality conferences and colloquia organised by the different research centres. The themes provide a meeting point between science and culture and cover different aspects of the relationships between the individual and society.

Research programs exist in economics, management and applied mathematics; in law and politics; in philosophy and the arts; in history, art history and archaeology; in geography, demography and sociology, to name but some.

The University Paris 1 is responsible for one of the largest documentary resource centres in France.

The Sorbonne library has a collection of almost three million books, 100,000 of which are more than 200 years old, and 17,500 periodicals covering all the humanities. The library and map collection of the Geography Institute are the oldest such collection in France.

In addition, the 400,000 volumes in the specialist libraries offer users one of the largest collections in France and in Europe.

The Cujas Library, co-administered with Paris II, with its computerised documentation service, provides access to over 500 data banks and is the largest law and economics library in France.

The new Economics Building houses another resource centre, and the library at the Centre Pierre Mendès France offers students free access to its large collection.

The University Paris 1 has signed over 150 conventions with foreign universities across five continents. These exchanges revolve around international networks such as Europaeum which bring together some of Europe's best universities in Oxford, London, Bologna, Bonn, Geneva, Helsinki, Leiden and Prague. The University of Paris 1 also heads a number of consortia which bring together French universities and professional organisations. The consortia are responsible for major international projects in Bucharest, Buenos Aires, Cairo, Istanbul (Galatasaray), and Moscow.

Six thousand international students, mainly from Europe, come to study as part of the SOCRATES or TEMPUS programmes. African students are joined by increasing numbers from Asia and America, and take part in specific programs organised in conjunction with universities across the world.

Staff mobility is another priority and every year some 130 academics from foreign universities come to teach and do research at the University of Paris 1.

In the global 2011 QS World University Rankings, the University is ranked 213th overall, ranking 34th for Arts and Humanities and 42nd for Social Sciences.[4] A human competitiveness index & analysis by the Human Resources & Labor Review, and published in Chasecareer Network, ranked the University of Paris system 33rd internationally in 2010.[5]