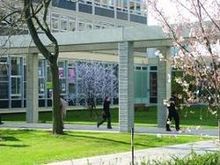 Nanterre was built in the 1960s on the outskirts of Paris as an extension of the Sorbonne. Based on the American model, it was created as a campus (as opposed to the old French universities which were smaller and integrated to the city they were in).

Nanterre became famous shortly after its opening by being at the center of the May 68 student rebellion. The campus was nicknamed "Nanterre, la folle" (Mad Nanterre) or "Nanterre la rouge" (Red Nanterre, in reference to communism). To this day, the university remains traditionally a center of the left wing, as opposed to universities such as Paris II-Assas, traditionally inclined to the right.

Nanterre is the second largest campus in France after Nantes, with its own Olympic-sized swimming pool and a stadium. It welcomes 35 to 40,000 students every year in all fields of studies: Social Sciences, Philosophy, Literature, History, Languages and Linguistics, Economics, Law and Political Sciences, as well as Teacher Training, Acting, Cinema, Physiology and Sports.

The university is renowned in the fields of Law and Economics. Even though French universities are required by law to admit anyone with a Baccalauréat, strain is put on the students from the start and the first year drop-out rate consistently hovers in the 60% region. At postgraduate level, the university offers very competitive programs (highly selective Masters in Law and Business) and partnerships with some grandes écoles such as the Ecole Polytechnique, ESSEC, Ecole des Mines de Paris, ESCP Europe ...

As in most Parisian universities, there is a large minority of foreign exchange students.