It is believed that the name Corinda originates from a local cattle station owned by Sir Arthur Palmer, which he named after his Corinda pastoral station near Aramac.

Corinda was first settled in the 1860s as a small farming community, among the original settlers was the Francis family who purchased 21 acres in 1862, which extended from the Brisbane River to Francis Lookout, a local heritage listed[2] landmark on Dewar Terrace which survives and includes a small burial ground opened in 1862[3], its 10 graves include those of some of the pioneer settlers. The oldest of the graves is of Clement Francis who died in 1863. The lychgate, erected by Angela Francis dates to 1902. Most of the original older-style Queenslander homes date back to the colonial period and were built high on the hills around the lookout.

The first rail line opened in 1874. A small commercial district on Oxley Road gradually grew around it. The Corinda School of Arts (now municipal library) is one of the earliest surviving buildings on this strip and is a small timber structure built in 1895. The commercial district rapidly developed after the 1920s. Many large bungalow styled homes were built on the floodplain toward Oxley Creek during this time.

The Corinda RSL was established in 1964 and now trades as the Sherwood Services Club[4]. With the opening of Coles Supermarkets, the commercial centre has continued to develop and extend westward.

Corinda has two main parks both sharing the same name but separated at either end of the suburb. One is a forest reserve along the Brisbane River which includes Carrington Rocks and Carrington Boat Club. The other is on the floodplain of Oxley Creek near the bowls club and state school. The historic Francis Lookout reserve has another small park used for the traditional local Carols by Candlelight celebrations run by various local church and school groups. The Sherwood Arboretum borders the suburb but is located in Sherwood. 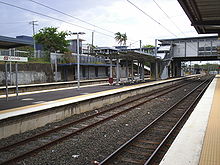 The Corinda railway station provides residents with easy access to the Brisbane CBD, servicing many suburbs and providing access to many popular entertainment and educational venues along the way including the Indooroopilly Shopping Centre and the University of Queensland. There is also a less frequent bus service (Bus 104) to Tennyson railway station|Tennyson] after changes to transport planning in July 2011.

There are two private schools in Corinda - St Aidan's Anglican Girls School (Prep to Year 12) near the railway station, and St Joseph's Catholic School (Prep to Year 7) near the Corinda Village Shopping Centre. The public primary schools (Corinda State Primary School) established in 1927 and high school (Corinda State High School) established in 1960 are towards the southern end of Corinda.