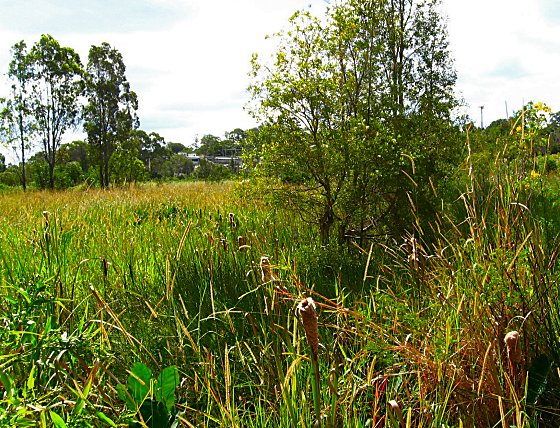 Sunnybank is both an area or district and a suburb in ,, . The suburb of Sunnybank is only a small part of the area generally known as Sunnybank, which also includes Banoon, Nathan, Robertson, MacGregor, Runcorn, and Sunnybank Hills. Fact|date=February 2008

Rolling hills and the headwaters for both Stable Swamp Creek and Bulimba Creek have drawn people and wildlife to the Sunnybank area.

The Indigenous people are believed to be the first to inhabit the area. The Sunnybank district was a farming area from the mid 1800s. With rich, red soil, it was highly productive.

Sunnybank in the 1800s was part of a much larger area known as Coopers Plains. In 1885, the railway line was extended from Yeerongpilly, and names had to be given to the railway stations along the line. [cite book |title=Stories of the Southside |last=Roberts |first=Beryl |authorlink= |coauthors= |year=1991 |publisher=Aussie Books |location=Archerfield, Queensland |isbn=094733601X |pages=16 ] Sunnybank got its name from a local farm, Sunnybrae, owned by the Gillespies, when two acres of land were taken over for the railway. "Brae" is Scottish for the English word "bank", so the area was given boundaries and named Sunnybank.

By the first part of the 20th century, farmland increasingly gave way to suburbia. General Motors Holden established a car manufacturing plant on Bradman Street at Acacia Ridge, creating a major source of employment for the entire city of Brisbane.

With the Commonwealth games being held in 1982 at the Queen Elizabeth II sporting complex (QE II), now known as the (QSAC), and years later, Brisbane and its suburbs like Sunnybank were shown to the world.

With new land releases rare in the region, developers have turned to building higher density residential and commercial projects.

In the early 1980s, an increasing number of Asian immigrants began to settle in Sunnybank and neighbouring suburbs. When this happened the look of the area changed, especially in the outlying business district of Sunnybank at the intersection of Mains Road and McCullough Street, where Asian restaurants and businesses are numerous.

Sunnybank is today a thriving multicultural suburb, with strong Asian influences in design, food and culture. Many of the suburb's shops and businesses are owned and run by Asian people.

Sunnybank is a busy area, and there have been ever-growing traffic problems in the area. Mains Road can become gridlocked around peak-hour, packed with cars and buses, as commuters make the slow ride home, although construction has widened and improved the Mains Road bridge which crosses the train line at Altandi.

Sunnybank has many churches, including Catholic, Anglican, Uniting, and Churches of Christ. [http://ministryblue.com/church-sunnybank.html] Schools in the area include , (Catholic), Macgregor State School and Macgregor State High School.

A shopping centre, , is located at the intersection of Mains Road and McCullough Street and is anchored by Kmart, Coles and a cinema complex. Other retail areas include , , and . Sunny Park Shopping Centre was previously anchored by a discount department store, which to date is the only store in Brisbane that has closed.

Sunnybank is home of the Sunnybank Dragons Rugby Club and the Souths Sunnybank .

Sunnybank plaza has a large bus station, which serves as one of the major stops on most bus routes in the area. operates a train service through the Sunnybank area. The Beenleigh railway line runs through the area, and in the Sunnybank area the train stations include (in order, going out-bound) Banoon, Sunnybank, Altandi and Runcorn. The bus stop outside Altandi railway station is also a popular bus stop along Mains Road.