Oliver Burgess Meredith (November 16, 1907[1][2] – September 9, 1997),[3] known professionally as Burgess Meredith, was an American actor in theatre, film, and television, who also worked as a director. Active for more than six decades,[4] Meredith has been called "a virtuosic actor"[5] who was "one of the most accomplished actors of the century."[6] Meredith won several Emmys[7] and was nominated for Academy Awards.[7]

He graduated from Hoosac School in 1926 and then attended Amherst College as a member of the Class of 1931. Meredith served in the United States Army Air Forces in World War II, reaching the rank of captain. He was discharged in 1944 to work on the movie The Story of G.I. Joe, in which he starred as the popular war correspondent Ernie Pyle. [9]

In 1933, he became a member of Eva Le Gallienne's theatre company in New York City. Although best known to the larger world audience for his film and television work, Meredith was an influential actor and director for the stage. He made his Broadway debut as Peter in Le Gallienne's production of Romeo and Juliet (1930) and became a star in Maxwell Anderson's Winterset (1935), which became his film debut the following year. His early life and theatre work were the subject of a New Yorker profile.[10]

He received acclaim playing in the 1935 revival of The Barretts of Wimpole Street starring Katharine Cornell. She subsequently cast him in several of her later productions.

Other Broadway roles included Van van Dorn in High Tor (1937), Liliom in Liliom (1940), Christy Mahon in The Playboy of the Western World (1946), and Adolphus Cusins Major Barbara (1957). He created the role of Erie Smith in the English-language premiere of Eugene O'Neill's Hughie at the Theater Royal in Bath, England in 1963. He played Hamlet in avant-garde theatrical and radio productions of the play.[11]

A distinguished theatre director, he won a Tony Award nomination for his 1974 Broadway staging of Ulysses in Nighttown, a theatrical adaptation of the "Nighttown" section of James Joyce's Ulysses. Meredith also shared a Special Tony Award with James Thurber for their collaboration on A Thurber Carnival (1960). 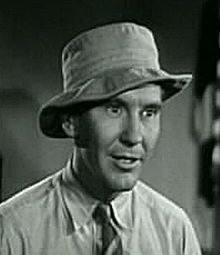 Early in his career, Meredith attracted favorable attention, especially for playing George in a 1939 adaptation of John Steinbeck's Of Mice and Men and as war correspondent Ernie Pyle in The Story of G.I. Joe (1945).

Meredith was featured in many 1940s films, including three -- Second Chorus (1940), Diary of a Chambermaid (1946) and On Our Merry Way (1948) -- co-starring then-wife Paulette Goddard. He also played alongside Lana Turner in Madame X.

As a result of the House Committee on Un-American Activities investigation into Communist influence in Hollywood, Meredith was placed on the Hollywood blacklist, resulting in a seven-year drought of work.

Meredith was a favorite of director Otto Preminger, who cast him in Advise and Consent (1962), In Harm's Way (1965), Hurry Sundown (1967), Skidoo (1968) and Such Good Friends (1971). He was the Penguin in the Batman movie of 1966 based on the TV series. Meredith played Rocky Balboa's trainer, Mickey Goldmill, in the first three Rocky films (1976, 1979 and 1982), to great acclaim. Even though his character died in the third Rocky film, he returned briefly in the fifth film, Rocky V (1990). He played an old Korean War veteran Captain J.G. Williams in The Last Chase with Lee Majors. He appeared in Ray Harryhausen's last stop-motion feature Clash of the Titans (1981), in a supporting role.

He was nominated for Academy Awards in the Best Supporting Actor category for his roles in The Day of the Locust (1975) and Rocky (1976). Another notable role was as Goldie Hawn's landlord in Foul Play (1978).

Meredith directed the movie The Man on the Eiffel Tower (1949) starring Charles Laughton, which was produced by Irving Allen. Meredith also was billed in a supporting role in this film. In 1970 he directed (as well as co-writing and playing a supporting role in) The Yin and the Yang of Mr. Go, an espionage caper starring James Mason as a Hong Kong crime lord and Jeff Bridges as an ambitious amoral draft dodging novelist.

He appeared in four different starring roles in the acclaimed anthology TV series The Twilight Zone. In the famous "Time Enough at Last", a 1959 episode of The Twilight Zone, Meredith plays a henpecked bank teller who only wants to be left alone with his books. In the 1961 episode "Mr. Dingle, the Strong", Meredith plays the title character, a timid weakling who, as the subject of a space alien's experiment on human nature, suddenly acquires superhuman strength. In "Printer's Devil," Meredith portrayed the Devil himself, and in "The Obsolete Man" he portrayed a librarian, sentenced to death in a future, dystopic totalitarian society. He would later play two more roles in Rod Serling's other anthology series, Night Gallery. Meredith was the narrator for Twilight Zone: The Movie in 1983. He did not receive on-screen credit for his narration (this was so that he could do the job for scale rather than charge his usual minimum fee); as compensation for Meredith's uncredited work, his name was inserted into the dialogue in a scene between Dan Aykroyd and Albert Brooks.

He appeared in various television programs, including the role of Chris, III, in the 1962 episode "Hooray, Hooray, the Circus Is Coming to Town" of the NBC medical drama about psychiatry, The Eleventh Hour starring Wendell Corey and Jack Ging. He also guest starred in the ABC drama about psychiatry, Breaking Point in the 1963 episode titled "Heart of Marble, Body of Stone".

In 1963, he appeared as Vincent Marion in a five-part episode of the last season of the Warner Brothers ABC detective series 77 Sunset Strip. He starred three times in Burke's Law (1963–1964), starring Gene Barry.

Burgess Meredith as the Penguin

Meredith also played The Penguin in the television series Batman. His role as the Penguin was so well-received that the show's writers always had a script featuring the Penguin ready whenever Meredith was available. He appeared on the show more times during its run than any other villain except for Cesar Romero's Joker who tied with Meredith for number of appearances on the show.

From 1972-73, Meredith played V.C.R. Cameron, director of Probe Control, in the television movie/pilot Probe and then in Search, the subsequent TV series (the name was changed to avoid conflict with a program on PBS). The series involved World Securities Corporation, a private agency which, among other activities, fielded a number of detectives equipped with high-tech equipment including a tiny TV transmitter (the "Scanner") which allowed Probe Control to see what was going on where the agents were working. One episode centered around Cameron being kidnapped and having to escape from a torture chamber, without any of the tools carried by Probe agents.[citation needed]

He won an Emmy Award as Outstanding Supporting Actor in a Comedy or Drama Special for the 1977 television film Tail Gunner Joe, a fictitious study of U.S. Senator Joseph R. McCarthy, the anti-communist leader of the 1950s. [12]

In the early 1980s, he was a co-host of the ABC program, Those Amazing Animals, and co-starred in the short lived CBS sitcom Gloria, a spin-off of All In The Family.

A somewhat more mixed (comedy/dramatic) role was his portrayal of the philosophical (yet hapless) tramp, Vladimir, in a notable TV production of Beckett's Waiting for Godot with Zero Mostel and Kurt Kasznar.

Meredith performed voiceover work. He provided the narration for A Walk in the Sun. As a nod to his longtime association with The Twilight Zone, he served as narrator for the 1983 film based on the series. He was the TV commercial voice for Bulova Watches, Honda, Stokley-Van Camp, United Airlines, and Freakies breakfast cereal.

He supplied the narration for the 1974–1975 ABC Saturday morning series Korg: 70,000 B.C. and was the voice of Puff in the series of animated adaptations of the Peter, Paul, and Mary song Puff, the Magic Dragon. In the mid-1950s, he was one of four narrators of the NBC and syndicated public affairs program, The Big Story (1949–1958), which focuses on courageous journalists. In 1991, he narrated a track on the The Chieftains' album of traditional Christmas music and carols, The Bells of Dublin.[citation needed]

His last role before his death was the portrayal of both Hamilton Wofford and Covington Wofford characters in the 1996 video game Ripper by Take-Two Interactive.

In 1994, Meredith published his autobiography, So Far, So Good. In the book he confessed that he suffered from violent mood swings which were caused by cyclothymia, a form of bipolar disorder.[2]

Meredith had four wives, including actresses Margaret Perry and Paulette Goddard. His last marriage (to Kaja Sundsten) lasted 46 years, and produced two children, Jonathon (a musician) and Tala (a painter).

Meredith was an outspoken liberal and clashed with Senator Joseph McCarthy, which led to him being blacklisted for a few years in the 1950s.

Meredith died from complications of Alzheimer's disease and melanoma on September 9, 1997. Long time friend Adam West spoke briefly at his memorial service. Meredith's remains were cremated. For his contribution to the motion picture industry, Burgess has a star on the Hollywood Walk of Fame at 6904 Hollywood Boulevard, Los Angeles, CA 90028.