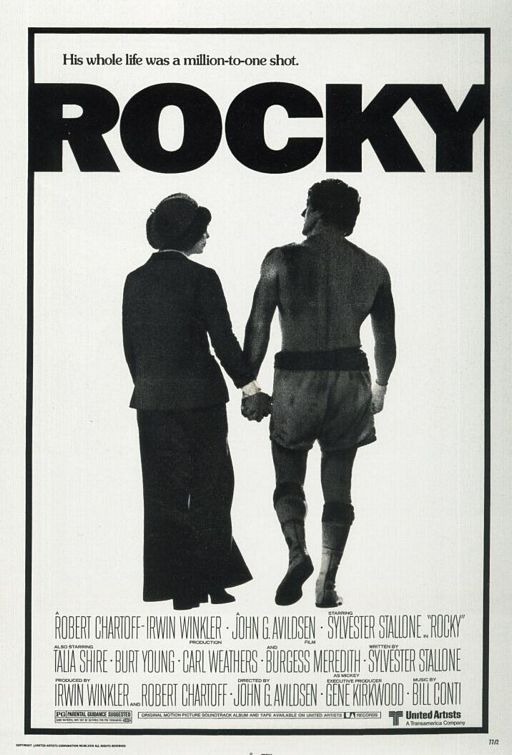 "Rocky" is a 1976 written by and starring and directed by . It tells the story of Rocky Balboa, an uneducated but good-hearted for a in . Balboa is also a club fighter who gets a shot at the when the scheduled contender breaks his hand. Also starring in "Rocky" are as Adrian, as Adrian's brother Paulie, as Rocky's trainer , and as the champion, .

The studio liked the script, and viewed it as a possible vehicle for a well-established star such as , , or . Stallone held out, demanding he be given a chance to star in the film. He later said that he would never have forgiven himself if the film became a success with someone else in the lead. He also knew that producers and 's contract with the studio enabled them to "greenlight" a project if the budget was kept low enough.

Certain elements of the story were altered during filming. The original script had a darker tone: Mickey was portrayed as racist and the script ended with Rocky throwing the fight after realizing he did not want to be part of the world after all.

Although Winkler and Chartoff were enthusiastic about the script, they were at first somewhat hesitant to allow Stallone to play the main character. The producers also had trouble casting other major characters in the story, with Adrian and Apollo Creed cast unusually late by production standards (both were ultimately cast on the same day). Real-life boxer was initially sought for the role of , but he pulled out and the role was ultimately given to . Interestingly, Norton had had three fights with , upon whom Creed was loosely based. According to "The Rocky Scrapbook", was originally chosen to play Adrian, but a money dispute forced the producers to look elsewhere. auditioned for the role but was deemed too pretty for the character. After 's ensuing audition, Chartoff and Winkler, along with Avildsen, insisted that she play the part.Fact|date=April 2007

's was used to accomplish a smooth shot running alongside Rocky during his training run up the flight of stairs. It was also used for some of the shots in the fight scenes and can be openly seen at the ringside during some wide shots of the final fight. ("Rocky" is often erroneously cited as the first film to use the Steadicam, although the distinction actually goes to "Bound for Glory" as the first production to use it. "Marathon Man" also has a claim, as it premiered prior to either film. [cite web| url=http://lserv2.dtopinc.com/tiffen/staging_html/tiffen_news_Steadicam30th_Anniv.html| title= Steadicam 30th anniversary press release] )

The poster seen above the ring before Rocky fights Apollo Creed shows Rocky wearing red shorts with a white stripe when he actually wears white shorts with a red stripe. When Rocky points this out he is told that "it doesn't really matter does it?". This was an actual mistake made by the props department that they could not afford to rectify, so Stallone wrote the brief scene to ensure the audience didn't see it as a goof. The same situation arose with Rocky's robe. When it came back from the costume department, it was far too baggy for Stallone, so rather than ignore this and risk the audience laughing at it, Stallone wrote the dialogue where Rocky himself points out the robe is too big.

is introduced as a small-time boxer and collector for a . The World Heavyweight Championship bout is scheduled for , 1976, the year of the . When the opponent of undefeated is injured, Creed comes up with the idea of fighting a local underdog and, because he likes Rocky's nickname, "The Italian Stallion," he selects the unknown fighter. He says "Apollo Creed versus 'The Italian Stallion.' Sounds like a damn monster movie."

To prepare for the fight, Rocky trains with 1920s-era ex- fighter , while Rocky's best friend, Paulie, a meat-packing plant worker, lets him practice his punches on the carcasses hanging in the freezers. During training, Rocky dates Paulie's quiet sister, Adrian. The night before the fight, Rocky confides in Adrian that he does not expect to beat Creed, and that all he wants is to go the distance with Creed, meaning that lasting 15 rounds (the typical scheduled length of championship fights at the time) against him would mean he "... wasn't just another bum from the neighborhood."

Creed does not initially take the fight seriously, but Rocky unexpectedly knocks him down in the first round and the match turns intense. The fight indeed lasts 15 rounds with each fighter suffering many injuries. After the fight, Rocky calls out for Adrian, who runs down to the ring. As Creed is announced the winner by , Adrian and Rocky embrace while they profess their love to one another, not caring about the results of the fight.

* as Rocky Balboa, an enforcer for a loan shark by day and a semi-pro boxer by night. He is given the chance at the heavyweight title.
* as , Rocky's love interest. Adrian is a quiet pet store clerk who falls in love with Rocky and supports him through his training.
* as , Adrian's brother. A meat-packing plant worker by trade, Paulie permits Rocky to train in the freezer.
* as , Rocky's opponent and heavyweight champion. The character was influenced by the outspoken, real-life boxing great .

With the character of outspoken Apollo Creed influenced by , one interesting detail is the cameo appearance of , another real-life former world champion who fought Ali three times. During the ceremony, Ali and Stallone staged a brief comic confrontation to show Ali was not offended by the film.

Due to the film's low budget, members of Stallone's family played minor roles. His father rings the bell to signal the start and end of a round, his brother Frank plays a street corner singer, and his first wife, Sasha, was the set .Fact|date=April 2007 Other cameos include Los Angeles television playing himself, alongside radio and TV broadcaster Bill Baldwin and , founder of the longest-running independent film company , appearing as a drunk. Longtime Detroit Channel 7 anchor Diana Lewis has a small scene as a TV news reporter. appeared as Apollo Creed's trainer, , a role he would reprise in the entire "Rocky" series, though he is not given an official name until "Rocky II". Brad Leahy played a hot dog vendor.

In 2006, "Rocky" was selected for preservation in the United States by the as being "culturally, historically, or aesthetically significant".

The awarded "Rocky" its annual award for best film of the year in 1976, and in 2006, Sylvester Stallone's original screenplay for "Rocky" was selected for the as the 78th best screenplay of all time.

The original "Rocky" was the most profitable entry of the series, with a budget of US$1.2 million.

Sylvester Stallone was inspired to create the film by the famous fight between and . Wepner had been TKO'd in the 15th round by Ali, but nobody ever expected him to last as long as he did. Wepner recalls in early January 2000, "Sly (Stallone) called me about two weeks after the Ali fight and told me he was gonna make the movie."

The famous scene of Rocky running up the steps of the has become a cultural icon. In 1982 a statue of Rocky, commissioned by Stallone for "", was placed at the top of the . City Commerce Director claimed that Stallone and Rocky had done more for the city's image than "anyone since ."

Differing opinions of the statue and its placement led to a relocation to the sidewalk outside the Arena, although the statue was temporarily returned to the top of the steps in 1990 for "", and again in 2006 for the 30th anniversary of the original "Rocky" movie (although this time it was placed at the bottom of the steps). Later that year, it was permanently moved to a spot next to the steps.

The scene is frequently parodied in the media. In the "Simpsons" episode "", runs up a flight of stairs wearing a tracksuit similar to the one worn by Rocky. [cite web|accessdaymonth = 25 September |accessyear 2006|url = http://www.tv.com/the-simpsons/im-spelling-as-fast-as-i-can/episode/181997/trivia.html|title = I'm Spelling as Fast as I Can @ TV.com] In the movie "", Zohan's nemesis, Phantom, goes through a parodied training sequence finishing with him running up a desert dune and raising his hands in victory.

During the torch relay, Philadelphia native was chosen to run up the museum steps. In 2004, Presidential candidate ended his pre-convention campaign at the foot of the steps before going to Boston to accept his party's nomination for President. [citeweb|title= Philly.com| url=http://www.philly.com/mld/inquirer/9258078.htm|accessdate= 16 November|accessyear= 2006]

Other films and media

To date "Rocky" has generated five sequels. The first, "" (1979) sees Rocky reluctantly called back for a rematch with Apollo Creed. "Rocky II" reunited the entire cast of the original "Rocky", and was just as successful, grossing $200 million worldwide. [ [http://www.imdb.com/title/tt0079817/business Business Data for Rocky II] at the ] A new character appears in 1982's "", (played by ), an outspoken young fighter insisting on a fight with Rocky. Rocky loses this bout, with Mickey suffering a fatal heart attack before the fight (he dies thinking Rocky won, Rocky doesn't have the heart to tell him otherwise.) Rocky accepts an offer from his rival-turned-friend Apollo Creed for help in regaining the title. "" (1985) introduces (), a strong Soviet fighter who is convinced he can defeat any American fighter. A retired Apollo takes up the challenge and is killed in the ring by Drago. After Apollo's death, Rocky decides to fight against Drago, despite his wife Adrian urging him not to, and travels to the Soviet Union to train for the fight. Rocky defeats Drago but has to give up his official heavyweight title as the boxing commission did not sanction the fight. Released in 1990, was a departure from the rest of the series, as Rocky no longer fights professionally, due to brain injuries, but instead trains younger fighters, including (played by real life boxer ). It becomes apparent that Gunn is merely using Rocky's fame for his own ends, and the film ends with Rocky defeating Gunn in a fight in the street. The movie also is the first to introduce Rocky's son, Robert, as a major character. The final addition to the "Rocky" series, [citeweb|title= Official Rocky Balboa Movie Blog|url= http://rockybalboablog.blogspot.com/|accessdate = 15 November|accessyear= 2006|date= November 10, 2006] "Rocky Balboa" , released in 2006, has the 60 year old Rocky fighting against a real-life boxer again, in this case former light heavyweight champion playing Mason "The Line" Dixon. Rocky Balboa was the most critically well received Rocky film of the entire series since the original, 30 years earlier.