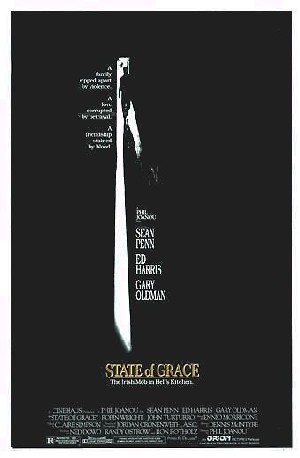 The motion picture, shot on location in , tells of a small group of operating in the section of , west of , known as Hell's Kitchen. When their territory is threatened by , the boss, Frankie Flannery tries to arrange an alliance with the Italian Mafia, their long-time rivals. The film was inspired by the real mob gang known as "."

Jackie () and Frankie Flannery () welcome Terry Noonan () back to the and into their organization after a long absence. Unbeknownst to the gang, however, during his time away Terry has become a in . He's been brought back to New York specifically to go undercover in his old neighborhood and bring down the Irish gangsters before they strike a deal with the Italian mafia.

"State of Grace" was well received by most critics. [ [http://www.rottentomatoes.com/m/state_of_grace/ "State of Grace"] at . Last accessed: , 2007.] , film critic for "," wrote, "Mr. Joanou attempts to capture the sense of place that defines urban crime, and the ethnic and territorial distinctions that give it shape. He is successful much of the time here." Maslin was appreciative of the acting in the film, and wrote, "Jackie Flannery is played by the phenomenal , who since "" has taken on a string of new accents and dramatic identities with stunning ease," and "Jackie's icy older brother, who is played by with an eeriness to match Mr. Oldman's." [ [http://movies2.nytimes.com/gst/movies/movie.html?v_id=46708 Maslin, Janet] . "The New York Times," film review, , .]

Film critic Vincent Leo lauded the work of actor , and wrote, "While Oldman gets the accolades for his energetic performance, it is really Penn's inner demons that provides the film with the right amount of conflict, always letting us be aware that fine lines are the difference between life and death, as well as right and wrong, out in the streets of New York. Is Penn doing the noble thing by taking down the criminals, or is he a rat bastard, disowning himself from the way of life and people who helped him along the way? It's the question that makes him sick to the pit of his stomach, and Penn shows it in his face with almost every scene." [ [http://www.qwipster.net/stateofgrace.htm Leo, Vincent] . "Qwipster," film review.]

The "" film critic , was also impressed, and wrote, "Gary Oldman's performance in the movie is the best thing about it...Oldman's character is more pure. He acts only on the basis of his instincts and prejudices, or out of vengeance and fear." [ [http://rogerebert.suntimes.com/apps/pbcs.dll/article?AID=/19900914/REVIEWS/9140302/1023 Ebert, Roger] . The "," film review, . Last accessed: .]

The review aggregator reported that 86% of critics gave the film a positive review, based on fourteen reviews." [ [http://www.rottentomatoes.com/m/state_of_grace/ "State of Grace"] at . Last accessed: , .]

The producers used the following tagline when marketing the film::The Irish Mob in New York.

The film was released in a limited basis on , . The box office receipts the first week were $179,927 (14 screens). [ [http://www.boxofficemojo.com/movies/?id=stateofgrace.htm Box Office Mojo] box office data.]

believes the difficulty "State of Grace" had at the box office was due to another film with the same theme being released the same year, namely, 's" ". [Ebert, Roger. Ibid.] Other gangster films released in Hollywood during the year include: "" and the "."

The original music soundtrack was released on , by MCA.

The has eighteen tracks, is 52:29 in length, and features the original score composed for the film scored by .

Other songs in film In the scene where Jackie introduces his girlfriend to Terry, the song "Trip Through Your Wires" by the band can be heard playing in the background. This song and the song "Exit," both are cuts from "" () album and are also played in the trailer for the film. Director previously directed U2's live concert documentary "" (1988) and, later, their music video for the single "One" (1992). ' "" plays in a bar scene.

The word "" and its derivatives are used approximately 210 times in the film, which averages out to 1.5 times every minute.