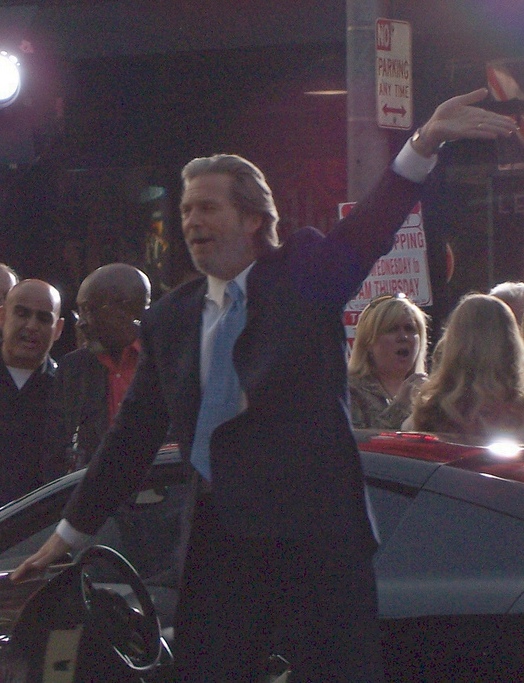 Bridges was born in Los Angeles, , the son of Dorothy Dean (née Simpson) and actor . [ [http://www.filmreference.com/film/31/Jeff-Bridges.html Jeff Bridges Biography (1949-) ] ] He shared a close relationship with his brother, actor , who acted as a surrogate father during his earlier life when their real father was busy with work. [ [http://www.craveonline.com/filmtv/articles/04648313/jeff_bridges_is_still_the_dude.html Jeff Bridges is still the Dude] ] He is an uncle of . He married Susan Geston on , after meeting her on the set of "Rancho Deluxe" in 1975, filmed on a ranch where Geston worked as a maid.

Bridges's first major role was in the 1971 movie "" for which he garnered a nomination for the . He was nominated again for the same award for his performance opposite in the 1974 film "". One of his better known roles was in the 1982 "Tron", in which he played Kevin Flynn, a video . He was nominated for the in 1984 for playing the alien in "Starman". He was also acclaimed for his roles in the thriller "" and the crime drama "Jagged Edge". His role in "Fearless" is recognized by some critics to be one of his best performances. One critic dubbed it a masterpiece; [ [http://www.globalideasbank.org/befaft/B&A-4.HTML Fearless - A movie masterpiece about transcendence ] ] wrote that he 'may be the most natural and least self-conscious screen actor that has ever lived'. [ [http://observer.guardian.co.uk/review/story/0,,1837991,00.html Here's looking back at you | Features | guardian.co.uk Film ] ] He also appeared as "The Dude" in the ' classic cult film ".

In 2000, Bridges was nominated for his fourth for his role in "The Contender". He also starred in the 2005 movie "Tideland", his second with the director (the first being 1991's "The Fisher King"). He plays the role of Obadiah Stane/Iron Monger in the 2008 Marvel motion picture, "Iron Man". [ [http://ironmanmovie.marvel.com/ Ironman - Official Site ] ] In July 2008 he was shown in the Comic Con teaser for TR2N, the upcoming sequel to Tron; leading fans to assume he would once again reprise the role of Flynn from the 1982 classic film.

In his off time while on set, he has been known to document the filmmaking process by photographing fellow actors and on-set staff with a panoramic camera. He began doing this during the filming of "Starman" at the suggestion of co-star . He has published many of these photographs online and in print titled "Pictures". [Hardcover, 2003, ISBN 1-57687-177-0; control number: 2003046711] [ [http://catalog.loc.gov Library of Congress Online Catalogs ] ] [ [http://www.filemagazine.org/galleries/pictures/pictures.html pictures ] ] [ [http://fabulousbakers.tripod.com/ab/bakerboys/albums.html Jeff Bridges Photography ] ] [ [http://www.amazon.com/dp/1576871770/ Amazon.com: Pictures by Jeff Bridges: Jeff Bridges,Peter Bogdanovich: Books ] ]

Bridges is also a cartoonist. Some of his "doodles" have appeared in various films, such as "" and "" (a short story-within-story by ).

Bridges narrated the documentary "" (2002), a singular filmographic witness of the "unmaking" of a retelling of , tentatively titled "", which would have starred as and as the quixotic hero. Bridges has worked with Gilliam on "The Fisher King" and "Tideland". Bridges also narrated the documentaries "Lewis & Clark: Great Journey West" (2002, ), "Raising the Mammoth" (2000, TV), and "The Heroes of Rock and Roll" (1979, TV). He also voiced the character Big Z in the animated picture "Surf's Up".

Bridges has performed voice-over work as well: he was behind Hyundai's 2007 "Think about it" ad campaign, and has done all of the ads in the "Trusted Everywhere" campaign (2006-current).

In the film The Contender, in which he co-starred, he recorded a version of Johnny Cash's standard that played over the beginning of the film. As of 2008, the song has not been released commercially outside of the film.