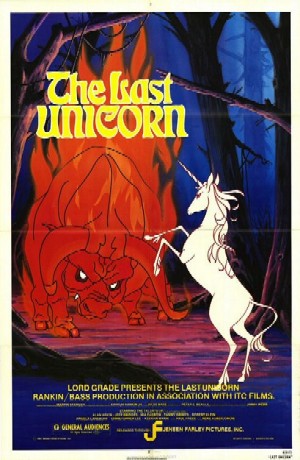 "The Last Unicorn" is a 1982 film, based on the novel written by , and adapted by him for the screenplay. The film is an animated movie produced by for and animated by . The film is noted as "one of the most emotionally frank, sophisticated and mature G-rated cartoons ever made." [ [http://filmsite.org/scenes23.html Famous Scenes, "Filmsite.org", Tim Dirks] ]

In an enchanted forest, a () realizes that she is the last of her kind and decides she must embark on a quest to learn what has become of the other unicorns. The Unicorn discovers from the addled dialogue of a butterfly () that the Red Bull has herded all of her kind to the ends of the earth. Venturing into unfamiliar territory beyond the safety of her forest home, she begins a journey to find them and bring them back.

Along the way she is captured for a time by the Mommy Fortuna (), and is put on display in the cages of the witch's Midnight Carnival. She escapes with the help of an incompetent magician in Fortuna's employ, Schmendrick (), and later gains a second traveling companion, Molly Grue (), the care-worn lover of Captain Cully () of Greenwood Forest.

When the Unicorn nears the seaside castle of King Haggard (), supposed keeper of the Red Bull, she comes face to face with the Bull (which turns out to be a monstrous fire elemental) and learns she cannot defeat him. At the last moment before her final surrender and capture, Schmendrick's unpredictable magic transforms her into a mortal woman. In this human guise, the Red Bull is uninterested in her and departs.

Schmendrick, Molly Grue, and the Unicorn (now in human form) proceed to Haggard's castle and seek entry. King Haggard is at first unwelcoming, and Schmendrick introduces the Unicorn only as Lady Amalthea. Schmendrick requests that the three of them stay there as members of Haggard's court, only to be told that all of the royal complement has long since been dispatched: the only remaining occupants in the castle are Haggard, his adopted son Prince Lir (), and four ancient men-at-arms. Haggard consents to lodging the trio, replacing his more competent on-call wizard with Schmendrick, and setting Molly Grue to work in his scullery.

Becoming gradually forgetful of her original identity and the purpose of her quest, Amalthea feels more human with each passing day, and eventually falls in love with Prince Lir. Caught in a complex web of newfound emotions, she struggles with thoughts of abandoning her quest for the sake of mortal love. Haggard confronts Amalthea in private conversation, hinting at the location of the unicorns, yet from the waning magic in the woman's eyes, he has doubts regarding his previous suspicions that she is more than she seems.

Going through a secret passage in a broken clock in the castle basement, Schmendrick, Molly, Lir, and Amalthea confront the Red Bull in his lair. The fiery creature is no longer deceived by the woman's false human form and chases after her. In an attempt to assist her escape, Schmendrick reverses the transformation spell, turning Amalthea back into the Unicorn, but she is unwilling to leave Lir's side. The Bull drives her toward the ocean, just as he earlier drove all the other unicorns, but Lir comes between them and is killed. Grieving, the Unicorn aggressively turns on the Bull and forces him into the sea. Carried on the white surf of incoming tides, the other unicorns emerge en masse from the water, causing Haggard's castle to collapse into the sea as they rush past, with Haggard falling to his death (screaming his last words: "I "knew" you were the last!") from the crumbling castle parapet. On the beach, the Unicorn magically restores Lir to life before she, too, departs for her forest.

Schmendrick assures Lir, now the king, that he has gained much by winning the love of a unicorn, even if he is now alone. The Unicorn briefly returns to say goodbye to Schmendrick, who laments that he has done her wrong by burdening her with regret and the taint of mortality, but she thanks him nonetheless for having helped to restore unicorns to the world, and though she is the only unicorn to feel regret, she is also the only unicorn to know love.

While provided the film's dialogue and story based on Beagle's work, the animation was the studio Topcraft. The studio was later hired by to work on "", and their core members eventually went on to form .

The film's music was composed and arranged by , with songs performed by the group America. The title track plays while the scenes from the Unicorn Tapestries form a backdrop for the opening credits. The title song has been covered many times, including by on his "Return to Pooh Corner" album, and by the German group "In-Mood". There has also been a remix album, "The Last Unicorn 2005", which contains of an assortment of "club" remixes of the title song by European DJs Da Sylver and DeeFour.

In its DVD releases, the animated version has enjoyed considerable success with a cross-generational mix of old and new fans, selling more than one million units in the U.S., Germany, the UK, France, Australia, and New Zealand between 2003 and 2006. In Germany, the movie has come to be aired yearly on German television as a special, which explains why the German DVD is issued in a Christmas present themed slipcover.

The first U.S. DVD, released in April 2004, was made from poor-quality masters and the video and audio both suffer. That release was also pan-and-scan, and not the film's original widescreen ratio of 1.85:1. In addition, at least some copies were from a manufacturing run in which two instances where characters say "damn" have been muted. (This was done to appease the store buyers at Wal-Mart and other mass distribution outlets, some of whom had received complaints from parents.) Due to these factors, many fans have preferred to buy the digitally remastered German DVD import.

A "25th Anniversary Edition" was released in the U.S. on February 6, 2007, produced using the same digitally-restored masters used for the German edition. It has audio and visual quality superior to the original U.S. release, and is in 16:9 widescreen format. The new DVD edition includes a featurette with an interview with the author ("The Tail of the Last Unicorn"), as well as a set-top game ("Escape from the Red Bull"), photo gallery ("Schmendrick's Magical Gallery"), and the original theatrical trailer.

Some film purists have criticized the 25th Anniversary DVD release over the continued censorship of language (several "damn"s have been muted) and the fact that it runs at 4% faster speed than the original release (thanks to the fact that the DVD was made from German standard masters, which have a different frame rate than American video). Others have stated that the anamorphic widescreen transfer and improved sound and picture quality are worth these changes.

Conlan Press is offering the special edition DVD for sale. Due to ongoing contractual disputes, none of the proceeds of DVD purchases through other sources will reach Peter S. Beagle (though this may change if the dispute is resolved). However, because of the special agreement Conlan Press made with Lionsgate Entertainment, more than half of the payment for copies purchased through Conlan Press will go to Beagle. In addition to the standard version of the DVD, Conlan Press offers the option of purchasing individually personalized autographed copies. [cite press release | title =Fans help world-famous author Peter S. Beagle when they get the new 25th Anniversary DVD Edition of The Last Unicorn through Conlan Press | publisher = | date = | url =http://www.peterbeagle.com/film/lastunicorn/TheLastUnicorn_DVDPressRelease.pdf | accessdate = 2007-09-04 |format=PDF]

In , discovered that Granada International, successor to in terms of control and ownership of the animated feature version, had sold at least 900,000 DVDs and videotapes of "The Last Unicorn" worldwide without paying him his contractual share of the income. When negotiations with Granada over this issue failed to yield any results, a public campaign for support was launched on Peter's behalf by Conlan Press. That campaign is still ongoing, and fans from 50 countries have so far signed up to help make sure that he is paid what he is contractually owed for the film from these sales, other distribution, and merchandising.

Conlan Press's website stated as of June 12, 2006 that an unnamed "eminent third party" was engaging in negotiations with Granada to see that Beagle received fair compensation. In December of 2006 Conlan Press indicated that the negotiations are still continuing in what appears to be a positive direction, and that they hope there will be definitive news soon.

In the Unicorn's search for answers from the Butterfly, he paraphrases 33:17: "His firstling bull has majesty, and his horns are the horns of a wild ox.With them he shall push the unicorns, all of them, to the ends of the ." (RSV) In the King James version, this verse is rendered: "His glory is like the firstling of his bullock, and his horns are like the horns of unicorns: with them he shall push the people together to the ends of the ."

When Schmendrick frees the unicorn from her cage at Mommy Fortuna's camp, Rukh says: "Okay, Schmendrick, I give up. Why is a raven like a writing desk?" This riddle is a reference to Lewis Carroll's novel . Alice is asked the same question when attending the mad tea party.

One of the opening scenes of the film closely copies a tapestry from . The animals are all briefly animated, and then freeze in the pose found on the tapestry. The original may be viewed in branch of the in .

Amalthea is the name of a Greek goddess; Schmendrick may have chosen the name as a sly reference to the one-horned goat that was often misrepresented as a unicorn.

A is a term for a fool, which is the popular perception of the namesake character.