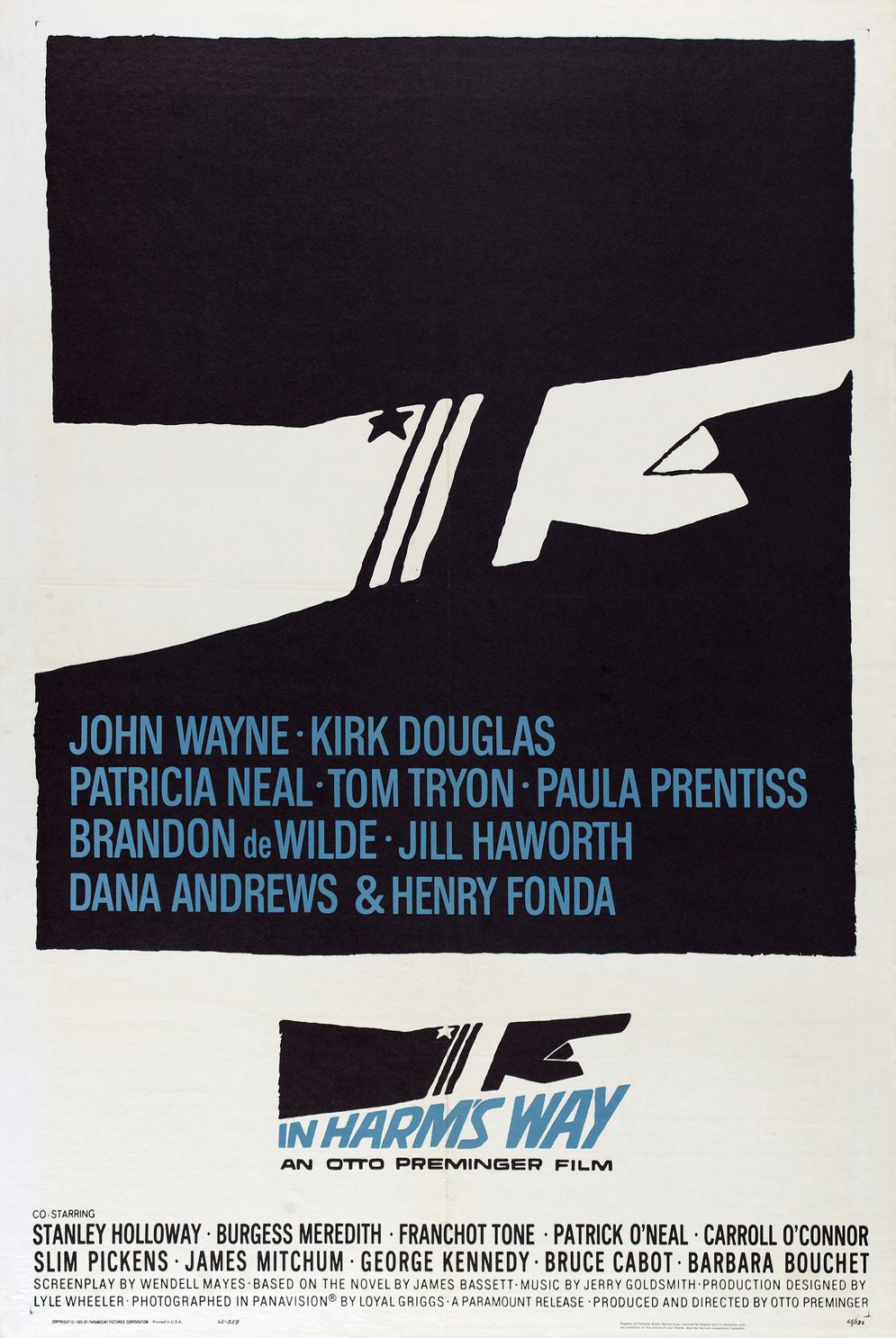 "In Harm's Way" is a 1965 epic starring , , , , , , , , and , produced and directed by , and distributed by . The screenplay was written by based on the novel by . The movie dramatically recounts the lives of several naval officers, their wives or their love interests while based out of as the US involvement in begins. The title of the film is taken from a quote from American Revolutionary naval hero : "I wish to have no connection with any ship that does not sail fast, for I intend to go in harm's way."

stars as U.S. Navy Rockwell "Rock" Torrey, a divorced "second generation Navy" son of a and an Annapolis graduate career officer, who is removed from command of his cruiser for "throwing away the book" when pursuing the enemy and then being torpedoed by a Japanese submarine shortly after the Japanese attack on . After several months of desk duty ashore and recuperation from a broken arm he suffered in the attack on his cruiser, he is promoted to and given a crucial mission requiring the same sort of guts and gallantry. Though it makes use of the same heroic persona that Wayne displayed in his Westerns, this persona is very much restrained under Otto Preminger's direction. We learn more of the character's human qualities: his estrangement from his son, an in the (played by ), and his romance with a Navy Nurse Corps (played by ), which brings out his yearning for a stable emotional anchor in his life. The Wayne/Neal relationship forms the emotional crux of the movie, and the two stars give sensitive performances.

There are sub-plots involving characters played by and , who offer differing portraits of two other career naval officers associated with Wayne's command. Douglas portrays , later , Paul Eddington, a wayward sort of career officer who has resigned as a and returned to the Surface Navy because of an unhappy marriage. Tryon portrays , later and William "Mack" McConnell, a conventional type of young officer only a few years removed from the Naval Academy, with a characteristic Navy wife (played by ) who is ever solicitous and faithful.

The film presents an unglorified and realistic picture of the American Navy and its officers, and its sprawling narrative is typical of Preminger's works in which he examined institutions and the people who run them (such as the American Congress and the Presidency in "", the Catholic Church in "" and the British Intelligence Service in "").

Many believe Wayne's underplayed performance was due to the fact that he was seriously ill with when the film was made. Shortly after filming ended in August he was diagnosed with the disease, and a month later underwent surgery to remove his entire left lung and two ribs. Co-star was soon to develop and died of the disease in September 1968.

The film was shot in by , who composed his scenes in the scope format often using deep focus (Griggs was nominated for a Best Cinematographer Academy Award for his work). 's musical score is also notable, as is the work of in the credit titles sequence (this sequence actually comes at the very end of the film, an interesting departure from the norm in a major Hollywood production at the time).

The film received extensive cooperation from the US Navy. This included the use of the USS|Saint Paul|CA-73|6 in the role of the "straw bottom cruiser" referred to only as the "old swayback" and an accompanying destroyer, USS|Philip|DD-498, that took on the role USS "Cassiday". Other US Navy ships that participated include destroyers USS|Braine|DD-630|6, USS|O'Bannon|DD-450|6, USS "Philip", USS|Renshaw|DD-499|6, USS|Walker|DD-517|6, submarine USS|Capitaine|SS-336|6 and USS|Renville|APA-227|6. The climactic battle with the ese fleet was staged mostly with model ships. Kirk Douglas thought the special effects poor and complained bitterly to both the director and the studio and offered to restage the scenes at his own expense using the special effects people who worked with him on .Fact|date=February 2008

*Nominated for the 1965 for Cinematography (Black-and-White) [http://awardsdatabase.oscars.org/ampas_awards/DisplayMain.jsp?curTime=1166642311582]