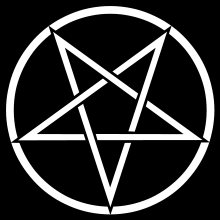 The downward-pointing pentagram is often used to represent Satanism.

Satanism is a group of religions that is composed of a diverse number of ideological and philosophical beliefs and social phenomena. Their shared feature include symbolic association with, admiration for the character of, and even veneration of Satan or similar rebellious, promethean, and liberating figures. Generally, those Satanists who believe in the Judeo-Christian concept of Satan are linked into the belief system of today's Judeo-Christian religions, as they believe in the same theology presented in the Bible.

Satan, also called Lucifer by many Christians, first appears in the Books of Chronicles provoking David to take a census of Israel. In the Book of Job he is called "the Satan" (meaning "the opposer")[1] and acted as the prosecutor in God's court. A character named "Satan" was described as the tempter of Jesus in many of the Gospels of early Christians.

Christianity and Islam typically regard Satan as the adversary or enemy, but extensive popular redactions and recompositions of biblical tales have inserted his presence and influence into every aspect of adversarial role back to the Creation and Fall. By Christians and Muslims especially, the figure of Satan was treated variously as a rebellious or jealous competitor to human beings, to Jesus, and characterized as a fallen angel or demon ruling the penitential Underworld, chained in a deep pit, wandering the planet vying for souls or providing the impetus for all worldly travesty. 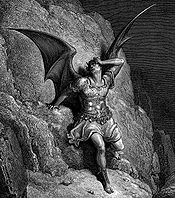 Satan in Paradise Lost, as illustrated by Gustave Doré

Particularly after the European Enlightenment, some works, such as Paradise Lost, were taken up by Romantics and described as presenting the biblical Satan as an allegory representing a crisis of faith, individualism, free will, wisdom and enlightenment. Those works actually featuring Satan as a heroic character are fewer in number, but do exist; George Bernard Shaw, William Blake, and Mark Twain (Letters from the Earth) included such characterizations in their works long before religious Satanists took up the pen.

Although the public practice of Satanism began in 1966 with the founding of the Church of Satan, some historical precedents exist: a group called the Ophite Cultus Satanas was founded in Ohio by Herbert Arthur Sloane in 1948. Inspired by Gnosticism and Gerald Gardner's Wicca, the coven venerated Satan as both a horned god and ophite messiah.

Inverted cross, often seen as a symbol of Satanism.

A particular antique Norwegian grimoire,[2] in contrast to other Christian-oriented magical texts which describe Satan as an inferior spirit to be enslaved, contains a spell wherein the magician is instructed to renounce God and the Holy Spirit, and "completely swear to Lucifer, ruler of the Dark Abyss". The text itself claims to be originally from a manuscript in Wittenberg, similar to the many occult chapbooks pseudonymously ascribed to Doctor Faustus.

There was also a late 17th century French moral panic against alleged satanism during the Poison Affair (1675–1682), which occurred during the reign of Louis XIV and dealt with accusations of widespread poisonings, infanticide and forgery, presided over by an alleged satanic social network, which had no actual substance but reflected the aforementioned pre-Enlightenment popular religious anxieties.[3]

Despite heavy criticism from other religious groups, there are signs that Satanistic beliefs have become more socially tolerated. Satanism is now allowed in the Royal Navy of the British Armed Forces, despite much opposition from Christians,[5][6] [7] and, in 2005, the Supreme Court of the United States debated over protecting the religious rights of prison inmates after a lawsuit challenging the issue was filed to them.[8][9] The number of practitioners of Satanism has also been found to be on the rise in Poland[10] during recent years, despite Poland's long reputation as Europe's most devoutly Catholic country.[11]

Historically, some people or groups have been specifically described as worshiping Satan or the Devil, or of being devoted to the work of Satan. The widespread preponderance of these groups in European cultures is in part connected with the importance and meaning of Satan within Christianity.

The Yazidis, a minority religion of the Middle East who worship Melek Taus, are often referred to as Satan worshipers by some Islamic sectors.[22]

Atheistic or Deistic Satanism is generally the same as Ethical egoism, in that the highest good is acting in one's own interest. Satanism has essentially been called "Egoism with ritual".

LaVeyan Satanism is a religion founded in 1966 by Anton Szandor LaVey. Its teachings are based on individualism, self-indulgence, and "eye for an eye" morality. Unlike Theistic Satanists, LaVeyan Satanists are atheists, agnostics and apatheists who regard Satan as a symbol of man's inherent nature.[23] According to religioustolerance.org, LaVeyan Satanism is a "small religious group that is unrelated to any other faith, and whose members feel free to satisfy their urges responsibly, exhibit kindness to their friends, and attack their enemies".[24] Its beliefs were first detailed in The Satanic Bible and it is overseen by the Church of Satan.

Symbolic Satanism[25][26] is the observance and practice of Satanic philosophies, customs and rituals.[27] In this interpretation of Satanism, the Satanist does not worship Satan in the theistic sense, but is an adversary to all spiritual creeds and religions. 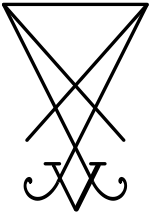 Part of the seal of Lucifer from the Grimorium Verum, used as a symbol of Satan by some Satanists
Main article: Theistic Satanism

Theistic Satanism (also known as Traditional Satanism, Spiritual Satanism or Devil Worship) is a form of Satanism with the primary belief that Satan is an actual deity or force to revere or worship.[28][29] Other characteristics of Theistic Satanism may include a belief in magic, which is manipulated through ritual, although that is not a defining criterion, and theistic Satanists may focus solely on devotion. Unlike the LaVeyan Satanism founded by Anton LaVey in the 1960s, Theistic Satanism is theistic as opposed to atheistic, believing that Satan is a real being rather than a symbol of individualism.

Luciferianism can be understood best as a belief system or intellectual creed that venerates the essential and inherent characteristics that are affixed and commonly given to Lucifer. Luciferianism is often identified as an auxiliary creed or movement of Satanism, due to the common identification of Lucifer with Satan. Some Luciferians accept this identification and/or consider Lucifer as the "light bearer" and illuminated aspect of Satan, giving them the name of Satanists and the right to bear the title. Others reject it, giving the argument that Lucifer is a more positive and easy-going ideal than Satan. They are inspired by the ancient myths of Egypt, Rome and Greece, Gnosticism and traditional Western occultism.

Palladists are an alleged Theistic Satanist society or member of that society. The name Palladian comes from Pallas and refers to wisdom and learning. It is of no relation to the palladian style of Andrea Palladio.

Our Lady of Endor Coven

Our Lady of Endor Coven, also known as Ophite Cultus Satanas (originally spelled "Sathanas"), was a satanic cult founded in 1948 by Herbert Arthur Sloane in Toledo, Ohio. The group was heavily influenced by gnosticism (especially that found in the contemporary book by Hans Jonas, The Gnostic Religion), and worshiped Satanas, their name for Satan (Cultus Satanas is a Latin version of Cult of Satan). Satanas (or Satan) was defined in gnostic terms as the Serpent in the Garden of Eden who revealed the knowledge of the true God to Eve. That it called itself "Ophite" is a reference to the ancient gnostic sect of the Ophites, who were said to worship the serpent.

Adolescents use satanic symbols like the inverted pentagram, the trappings of the black mass, or demonic imagery to provide the impression of satanism.[30] This is a liminal experience, reserved primarily for shock value, and does not necessarily imply actual interest, or even belief, in the rites, symbolism, and philosophies of the various forms of Satanist religious practice cited above.[31]

Black metal music has often been connected with Satanism, in part to the lyrical content of several bands and their frequent use of imagery often tied to left hand path beliefs (such as the inverted pentagram). More often than not, such musicians say they do not believe in legitimate Satanic ideology and often profess to being atheists, agnostics, or religious skeptics. In some instances, followers of right hand path religions use Satanic references for entertainment purposes and shock value.[32]

Glen Benton, vocalist and bassist of the band Deicide, once openly claimed to be a practitioner of Theistic Satanism, and has spoken publicly on numerous occasions to profess staunch anti-Christian sentiment. Mercyful Fate singer King Diamond has also openly admitted to practicing Satanism, which is widely and explicitly present in the album Don't Break The Oath. The late and controversial Dissection frontman Jon Nödtveidt, spoke about his "chaos-gnostic" satanic beliefs, being a member of the Misanthropic Luciferian Order, and claimed his band and music being sonic (satanic) propaganda devices. Norwegian black metal artists such as Euronymous from Mayhem and Infernus from Gorgoroth have also identified themselves as Satanists and actively promoted their beliefs.[33] Numerous church burnings that covered parts of Norway in the early 1990s were also attributed to youths involved in the black metal movement, which included people claiming to have theistic Satanic beliefs and strong "anti-LaVeyan" attitudes.[34] However, the legitimacy of such actions as Satanic endeavors, rather than simply rebellious actions done for publicity, is something that has been doubted by even those who contribute to the genre.[35]

The Church of Satan

The Church of Satan is an organization dedicated to the acceptance of the carnal self, as articulated in The Satanic Bible, written in 1969 by Anton Szandor LaVey.

On Walpurgisnacht, April 30, 1966, Anton LaVey founded the "The Satanic Church" (which he would later rename "Church of Satan"). After his death in 1997 the Church of Satan was taken over by a new administration and its headquarters was moved to New York. LaVey's daughter, the High Priestess Karla LaVey, felt this to be a disservice to her father's legacy. The First Satanic Church was re-founded on October 31, 1999 by Karla LaVey to carry on the legacy of her father. She continues to run it out of San Francisco, California.

The Temple of Set is an initiatory occult society claiming to be the world's leading left-hand path religious organization. It was established in 1975 by Michael A. Aquino and certain members of the priesthood of the Church of Satan,[36] who left because of administrative and philosophical disagreements. The philosophy of the Temple of Set may be summed up as "enlightened individualism" — enhancement and improvement of oneself by personal education, experiment and initiation. This process is necessarily different and distinctive for each individual.

Setianism, in theory, is similar to theistic Satanism. The principle deity of Setianism is the ancient Egyptian god Set, or Seth, the god of adversary. Set supposedly is the Dark Lord behind the Hebrew entity Satan. Set, as the first principle of consciousness, is emulated by Setians, who symbolize the concept of individual, subjective intelligence distinct from the natural order as the "Black Flame."

Some people who are not members of the Temple of Set find spiritual inspiration in the Egyptian god Set, and may share some beliefs with the organization. The belief system in general is referred to as Setianism.

The Order of Nine Angles (ONA) is a purported secretive Satanist organization mentioned in books that detail fascist Satanism. They were initially formed in the United Kingdom and rose to public note during the 1980s and 1990s. Presently, the ONA is organized around clandestine cells (which it calls traditional nexions)[37] and around what it calls sinister tribes.[38][39]