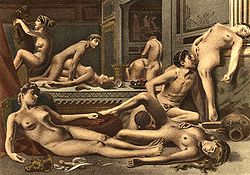 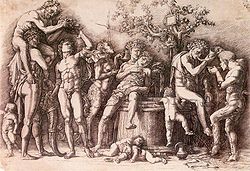 In ancient Greek religion, orgia (ὄργια, sing. ὄργιον, orgion) were secret nighttime cultic congregations of the Greek mystery religions, overseen by an orgiophant (a teacher or revealer of secret rites) popularly thought to involve sex,[1] which were celebrated with dancing, drunkenness, singing, etc. They were practiced in the worship of Demeter at Eleusis (mentioned in the Homeric Hymn) or in the worship of Dionysus (Herodotus 2.81), the Cabeiri, Demeter Achaia (Herodotus 2.51, 5.61), Orpheus, Eumolpus, or Cybele.

The ancient Romans adopted the Greek orgia practices for the Bacchanalia festivals, which were wild and mystic festivals of the Greco-Roman god Bacchus (or Dionysus), the wine god. At first the secret rites were restricted to women, but eventually men were also permitted.