Charles-Marie-Georges Huysmans (pronounced [ʃaʁl maʁi ʒɔʁʒ ɥismɑ̃s]) (February 5, 1848 – May 12, 1907) was a French novelist who published his works as Joris-Karl Huysmans ([ʒoʁis kaʁl]). He is most famous for the novel À rebours (Against the Grain or Against Nature). His work is remarkable for its idiosyncratic use of the French language, extensive vocabulary, detailed and sensuous descriptions, and biting, satirical wit. It also displays an encyclopaedic erudition, ranging from the catalogue of decadent Latin authors in À rebours to the discussion of the iconography of Christian architecture in La cathédrale. Huysmans expresses a disgust with modern life and a deep pessimism, which led him first to the philosophy of Arthur Schopenhauer[1], then back to the Catholicism in which he had been raised.

He was born in Paris to a Dutch father, Godfried Huysmans, who was a lithographer by trade. His mother, Malvina Badin, had been a schoolmistress. He published his works as "Joris-Karl Huysmans", using an approximation of the Dutch equivalent of his forenames, to emphasize his roots. Huysmans' father died when he was eight years old and his mother quickly remarried, leading Huysmans to feel resentful against his stepfather, Jules Og, a Protestant who was part-owner of a Parisian book-bindery.

Huysmans was unhappy at school but gained a baccalauréat. For thirty-two years, he worked as a civil servant for the French Ministry of the Interior, a job he found insufferably tedious. The young Huysmans was called up to fight in the Franco-Prussian War, but was invalided out with dysentery, an experience he described in his early story Sac au dos (Backpack) (later included in Les Soirées de Médan).

His first major publication was a collection of prose poems, heavily influenced by Baudelaire, called Le drageoir aux épices (1874). They attracted little attention but already revealed flashes of the author's distinctive style. Huysmans followed it with Marthe, Histoire d'une fille (1876). The story of a young prostitute, it was much closer to Naturalism and brought him to the attention of Emile Zola. His next works were similar: sombre, realistic and filled with detailed evocations of Paris, a city Huysmans knew intimately. Les Soeurs Vatard, dedicated to Zola, deals with the lives of women in a bookbindery. En ménage is an account of a writer's failed marriage (Huysmans himself never married, but had a long-term lover called Anna Meunier). The climax of his early work is the novella À vau-l'eau (Downstream or With the Flow), the story of a downtrodden clerk, Monsieur Folantin, and his futile quest for a decent meal.

This was followed by Huysmans' most famous novel À rebours (Against the Grain or Against Nature or Wrong Way) (1884), which featured a single character, the aesthete des Esseintes, and decisively broke from Naturalism, becoming the ultimate example of "decadent" literature. The description of des Esseintes' "alluring liaison" with a cherry-lipped youth influenced other writers of the decadent movement, including Oscar Wilde, and is considered an important step in the formation of "gay literature".[2] À rebours won further notoriety as an exhibit in the trials of Oscar Wilde in 1895, during which the prosecutor referred to the novel as a "sodomitical" book. The book also appalled Zola, who felt it had dealt a "terrible blow" to Naturalism. Huysmans began to drift away from the Naturalists and found new friends among the Symbolist and Catholic writers whose work he had praised in À rebours, including Jules Barbey d'Aurevilly, Villiers de L'Isle Adam and Léon Bloy. Stéphane Mallarmé was so pleased with the publicity his verse had received from the novel that he dedicated one of his most famous (and most obscure) poems, "Prose pour des Esseintes", to its hero. Barbey d'Aurevilly told Huysmans that after writing À rebours he would have to choose between "the muzzle of a pistol and the foot of the Cross", and Huysmans, who had received a secular education and abandoned his religion in childhood, did indeed return to the Catholic Church eight years later.[3] 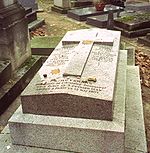 Huysmans' next novel, En rade, a highly unromantic account of a summer spent in the country, did not sell as well as its predecessor. In 1891, Là-Bas attracted considerable attention for its depiction of Satanism in the late 1880s. The book introduced the character Durtal, a thinly disguised self-portrait. The later Durtal novels, En route (1895), La cathédrale (1898) and L'oblat (1903), record Durtal/Huysmans' conversion to Roman Catholicism. En route depicts Durtal's spiritual struggle during his stay at a Trappist monastery. In La cathédrale the protagonist is at Chartres, making an intense study of the cathedral and its symbolism. In L'Oblat, Durtal becomes a Benedictine oblate and finally learns to accept the world's suffering. After his retirement from the Ministry in 1898, Huysmans planned to leave Paris and move to Ligugé, where he hoped to set up a community of Catholic artists, including Charles-Marie Dulac (1862-1898), a young painter he had praised in La cathédrale. However, the project was never realized as Dulac died a few months before Huysmans completed his arrangements for the move to Ligugé.

Huysmans was also known for his art criticism in L'Art moderne (1883) and Certains (1889) and as a founding member of the Académie Goncourt. He was also an early advocate of Impressionism and an admirer of such artists as Gustave Moreau and Odilon Redon.

Huysmans was made a Chevalier de la Légion d'honneur in 1892, but only for his work with the civil service. In 1905, his admirers persuaded the French government to promote him to Officier de la Légion d'honneur for his literary achievements. In the same year, Huysmans was diagnosed with cancer of the mouth. Joris-Karl Huysmans died in 1907 and was interred in the Cimetière de Montparnasse, Paris.

Barbaric in its profusion, violent in its emphasis, wearying in its splendor, it is - especially in regard to things seen - extraordinarily expressive, with all the shades of a painter's palette. Elaborately and deliberately perverse, it is in its very perversity that Huysmans' work - so fascinating, so repellent, so instinctively artificial - comes to represent, as the work of no other writer can be said to do, the main tendencies, the chief results, of the Decadent movement in literature. (Arthur Symons, "The Decadent Movement in Literature")

...Continually dragging Mother Image by the hair or the feet down the worm-eaten staircase of terrified Syntax. (Léon Bloy, quoted in Robert Baldick, The Life of J.-K. Huysmans)

It is difficult to find a writer whose vocabulary is so extensive, so constantly surprising, so sharp and yet so exquisitely gamey in flavour, so constantly lucky in its chance finds and in its very inventiveness. (Julien Gracq) 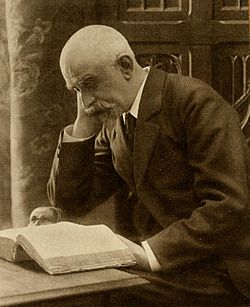