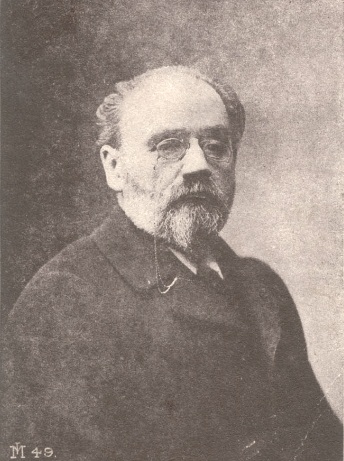 Émile François Zola (IPA-fr|emil zɔˈla) (2 April 1840 &ndash; 29 September 1902) was an influential French , the most important exemplar of the literary school of naturalism, and a major figure in the political liberalization of France and in the exoneration of the falsely accused and convicted army officer .

Émile Zola was born in in 1840. His father, François Zola, was the son of an Italian engineer with a French wife, and his mother was Émilie Aubert. The family moved to , in the southeast, when he was three years old. Four years later, in 1847, his father died, leaving his mother on a meagre pension. In 1858, the Zolas moved to Paris, where Émile became friends with the painter and started to write in the romantic style. Zola's widowed mother had planned a law career for him, but he failed his examination.

Before his breakthrough as a writer, Zola worked as a clerk in a shipping firm, and then in the sales department for a publisher (Hachette). He also wrote literary and art reviews for newspapers. As a political journalist, Zola did not hide his dislike of , who had successfully run for the office of President under the constitution of the , only to misuse this position as a springboard for the that made him emperor.

After his first major novel, "" (1867), Zola started the long series called Les Rougon Macquart, about a family under the Second Empire.

More than half of Zola's novels were part of this set of 20 collectively known as . Unlike Balzac who in the midst of his literary career resynthesized his work into "", Zola from the outset at the age of 28 had thought of the complete layout of the series. Set in France's Second Empire, the series traces the "environmental" influences of violence, , and which became more prevalent during the second wave of the industrial revolution. The series examines two branches of a single family: the respectable (that is, legitimate) Rougons and the disreputable (illegitimate) Macquarts, for five generations.

As he described his plans for the series, "I want to portray, at the outset of a century of liberty and truth, a family that cannot restrain itself in its rush to possess all the good things that progress is making available and is derailed by its own momentum, the fatal convulsions that accompany the birth of a new world."

Although Zola and Cézanne were friends from childhood and in youth, they broke in later life over Zola's fictionalized depiction of Cézanne and the Bohemian life of painters in his novel "" ("The Masterpiece", 1886).

From 1877 onwards with the publication of "", Émile Zola became wealthy–he was better paid than , for example. He became a figurehead among the literary bourgeoisie and organized cultural dinners with , and other writers at his luxurious villa in Medan near Paris after 1880. "Germinal" in 1885, then the three 'cities', "Lourdes" in 1894, "Rome" in 1896 and "Paris" in 1897, established Zola as a successful author.

The self-proclaimed leader of French naturalism, Zola's works inspired operas such as those of , notably "Louise" in the 1890s. His works, inspired by the concepts of (), social and idealistic , resonate with those of Nadar, Manet and subsequently Flaubert.

Activism on behalf of Captain Dreyfus

Émile Zola risked his career and even his life on 13 January 1898, when his "J'accuse", [ [http://fr.wikisource.org/wiki/J%27accuse J'accuse letter] at French editorials during the Dreyfus Affair. As Zola was a leading French thinker, his letter formed a major turning-point in the affair.

Zola was brought to trial for criminal libel on 9 June 1899, and was convicted on 23 February, sentenced, and removed from the Legion of Honor. Rather than go to jail, Zola fled to . Without even having had the time to pack a few clothes, he arrived at Victoria Station on 19 July. After his brief and unhappy residence in , from October 1898 to June 1899, he was allowed to return in time to see the government fall.

The government offered Dreyfus a pardon (rather than exoneration), which he could accept and go free and so effectively admit that he was guilty, or face a re-trial in which he was sure to be convicted again. Although he was clearly not guilty, he chose to accept the pardon. Zola said, "The truth is on the march, and nothing shall stop it." In 1906, Dreyfus was completely exonerated by the Supreme Court.

The 1898 article by Émile Zola is widely marked in France as the most prominent manifestation of the new power of the (writers, artists, academicians) in shaping , the media and the State. The power of intellectuals lasted well into the 1980s, with a peak in the 1960s with and .Fact|date=May 2008

Zola died in of caused by a stopped chimney. He was 62 years old. His enemies were blamed, but nothing was proven. (Decades later, a Parisian roofer claimed on his deathbed to have closed the chimney for political reasons). [cite book | title=Zola, A Life | date=1995 | last=Brown | first=Frederick ] Zola was initially buried in the in , but on 4 June 1908, almost six years after his death, his remains were moved to the Panthéon, where he shares a crypt with .

The biographical film "" won the Academy Award for Best Picture in 1937. The film focuses mainly on Zola's involvement in the Dreyfus Affair.

In January 1998, President held a memorial to honor the centenary of "J'accuse".

*"And let us never forget the courage of a great writer who, taking every risk, putting his tranquility, his fame, even his life in peril, dared to pick up his pen and place his talent in the service of truth." &mdash;
*"The artist is nothing without gift, but the gift is nothing without work." - Émile Zola
*"If you ask me what I came to do in this world, I, an artist, I will answer you: I am here to live out loud." - Émile Zola [cite web|url=http://thinkexist.com/quotation/if_you_ask_me_what_i_came_to_do_in_this_world-i/173215.html|title=Emile Zola quotes|accessdate=2008-08-26]
*"Zola descends into the sewer to bathe in it, I to cleanse it." &mdash;
*"Civilization will not attain perfection until the last stone from the last church falls on the last priest." &mdash; Émile Zola
*"...but I affirm, with intense conviction, the Truth is on the march and nothing will stop it." &mdash; Émile Zola
*"The action I am taking is no more than a radical measure to hasten the explosion of truth and justice. I have but one passion: to enlighten those who have been kept in the dark, in the name of humanity which has suffered so much and is entitled to happiness. My fiery protest is simply the cry of my very soul. Let them dare, then, to bring me before a court of law and let the enquiry take place in broad daylight!" — Émile Zola, "J'accuse!" (1898)