Nana is a novel by the French naturalist author Émile Zola. Completed in 1880, Nana is the ninth installment in the 20-volume Les Rougon-Macquart series, the object of which was to tell "The Natural and Social History of a Family under the Second Empire", the subtitle of the series.

A year before he started to write Nana, Zola did not know anything yet about the Variétés. It was Ludovic Halévy who invited him to see an operetta with him on February 15, 1878, and took him backstage. Halévy told him innumerable stories about the amorous life of the star — Anna Judic, whose ménage à trois would become the model for Rose Mignon, her husband, and Fauchery — and also about famous cocottes such as Blanche d'Antigny, Anna Deslions, Delphine de Lizy, and Hortense Schneider, an amalgam of which was to serve the writer as the basis for his principal character.

Nana tells the story of Nana Coupeau's rise from streetwalker to high-class cocotte during the last three years of the French Second Empire. Nana first appears in the end of L'Assommoir (1877), another of Zola's Rougon-Macquart series, in which she is portrayed as the daughter of an abusive drunk; in the end, she is living in the streets and just beginning a life of prostitution.

The new novel opens with a night at the Théâtre des Variétés. The Exposition Universelle (1867) has just opened its doors. Nana is 15 years old (the number 18 mentioned in the book is not more than a fig leaf). Zola had taken care to make this clear to his readers by publishing an elaborate family tree of the Rougon-Macquarts in the newspaper Le Bien Public in 1878 when he started writing Nana. Zola describes in detail the performance of La blonde Vénus, a fictional operetta modelled after Offenbach's La belle Hélène, in which Nana is cast as the lead. She has never been seen on a stage, but tout Paris is talking about her. When asked to say something about her talents, Bordenave, the manager of the theatre (he calls it the brothel), explains that a star doesn't have to know how to sing or act: Nana has something else, dammit, and something that takes the place of everything else. I scented it out, and it smells damnably strong in her, or else I lost my sense of smell. Just as the crowd is about to dismiss her performance as terrible, young Georges Hugon shouts: "Très chic!" From then on, she owns the audience, and, when she appears only thinly veiled in the third act, Zola writes: All of a sudden, in the good-natured child the woman stood revealed, a disturbing woman with all the impulsive madness of her sex, opening the gates of the unknown world of desire. Nana was still smiling, but with the deadly smile of a man-eater.

The novel then goes on to show how Nana destroys every man who pursues her: Philippe Hugon, Georges' brother, imprisoned after stealing from the army, his employer, for Nana; Steiner, a wealthy banker who is ruined after hemorrhaging cash for Nana's decadence; Georges Hugon, who was so captivated with her from the beginning that, when he realized he could not have her, stabs himself with scissors in anguish; Vandeuvres, a wealthy owner of horses who burns himself in his barn after Nana ruins him financially; Fauchery, a journalist and publisher who falls for Nana early on, writes a scathing article about her later, and falls for her again and is ruined financially; and Count Muffat, whose faithfulness to Nana brings him back for humiliation after humiliation until he finds her in bed with his elderly father-in-law. Becker explains: "What emerges from [Nana] is the completeness of Nana's destructive force, brought to a culmination in the thirteenth chapter by a kind of roll call of the victims of her voracity" (118).

When Nana's work is done, Zola has her die a horrible death from smallpox: What lay on the pillow was a charnel house, a heap of pus and blood, a shovelful of putrid flesh. The pustules had invaded the whole face, so that one pock touched the next. While outside her window the crowd is madly chanting To Berlin! To Berlin! (the time is July 1870, after the Ems Dispatch), Venus is decomposing, her moral corruption is now physical. And this is, Zola implies, what is about to happen to the Second Empire. 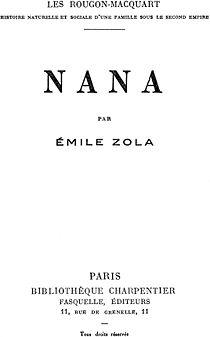 The novel was an immediate success. Le Voltaire, the French newspaper that was to publish it in instalments from October 1879 on, had launched a gigantic advertising campaign, raising the curiosity of the reading public to a fever pitch. When Charpentier finally published Nana in book form in February 1880, the first edition of 55,000 copies was sold out in one day. Flaubert and Edmond de Goncourt were full of praise for Nana. On the other hand, a part of the non-reading public, spurred on by some critics, reacted to the book with outrage. While the novel is held up as a fine example of writing, it is not especially true to Zola's touted naturalist philosophy; instead, it is one of the most symbolically complex of his novels, setting it apart from the earthy "realism" of L'Assommoir or the more brutal "realism" of La Terre (1887). However, it was a great deal more authentic than most contemporary novels about the demimonde.

Nana is especially noted for the crowd scenes, of which there are many, in which Zola proves himself a master of capturing the incredible variety of people. Whereas in his other novels—notably Germinal (1885) -- he gives the reader an amazingly complete picture of surroundings and the lives of characters, from the first scene we are to understand that this novel treads new ground.

Flaubert summed up the novel in one perfect sentence: