Fallen angel
This article is about the view of fallen angels in Christianity. For other uses, see Fallen angel (disambiguation). 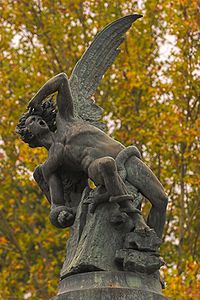 Fallen angel is a concept developed in Jewish mythology from interpretation of the Book of Enoch.[1] The actual term fallen angel is not found in either the Hebrew Bible[2] or the New Testament. Christians adopted the concept of fallen angels[1] mainly based on their interpretations of the Book of Revelation Chapter 12.[2] Fallen angels are identified with the Watchers,[3] as well as the angels who are cast down to the earth from the War in Heaven, and ha-satan.[2]

The mention of the "sons of God" in Genesis 6:2 ("The sons of God saw that the daughters of man were attractive. And they took as their wives any they chose") has sometimes been interpreted, both in Judaism and in Christianity, as a reference to fallen angels.

The pre-Christian apocryphal Book of Enoch recounts that a group of 200 rebellious angels, or Watchers, left heaven and came down to Earth to marry human women and have children with them.[4]

In the New Testament, Revelation 12:3-4 refers to the dragon’s tail that drew a third part of the stars of heaven. In verses 7-9, The Dragon and his angels battle against Michael the Archangel in a War in Heaven. Losing the battle, they are “cast out” of heaven to the earth. Thus, amongst Christians, fallen angels have been associated with the term “cast out”.[2][5]

From the 5th Century CE, literature develops about Lucifer (Latin for Morning Star), a name frequently attributed to the Devil in Christian belief. This usage stems from a particular interpretation of Isaiah 14:3-20, by Origen and others,[8] Some see the passage as using this name to describe the king of Babylon, who had exalted himself as being deity himself, after which God would cast him down. Similar terminology is used in Ezekiel to describe the king of Tyre. The Greek word used in the Septuagint of Isaiah 14;12 is Ἑωσφόρος (Heosphoros, "dawn-bearer"),[9][10][11] not φωσφόρος, the etymological synonym of Latin lucifer,[12][13] used in 2 Peter 1:19 of the morning star, which is mentioned also elsewhere in the Bible with no reference to Satan.

The Catechism of the Catholic Church speaks of "the fall of the angels" not in spatial terms but as a radical and irrevocable rejection of God and his reign by some angels who, though created as good beings, freely chose evil, their sin being unforgivable because of the irrevocable character of their choice, not because of any defect in the infinite divine mercy.[14]

19th-century Universalists such as Thomas Allin (1891)[15] claimed that Clement of Alexandria, Origen and Gregory of Nyssa taught that even the Devil and fallen angels will eventually be saved.[16]

The Unitarian Joseph Priestley suggested that the passages refer to Korah.[17] William Graham (1772) suggested that it referred to the spies in Canaan.[18] These passages are generally held today to be commentary, either positive or neutral or negative, on Jewish traditions concerning Enoch circulating in the Early Church.[19]

The Quran mentions angels (malak ملاك) around ninety times, usually in the plural and referring to obedient angels.

Harut and Marut (Arabic: هاروت وماروت‎) are two angels sent to test the people of Babylon. That there are fallen angels is not in the Quran and the Qur'an explicitly states angels have no free will, but are like appendages of Allah.[22][23]

In literature, John Milton's Paradise Lost (7.131-134, etc.), refers to Satan as being "brighter once amidst the host of Angels, than the sun amidst the stars."[24]