Silicon nitride is a chemical compound of silicon and nitrogen. If powdered silicon is heated between 1300° and 1400°C in an atmosphere of nitrogen, trisilicon tetranitride, Si3N4, is formed. The silicon sample weight increases progressively due to the chemical combination of silicon and nitrogen. Without an iron catalyst, the reaction is complete after several hours (~7), when no further weight increase due to nitrogen absorption (per gram of silicon) is detected. In addition to Si3N4, several other silicon nitride phases (with chemical formulas corresponding to varying degrees of nitridation/Si oxidation state) have been reported in the literature, for example, the gaseous disilicon mononitride (Si2N); silicon mononitride (SiN), and silicon sesquinitride (Si2N3), each of which are stoichiometric phases. As with other refractories, the products obtained in these high-temperature syntheses depends on the reaction conditions (e.g. time, temperature, and starting materials including the reactants and container materials), as well as the mode of purification. However, the existence of the sesquinitride has since come into question[2]

The first reported preparation was in 1857 by Henri Etienne Sainte-Claire Deville and Friedrich Wöhler.[4] In their method, silicon was heated in a crucible placed inside another crucible packed with carbon to reduce permeation of oxygen to the inner crucible. They reported a product they termed silicon nitride but without specifying its chemical composition. Paul Schuetzenberger first reported a product with the composition of the tetranitride, Si3N4, in 1879 that was obtained by heating silicon with brasque (a paste made by mixing charcoal, coal, or coke with clay which is then used to line crucibles) in a blast furnace. In 1910, Ludwig Weiss and Theodor Engelhardt heated silicon under pure nitrogen to produce Si3N4. E. Friederich and L. Sittig made Si3N4 in 1925 via carbothermal reduction under nitrogen, that is, by heating silica, carbon, and nitrogen at 1250°-1300°C.

Silicon nitride remained merely a chemical curiosity for decades before it was used in commercial applications. From 1948 to 1952, the Carborundum Company, Niagara Falls, New York, applied for several patents on the manufacture and application of silicon nitride.[5] By 1958 Haynes (Union Carbide) silicon nitride was in commercial production for thermocouple tubes, rocket nozzles, and boats and crucibles for melting metals. British work on silicon nitride, started in 1953, was aimed at high-temperature parts of gas turbines and resulted in the development of reaction-bonded silicon nitride and hot-pressed silicon nitride. In 1971, the Advanced Research Project Agency of the US Department of Defense placed a US$17 million contract with Ford and Westinghouse for two ceramic gas turbines.[6]

Even though the properties of silicon nitride were well known, its natural occurrence was discovered only in the 1990s, as tiny inclusions (about 2×0.5 microns in size) in meteorites. The mineral was named nierite after a pioneer of mass spectrometry Alfred O. C. Nier.[7] This mineral might have been detected earlier, again exclusively in meteorites, by Soviet geologists.[8]

Silicon nitride can be obtained by direct reaction between silicon and nitrogen at temperatures between 1300 and 1400 °C:[5]

The lattice constants of silicon nitride and silicon are different. Therefore tension or stress can occur, depending on the deposition process. Especially when using PECVD technology this tension can be reduced by adjusting deposition parameters.[11]

Silicon nitride nanowires can also be produced by sol-gel method using carbothermal reduction followed by nitridation of silica gel, which contains ultrafine carbon particles. The particles can be produced by decomposition of dextrose in the temperature range 1200–1350 °C. The possible synthesis reactions are:[12]

Silicon nitride is difficult to produce as a bulk material—it cannot be heated over 1850 °C, which is well below its melting point, due to dissociation to silicon and nitrogen. Therefore, application of conventional hot press sintering techniques is problematic. Bonding of silicon nitride powders can be achieved at lower temperatures through adding additional materials (sintering aids or "binders") which commonly induce a degree of liquid phase sintering.[13] A cleaner alternative is to use spark plasma sintering where heating is conducted very rapidly (seconds) by passing pulses of electric current through the compacted powder. Dense silicon nitride compacts have been obtained by this techniques at temperatures 1500–1700 °C.[14][15]

There exist three crystallographic structures of silicon nitride (Si3N4), designated as α, β and γ phases.[16] The α and β phases are the most common forms of Si3N4, and can be produced under normal pressure condition. The γ phase can only be synthesized under high pressures and temperatures and has a hardness of 35 GPa.[17][18]

The α- and β-Si3N4 have trigonal (Pearson symbol hP28, space group P31c, No. 159) and hexagonal (hP14, P63, No. 173) structures, respectively, which are built up by corner-sharing SiN4 tetrahedra. They can be regarded as consisting of layers of silicon and nitrogen atoms in the sequence ABAB... or ABCDABCD... in β-Si3N4 and α-Si3N4, respectively. The AB layer is the same in the α and β phases, and the CD layer in the α phase is related to AB by a c-glide plane. The Si3N4 tetrahedra in β-Si3N4 are interconnected in such a way that tunnels are formed, running parallel with the c axis of the unit cell. Due to the c-glide plane that relates AB to CD, the α structure contains cavities instead of tunnels. The cubic γ-Si3N4 is often designated as c modification in the literature, in analogy with the cubic modification of boron nitride (c-BN). It has a spinel-type structure in which two silicon atoms each coordinate six nitrogen atoms octahedrally, and one silicon atom coordinates four nitrogen atoms tetrahedrally.[15]

The longer stacking sequence results in the α-phase having higher hardness than the β-phase. However, the α-phase is chemically unstable compared with the β-phase. At high temperatures when a liquid phase is present, the α-phase always transforms into the β-phase. Therefore, β-Si3N4 is the major form used in Si3N4 ceramics.[19]

In general, the main issue with applications of silicon nitride has not been technical performance, but cost. As the cost has come down, the number of production applications is accelerating.[20]

One of the major applications of sintered silicon nitride is in automobile industry as a material for engine parts. Those include, in Diesel engines, glowplugs for faster start-up; precombustion chambers (swirl chambers) for lower emissions, faster start-up and lower noise; turbocharger for reduced engine lag and emissions. In spark-ignition engines, silicon nitride is used for rocker arm pads for lower wear, turbocharger for lower inertia and less engine lag, and in exhaust gas control valves for increased acceleration. As examples of production levels, there is an estimated more than 300,000 sintered silicon nitride turbochargers made annually.[5][13][20] 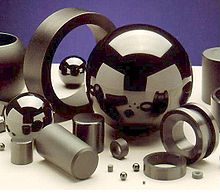 Si3N4 was first demonstrated as a superior bearing in 1972 but did not reach production until nearly 1990 because of challenges associated with reducing the cost. Since 1990, the cost has been reduced substantially as production volume has increased. Although Si3N4 bearings are still 2–5 times more expensive than the best steel bearings, their superior performance and life are justifying rapid adoption. Around 15–20 million Si3N4 bearing balls were produced in the U.S. in 1996 for machine tools and many other applications. Growth is estimated at 40% per year, but could be even higher if ceramic bearings are selected for consumer applications such as in-line skates and computer disk drives.[20]

Silicon nitride has long been used in high-temperature applications. In particular, it was identified as one of the few monolithic ceramic materials capable of surviving the severe thermal shock and thermal gradients generated in hydrogen/oxygen rocket engines. To demonstrate this capability in a complex configuration, NASA scientists used advanced rapid prototyping technology to fabricate a one-inch-diameter, single-piece combustion chamber/nozzle (thruster) component. The thruster was hot-fire tested with hydrogen/oxygen propellant and survived five cycles including a 5-minute cycle to a 1320 °C material temperature.[23]

The first major application of Si3N4 was abrasive and cutting tools. Grinding, milling, and boring of metals constitute the major cost of manufacturing. A study in the early 1970s estimated that there were 2,692,000 metal-cutting machine tools in the United States with an annual operating cost of $64 billion.[20]

Bulk, monolithic silicon nitride is used as a material for cutting tools, due to its hardness, thermal stability, and resistance to wear. It is especially recommended for high speed machining of cast iron. Hot hardness, fracture toughness and thermal shock resistance mean that sintered silicon nitride can cut cast iron, hard steel and nickel based alloys with surface speeds up to 25 times quicker than those obtained with conventional materials such as tungsten carbide.[13] The use of Si3N4 cutting tools has had a dramatic effect on manufacturing output. For example, face milling of gray cast iron with silicon nitride inserts doubled the cutting speed, increased tool life from one part to six parts per edge, and reduced the average cost of inserts by 50%, as compared to traditional tungsten carbide tools.[5][20]

Example of local silicon oxidation through a Si3N4 mask

Silicon nitride is often used as an insulator and chemical barrier in manufacturing integrated circuits, to electrically isolate different structures or as an etch mask in bulk micromachining. As a passivation layer for microchips, it is superior to silicon dioxide, as it is a significantly better diffusion barrier against water molecules and sodium ions, two major sources of corrosion and instability in microelectronics. It is also used as a dielectric between polysilicon layers in capacitors in analog chips.[24]

Silicon nitride deposited by LPCVD contains up to 8% hydrogen. It also experiences strong tensile stress, which may crack films thicker than 200 nm. However, it has higher resistivity and dielectric strength than most insulators commonly available in microfabrication (1016 Ω·cm and 10 MV/cm, respectively).[9]

Not only silicon nitride, but also various ternary compounds of silicon, nitrogen and hydrogen (SiNxHy) are used insulating layers. They are plasma deposited using the following reactions:[9]

These SiNH films have much less tensile stress, but worse electrical properties (resistivity 106 to 1015 Ω·cm, and dielectric strength 1 to 5 MV/cm).[9][25]