Anarcho-naturism (also anarchist naturism and naturist anarchism) appeared in the late 19th century as the union of anarchist and naturist philosophies.[1][2][3][4] Mainly it had importance within individualist anarchist circles[5][6]

Anarcho-naturism advocated vegetarianism, free love, nudism, hiking and an ecological world view within anarchist groups and outside them.[2][8] Anarcho-naturism promoted an ecological worldview, small ecovillages, and most prominently nudism as a way to avoid the artificiality of the industrial mass society of modernity.[2] Naturist individualist anarchists saw the individual in his biological, physical and psychological aspects and tried to eliminate social determinations.[14]

An important early influence on anarchist naturism was the thought of Henry David Thoreau,[9] Leo Tolstoy[2] and Elisee Reclus.[15] 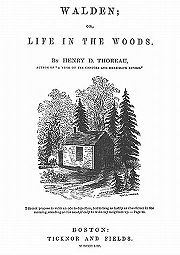 Thoreau was an American author, poet, naturalist, tax resister, development critic, surveyor, historian, philosopher, and leading transcendentalist. He is best known for his book Walden, a reflection upon simple living in natural surroundings, and his essay, Civil Disobedience, an argument for individual resistance to civil government in moral opposition to an unjust state. His thought is an early influence on green anarchism but with an emphasis on the individual experience of the natural world influencing later naturist currents,[9] simple living as a rejection of a materialist lifestyle[9] and self-sufficiency were Thoreau's goals, and the whole project was inspired by transcendentalist philosophy. "Many have seen in Thoreau one of the precursors of ecologism and anarcho-primitivism represented today in John Zerzan. For George Woodcock this attitude can be also motivated by certain idea of resistance to progress and of rejection of the growing materialism which is the nature of American society in the mid 19th century."[14] John Zerzan himself included the text "Excursions" (1863) by Thoreau in his edited compilation of anti-civilization writings called Against civilization: Readings and reflections from 1999.[16]

For the influential French anarchist Élisée Reclus naturism "was at the same time a physical means of revitalization, a report with the body completely different from hypocrisy and taboos which prevailed at the time, a more convivial way to see life in society, and an incentive to a respect of the planet. Thus naturism develops in France, in particular under the influence of Elized Reclus, end XIX century and beginning XX century, among anarchistic communities resulting from utopian socialism."[15]

In France later important propagandists of anarcho-naturism Henri Zisly[17] and Emile Gravelle who collaborated in La Nouvelle Humanité followed by Le Naturien, Le Sauvage, L'Ordre Naturel, & La Vie Naturelle [18] Their ideas were important in individualist anarchist circles in France but also in Spain where Federico Urales (pseudonym of Joan Montseny), promotes the ideas of Gravelle and Zisly in La Revista Blanca (1898–1905).[19] Zisly aimed "at supporting a return to “natural life” through writing and practical involvement, stimulated lively confrontations within and outside the anarchist environment. Zisly vividly criticized progress and civilization, which he regarded as “absurd, ignoble, and filthy.” He openly opposed industrialization, arguing that machines were inherently authoritarian, defended nudism, advocated a non-dogmatic and non-religious adherence to the “laws of nature,” recommended a lifestyle based on limited needs and self-sufficiency, and disagreed with vegetarianism, which he considered “anti-scientific.”"[17]

The influence of naturist views in the wider french anarchist movement could be seen in this way. "In her memoir of her anarchist years that was serialized in Le Matin in 1913, Rirette Maîtrejean made much of the strange food regimens of some of the compagnons...She described the “tragic bandits” of the Bonnot gang as refusing to eat meat or drink wine, preferring plain water. Her humorous comments reflected the practices of the “naturist” wing of individualist anarchists who favored a simpler, more “natural” lifestyle centered on a vegetarian diet. In the 1920s, this wing was expressed by the journal Le Néo-Naturien, Revue des Idées Philosophiques et Naturiennes. Contributors condemned the fashion of smoking cigarettes, especially by young women; a long article of 1927 actually connected cigarette smoking with cancer! Others distinguished between vegetarians, who foreswore the eating of meat, from the stricter “vegetalians,” who ate nothing but vegetables. An anarchist named G. Butaud, who made this distinction, opened a restaurant called the Foyer Végétalien in the nineteenth arrondissement in 1923. Other issues of the journal included vegetarian recipes. In 1925, when the young anarchist and future detective novelist Léo Malet arrived in Paris from Montpellier, he initially lodged with anarchists who operated another vegetarian restaurant that served only vegetables, with neither fish nor eggs. Nutritional concerns coincided with other means of encouraging health bodies, such as nudism and gymnastics. For a while in the 1920s, after they were released from jail for antiwar and birth-control activities, Jeanne and Eugène Humbert retreated to the relative safety of the “integral living” movement that promoted nude sunbathing and physical fitness, which were seen as integral aspects of health in the Greek sense of gymnos, meaning nude. This back-to-nature, primitivist current was not a monopoly of the left; the same interests were echoed by right-wing Germans in the interwar era. In France, however, these proclivities were mostly associated with anarchists, insofar as they suggested an ideal of self-control and the rejection of social taboos and prejudices."[20]

This relationship between anarchism and naturism was quite important at the end of the 1920s in Spain.[21] "The linking role played by the ‘Sol y Vida’ group was very important. The goal of this group was to take trips and enjoy the open air. The Naturist athenaeum, ‘Ecléctico’, in Barcelona, was the base from which the activities of the group were launched. First Etica and then Iniciales, which began in 1929, were the publications of the group, which lasted until the Spanish Civil War. We must be aware that the naturist ideas expressed in them matched the desires that the libertarian youth had of breaking up with the conventions of the bourgeoisie of the time. That is what a young worker explained in a letter to Iniciales. He writes it under the odd pseudonym of ‘silvestre del campo’, (wild man in the country). “I find great pleasure in being naked in the woods, bathed in light and air, two natural elements we cannot do without. By shunning the humble garment of an exploited person, (garments which, in my opinion, are the result of all the laws devised to make our lives bitter), we feel there no others left but just the natural laws. Clothes mean slavery for some and tyranny for others. Only the naked man who rebels against all norms, stands for anarchism, devoid of the prejudices of outfit imposed by our money-oriented society.”"[21]

An influential spanish anarchist during the 1920s and 1930s who was also an important propagandist of anarcho-naturism was Isaac Puente.[22][23] Puente was a militant of both the CNT anarcho-syndicalist trade union and Iberian Anarchist Federation; and wrote the final document for the Extraordinary Confederal Congress of Zaragoza of 1936 which established the main political line for the CNT for that year.[24] In 1933 he published the book El Comunismo Libertario y otras proclamas insurreccionales y naturistas. (en:Libertarian Communism and other insurrectionary and naturist proclaims) which sold around 100.000 copies.[25] Isaac Puente was a doctor who approached his medical practice from a naturist point of view.[22] He approached naturism as an integral solution for the working classes alongside neomalthusianism. He saw that naturism seeked to approach the living being while anarchism seeked to address the social being.[26] He saw that capitalist societies endangered the well being of humans from both a socio-economic point of view as well as a sanitary one and promoted anarcho-communism alongside naturism as a solution.[22]

This ecological tendency in spanish anarchism was strong enough as to call the attention of the CNT–FAI in Spain. So Daniel Guérin in Anarchism: From Theory to Practice reports how "Spanish anarcho-syndicalism had long been concerned to safeguard the autonomy of what it called "affinity groups." There were many adepts of naturism and vegetarianism among its members, especially among the poor peasants of the south. Both these ways of living were considered suitable for the transformation of the human being in preparation for a libertarian society. At the Saragossa congress the members did not forget to consider the fate of groups of naturists and nudists, "unsuited to industrialization." As these groups would be unable to supply all their own needs, the congress anticipated that their delegates to the meetings of the confederation of communes would be able to negotiate special economic agreements with the other agricultural and industrial communes. On the eve of a vast, bloody, social transformation, the CNT did not think it foolish to try to meet the infinitely varied aspirations of individual human beings."[27]

The historian Kirwin R. Schaffer in his study of cuban anarchism reports anarcho-naturism as "A third strand within the island’s anarchist movement" alongside anarcho-communism and anarcho-syndicalism.[13] Naturism was a global alternative health and lifestyle movement. Naturists focused on redefining one’s life to live simply, eat cheap but nutritious vegetarian diets, and raise one’s own food if possible. The countryside was posited as a romantic alternative to urban living, and some naturists even promoted what they saw as the healthful benefits of nudism. Globally, the naturist movement counted anarchists, liberals, and socialists as its followers. However, in Cuba a particular “anarchist” dimension evolved led by people like Adrián del Valle, who spearheaded the Cuban effort to shift naturism’s focus away from only individual health to naturism having a “social emancipatory” function."[13]

Schaffer reports the influence that anarcho-naturism had outside naturists circles. So "For instance, nothing inherently prevented an anarcho-syndicalist in the Havana restaurant workers’ union from supporting the alternative health care programs of the anarcho-naturists and seeing those alternative practices as “revolutionary.”".[13] "Anarcho-naturists promoted a rural ideal, simple living, and being in harmony with Nature as ways to save the laborers from the increasingly industrialized character of Cuba. Besides promoting an early twentieth-century “back-to-the-land” movement, they used these romantic images of Nature to illustrate how far removed a capitalist industrialized Cuba had departed from an anarchist view of natural harmony."[13] The main propagandizer in Cuba of anarcho-naturism was the Catalonia born "Adrián del Valle (aka Palmiro de Lidia)...Over the following decades, Del Valle became a constant presence in not only the anarchist press that proliferated in Cuba but also mainstream literary publications...From 1912 to 1913 he edited the freethinking journal El Audaz. Then he began his largest publishing job by helping to found and edit the monthly alternative health magazine that followed the anarcho-naturist line Pro-Vida.[13]

Naturism also met anarchism in the United Kingdom. "In many of the alternative communities established in Britain in the early 1900's nudism, anarchism, vegetarianism and free love were accepted as part of a politically radical way of life. In the 1920's the inhabitants of the anarchist community at Whiteway, near Stroud in Gloucestershire, shocked the conservative residents of the area with their shameless nudity."[28] In Italy, during the IX Congress of the Italian Anarchist Federation in Carrara in 1965, a group decided to split off from this organization and created the Gruppi di Iniziativa Anarchica. In the seventies, it was mostly composed of "veteran individualist anarchists with an pacifism orientation, naturism, etc,...".[6]

American anarcho-syndicalist Sam Dolgoff shows some of the criticism that some people on the other anarchist currents had for anarcho-naturist tendencies. "Speaking of life at the Stelton Colony of New York in the 1930s, noted with disdain that it, “like other colonies, was infested by vegetarians, naturists, nudists, and other cultists, who sidetracked true anarchist goals.” One resident “always went barefoot, ate raw food, mostly nuts and raisins, and refused to use a tractor, being opposed to machinery, and he didn't want to abuse horses, so he dug the earth himself.” Such self-proclaimed anarchists were in reality “ox-cart anarchists,” Dolgoff said, “who opposed organization and wanted to return to a simpler life.” In an interview with Paul Avrich before his death, Dolgoff also grumbled, “I am sick and tired of these half-assed artists and poets who object to organization and want only to play with their belly buttons.”".[29]