For the collectivization of the means of production, it was originally envisaged that workers will revolt and forcibly collectivize the means of production[1] Once collectivization takes place, money would be abolished to be replaced with labour notes and workers' salaries would be determined in democratic organizations based on job difficulty and the amount of time they contributed to production. These salaries would be used to purchase goods in a communal market.[2] This contrasts with anarcho-communism where wages would be abolished, and where individuals would take freely from a storehouse of goods "to each according to his need." Thus, Bakunin's "Collectivist Anarchism," notwithstanding the title, is seen as a blend of individualism and collectivism.[3]

Collectivist anarchism is most commonly associated with Mikhail Bakunin, the anti-authoritarian sections of the First International, and the early Spanish anarchist movement.

The collectivist anarchists at first used the term "collectivism" to distinguish themselves from the mutualism of the followers of Proudhon and the state socialists associated with Karl Marx. Bakunin wrote, "we shall always protest against anything that may in any way resemble communism or state socialism," which Bakunin regarded as fundamentally authoritarian ("Federalism, Socialism, and Anti-Theologism," 1867).[6] 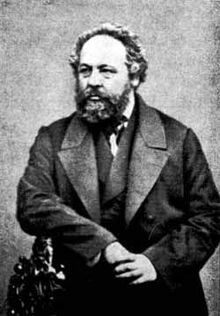 The anti-authoritarian sections of the First International proclaimed at the St. Imier Congress (1872) that "the aspirations of the proletariat can have no purpose other than the establishment of an absolutely free economic organization and federation, founded upon the labour and equality of all and absolutely independent of all political government," in which each worker will have the "right to the enjoyment of the gross product of his labours and thereby the means of developing his full intellectual, material and moral powers in a collective setting." This revolutionary transformation could "only be the outcome of the spontaneous action of the proletariat itself, its trades bodies and the autonomous communes."[7] A similar position was adopted by the Workers' Federation of the Spanish Region in 1882, as articulated by an anarchist veteran of the First International, Jose Llunas Pujols, in his essay, "Collectivism."[7]

By the early 1880s, most of the European anarchist movement had adopted an anarchist communist position, advocating the abolition of wage labour and distribution according to need. Ironically, the "collectivist" label then became more commonly associated with Marxist state socialists who advocated the retention of some sort of wage system during the transition to full communism. The anarchist communist, Peter Kropotkin, attacked this position in his essay, "The Collectivist Wages System", which was reprinted in his book The Conquest of Bread in 1892.

The difference between Collectivist Anarchism and anarcho-communism is that under anarchist collectivism, the means of production were to be socialized, but a wage system was retained based on the amount of labor performed. Anarchist communism also called for the socialization of production but also of the distribution of goods. Instead of 'to each according to his labor', in anarcho-communism the community would supply the subsistence requirements to each member free of charge according to the maxim 'to each according to his needs'.[8]

Collectivist Anarchists are not necessarily opposed to the use of currency, but some while opposing the retaining of money propose the adoption of labour vouchers or "personal credit" (such as Participatory Economists). Originally many collectivist anarchists saw their philosophy as a carryover to communist anarchism, but many today see their system and the use of a labour voucher system as permanent rather than a transition. Collectivist anarchist James Guillaume argued that such a society would "guarantee the mutual use of the tools of production which are the property of each of these groups and which will by a reciprocal contract become the collective property of the whole ... federation. In this way, the federation of groups will be able to ... regulate the rate of production to meet the fluctuating needs of society."[13] They argue for workplace autonomy and self-management "the workers in the various factories have not the slightest intention of handing over their hard-won control of the tools of production to a superior power calling itself the 'corporation.'"[14]

In real life application of the collectivist projects were quite successful,[15] sources during the Spanish Revolution noted that in the Catalan region,