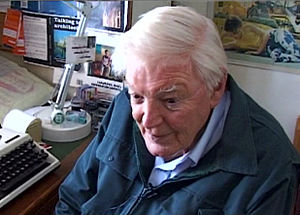 The author in his workroom, October 2003

Colin Ward (Wanstead, 14 August 1924 – Ipswich, 11 February 2010) was a British anarchist writer. He has been called "one of the greatest anarchist thinkers of the past half century, and a pioneering social historian." [1]

Ward was born in Wanstead, Essex. He became an anarchist while in the British Army during World War II. As a subscriber to War Commentary, the war-time equivalent of Freedom, he was called in 1945 from Orkney, where he was serving, to give evidence at the London trial of the editors for publishing an article allegedly intended to seduce soldiers from their duty or allegiance. Ward robustly repudiated any seduction, but the three editors (Philip Sansom, Vernon Richards and John Hewetson) were convicted and sentenced to nine months imprisonment.

From 1952 to 1961, Ward worked as an architect. In 1971, he became the Education Officer for the Town and Country Planning Association. He published widely on education, architecture and town planning. His most influential book was The Child In The City (1978), about children's street culture. From 1995-6, Ward was Centennial Professor of Housing and Social Policy at the London School of Economics.[3]

In 2001, Ward was made an Honorary Doctor of Philosophy at Anglia Ruskin University.[4]

Most of Ward's works deal with the issue of rural housing and the problems of overpopulation and planning regulations in Britain to which he proposed anarchistic solutions. He was a keen admirer of architect Walter Segal who set up a ‘build it yourself’ system in Lewisham meaning that land that was too small or difficult to build on conventionally was given to people who with Segal’s help would build their own homes. Ward was very keen on the idea of ‘build it yourself’ having said in response to the proposition of removing all planning laws, ‘I don't believe in just letting it rip, the rich get away with murder when that happens. But I do want the planning system to be flexible enough to give homeless people a chance’. In his book Cotters and Squatters, Ward described the historical development of informal customs to appropriate land for housing which frequently grew up in opposition to legally constituted systems of land ownership. Ward described folkways in many cultures which parallel the Welsh tradition of the Tŷ unnos or 'one night house' erected on common land.

Ward included a passage from one of his anarchist forebears, Peter Kropotkin, who said of the empty and overgrown landscape of Surrey and Sussex at the end of the 19th century, ‘in every direction I see abandoned cottages and orchards going to ruin, a whole population has disappeared.’ Ward himself went on to observe: ‘Precisely a century after this account was written, the fields were empty again. Fifty years of subsidies had made the owners of arable land millionaires through mechanised cultivation and, with a crisis of over-production; the European Community was rewarding them for growing no crops on part of their land. However, opportunities for the homeless poor were fewer than ever in history. The grown-up children of local families can’t get on the housing ladder’. Wards solution was that ‘there should be some place in every parish where it's possible for people to build their own homes, and they should be allowed to do it a bit at a time, starting in a simple way and improving the structure as they go along. The idea that a house should be completed in one go before you can get planning permission and a mortgage is ridiculous. Look at the houses in this village. Many of them have developed their character over centuries - a bit of medieval at the back, with Tudor and Georgian add-ons.’

Ward’s philosophy aimed at removing authoritarian forms of social organisation and replacing them with self-managed, non-hierarchical forms. This form of federalism was put forward in part by Kropotkin and Proudhon and is based upon the principle that, as Ward put it, ‘in small face-to-face groups, the bureaucratising and hierarchical tendencies inherent in organisations have least opportunity to develop’. He particularly admired the Swiss system of direct democracy and cantons whereby each canton is run by its members who have control on the laws placed upon them.

‘I believe that the social ideas of anarchism: autonomous groups, spontaneous order, workers’ control, the federative principle, add up to a coherent theory of social organisation which is a valid and realistic alternative to the authoritarian, hierarchical and institutional social philosophy which we see in application all around us. Man will be compelled, Kropotkin declared, ‘to find new forms of organisation for the social functions which the State fulfils through the bureaucracy’ and he insisted that ‘as long as this is not done nothing will be done. I think we have discovered what these new forms of organisation should be. We have now to make the opportunities for putting them into practice’.

‘You may think in describing anarchism as a theory of organisation I am propounding a deliberate paradox: ‘anarchy’ you may consider to be, by definition, the opposite of organisation. In fact, however, ‘anarchy’ means the absence of government, the absence of authority. Can there be social organisation without authority, without government? The anarchists claim that there can be, and they also claim that it is desirable that there should be. They claim that, at the basis of our social problems is the principle of government. It is, after all, governments which prepare for war and wage war, even though you are obliged to fight in them and pay for them; the bombs you are worried about are not the bombs which cartoonists attribute to the anarchists, but the bombs which governments have perfected, at your expense. It is, after all, governments which make and enforce the laws which enable the 'haves' to retain control over social assets rather than share them with the 'have-nots'. It is, after all, the principle of authority which ensures that people will work for someone else for the greater part of their lives, not because they enjoy it or have any control over their work, but because they see it as their only means of livelihood.'

‘I said that it is governments which make wars and prepare for wars, but obviously it is not governments alone - the power of a government, even the most absolute dictatorship, depends on the tacit assent of the governed. Why do people consent to be governed? It isn't only fear: what have millions of people to fear from a small group of politicians? It is because they subscribe to the same values as their governors. Rulers and ruled alike believe in the principle of authority, of hierarchy, of power. These are the characteristics of the political principle. The anarchists, who have always distinguished between the state and society, adhere to the social principle, which can be seen wherever men link themselves in an association based on a common need or a common interest. ‘The State’ said the German anarchist Gustav Landauer, ‘is not something which can be destroyed by a revolution, but is a condition, a certain relationship between human beings, a mode of human behaviour; we destroy it by contracting other relationships, by behaving differently.’

‘In my experience there are two kinds of Green people. There are philanthropists (lovers of humankind), who see the revolution in communications and the collapse of the city economy as the opportunity for the greening of the dense Victorian city. And there are the misanthropists (haters of humanity), who want to pull up the drawbridge to exclude those urban hordes from ‘rural’ England, which they quaintly equate with a ‘natural’ environment. They want to keep those beastly city-dwellers in the urban ghetto. The rich, of course, know the advantages of both environments and have a country seat and a pad in town.’