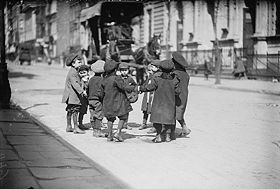 Children's street culture refers to the cumulative culture created by young children. Collectively, this body of knowledge is passed down from one generation of urban children to the next, and can also be passed between different groups of children (e.g. in the form of crazes, but also in intergenerational mixing). It is most common in children between the ages of seven and twelve. It is strongest in urban working class industrial districts where children are traditionally free to "play out" in the streets for long periods without supervision.

Children's street culture is invented and largely sustained by children themselves, although it may come to incorporate fragments of media culture and toys in its activities. It is not to be confused with the commercial media-culture produced for children (e.g., comics, television, mass-produced toys, and clothing), although it may overlap.

Young children's street culture usually takes place on quiet backstreets and sidewalks, and along routes that venture out into local parks, playgrounds, scrub and wasteland, and to local shops. It can often incorporate many found and scavenged materials such as old car seats, tyres, planks, bricks, etc. Sometimes found materials will be combined to create objects (e.g. making guys for Guy Fawkes Night — see Beck 1984). Play will often incorporate crazes (sometimes incorporating seasonal elements that are freely collected, such as conkers, snowballs, sycamore seeds). It also imposes imaginative status on certain sections of the urban realm (local buildings, street objects, road layouts, etc.). In summer children may use scavenged materials to create a temporary and semi-hidden 'den' or 'hideout' or 'HQ' in a marginal area near their homes, that serves as an informal meeting and relaxation place during the summer (see: Sobel, 2001). An urban area that looks faceless or neglected to an adult may have deep 'spirit of place' meanings in children's street culture.

Although it varies from place to place, research shows that it appears to share many commonalities across many cultures. It is a traditional phenomenon that has been closely investigated and documented in the western world during the 20th century by anthropologists and folklorists such as Iona Opie; street photographers such as Roger Mayne, Helen Levitt, David Trainer, Humphrey Spender and Robert Doisneau; urbanists such as Colin Ward and Robin Moore, as well as being described in countless novels of childhood. The research of Robin Moore stresses children's need for 'marginal' unsupervised areas 'within running distance' of homes (scrubby bushes and hedges, disused buildings). There are now two academic journals devoted to this area, the Journal of Children's Geographies and Play & Folklore.

It has occasionally been central to feature films, such as the Our Gang ("Little Rascals") series, Ealing's Hue and Cry (1947) and some Children's Film Foundation films such as Go Kart, Go! and Soap Box Derby.

Since the advent of distractions such as video games, and television, concerns have been expressed about the vitality - or even the survival - of children's street culture.

Many informal groups of small children will develop some level of superstitious beliefs about their local area. For instance:- they will believe that there are certain places that are 'unlucky' to step on (e.g.: certain large cracks in a sidewalk) or touch (e.g.: gateposts of a certain colour), or that an old woman is a 'witch', or that an abandoned house is 'haunted'. But in some extreme circumstances a consistent mythos may emerge among young children, and across a large area. One example dates from 1997, The Miami New Times published Lynda Edwards' report "Myths Over Miami", which describes a huge consistent mythology spreading among young homeless children in the American South. The story has been picked up and reprinted many times on internet blogs and websites. There is no known verification or confirmation that the mythology she describes actually exists, but these "secret stories" are clearly based on known elements of street culture, such as labeling certain places "haunted" or recycling legends of dangerous spirits such as Mary Worth. The article was the basis for Mercedes Lackey's novel Mad Maudlin, co-written with Rosemary Edghill.