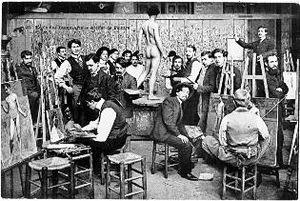 Models are frequently used during art classes, but are also employed by professional artists. The most common types of art created using models are figure drawing, figure painting, sculpture and photography. Although commercial motives dominate over aesthetics in advertising, its 'artwork' commonly employs models.

Throughout the history of Western art, drawing the human figure from living models was considered the most useful way to develop the skill of draftsmanship. In the art school classroom setting, where the purpose is to learn how to draw the human form in all the different shapes, ages and ethnicity, there are no real limitations on who the model can be. In some cases, the model may pose with various props, one or more other models, animals etc., against real or artificial background, in natural or artificial light and so on.

Models for life drawing classes are often nude, apart from visually non-obstructive personal items such as small jewelry and sometimes eyeglasses. This may be referred to as being "undraped" or "disrobed". (Alternatively, a cache-sexe may be worn. Eadward Muybridge's historic scientific studies of the male and female form in motion, for example, has examples of both usages.)

While posing, the model is expected to remain motionless, like a mannequin, except for 'moving poses'. An experienced model will not speak, wriggle, scratch, or readjust during the pose, unless confronted by an artist or instructor who doesn't believe in complete stillness and silence in poses. To accommodate the physical limitations of the model, the model and instructor or artist may agree a schedule such as 25 minutes on, 10 minutes off to relax the muscles. The model's level of experience and skill may be taken into account in determining the length of the posing session and the difficulty of the poses.

Poses generally fall into three categories: standing, seated and reclining. Within each of these there are varying levels of difficulty, so one kind is not always easier than another. Artists and life drawing instructors will often prefer poses in which the body is being exerted, for a more dynamic and aesthetically interesting subject. Common poses such as standing twists, slouched seated poses and especially the classical contrapposto are difficult to sustain accurately for any amount of time, although it is often surprising what a skilled professional model can do. Poses can range in length from several seconds to many hours. Short dynamic poses may be used for gesture drawing exercises, with the model striking a pose - which can include strenuous or precarious positions that could not be sustained for a longer pose - just long enough for the artist to quickly capture the essence of it. Active, gestural, or challenging standing poses are often scheduled at the beginning of a session when the models' energy level is highest. Short exercises in drawing classes typically run from 5 to 25 minutes. For extended poses in which the model will take one or more breaks, chalk marks and/or masking tape are often used to help the model resume the same pose. These breaks - during which the model usually wears a robe or puts on clothing - allow the model to stretch, relax and attend to other needs.

In life drawing rooms of art schools, the platform where the life model poses for the students is sometimes referred to as the dais. 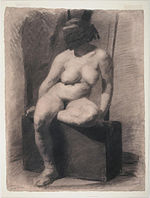 Models for life drawing classes are often entirely nude, apart from visually non-obstructive personal items such as small jewelry and sometimes eyeglasses. In a job advertisement seeking nude models, this may be referred to as being "undraped" or "disrobed". (Alternatively, a cache-sexe may be worn. Eadward Muybridge's historic scientific studies of the male and female form in motion, for example, has examples of both usages.)

In Western countries, there is generally no objection to either sex posing nude for or drawing members of the opposite sex. However, this was not always so in the past, particularly prior to the 20th century. In 1886, Thomas Eakins was famously dismissed from the Pennsylvania Academy of Fine Art for removing the loincloth from a male model in a mixed classroom. Similarly, Victorian modesty required the female model to pose nude with her face draped (illustration). European arts academies did not allow women to study the nude at all until the end of the nineteenth century. According to RAM guidelines in the U.K., art instructors and institutions consider the incident of a male model gaining an erection while posing cause for termination of the model's contract, or at any rate, grounds for not hiring him again.[1] Policies may vary in other parts of the world.

During art school classes or an academic setting, it is commonly prohibited for anyone (including the instructor) to touch the model. Very close examination or requests for adjustment are typical—with the permission of the model. A few institutions allow only the instructor to speak directly with the model.

Additionally, nude models are sometimes paid to model as part of a performance or work of art; a fine example is the work of Vanessa Beecroft. Nude modeling can also occur in a private setting as demonstrated in the films As Good as It Gets and Maze. Finally, a person can be their own model, while solo, with or without mirrors. 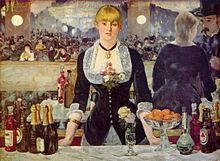 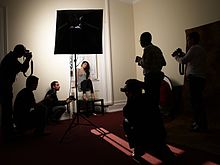 A photographic model posing for a group

The clothed or costumed model is as much in demand as the nude, especially in commercial art. Nineteenth century models who applied for work at painters' studios were expected to wear and look appropriate in period dress or character costume, and sometimes supply the garments themselves. Today, many art and design schools still train their students to sketch the dressed figure, and often pay more for costume models, who maintain their own wardrobes, than for nude models.

Unlike fashion modeling, the setting in an art school classroom is for the purpose of learning how to draw humans of different shapes, ages, and ethnicities. Thus, there are few limitations on who the model could be. However, younger and better looking models are often more likely to be hired and re-hired, other things being equal.[2] If the modeling is done nude, children are excluded as they are considered too young to pose. The minimum age can vary, but is often 15 to 18. Despite being nonsexual in nature, this may be influenced by the age of consent (i.e. at or slightly below).

In some countries there are organizations which concern themselves with the competence, conduct and reliability of art models. An example is the Register of Artists' Models (RAM) in the United Kingdom. Some basic training is offered to beginners and membership is by audition – to test competence, not to discriminate on grounds of physical characteristics. RAM also acts as an important employment exchange for models and publishes the 'RAM Guidelines', which are widely referred to by models and employers.

A similar organization in the United States, the Bay Area Models Guild in California, was founded in 1947. The Life Models' Society of Victoria, based in Melbourne, Australia was founded in 1989.[3] It is the most vibrant and professional group in Australia and its existence has assisted in the pay and rights of models being adhered to within Victoria, as opposed to the other states.[4] The Figure Models Guild of Washington, D.C. was founded in 2002.[5] 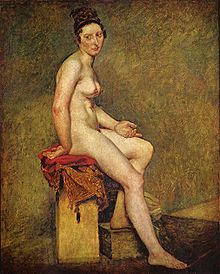 The Greeks, who had the naked body constantly before them in the exercises of the gymnasium, had far less need of professional models than the moderns; but it is scarcely likely that they could have attained the high level reached by their works without constant study from nature. It was probably in Ancient Greece that models were first used. The story told of Zeuxis by Valerius Maximus, who had five of the most beautiful virgins of the city of Crotone offered him as models for his picture of Helen, proves their occasional use. The names of some of these models of the era are themselves known, such as the beautiful Phryne who modeled for many paintings and sculptures.

During the Renaissance, painters generally made use of their relations and friends as models, of which many examples might be quoted from Venice, Florence, Rome and other places, and the stories of Titian and the duchess of Ferrara and of Botticelli and Simonetta Vespucci, go to show that ladies of exalted rank were sometimes not averse to having their charms immortalized by the painter's brush. Paid models were not unknown, as the story of the unfortunate contadino used by Jacopo Sansovino as model for his statue of the Bacchus will show.[6]

Artists' models as a special class appeared when the establishment of schools for the study of the human figure created a regular demand, and since that time the remuneration offered has ensured a continual supply. In the media era, modeling is also coveted as a way to achieve notoriety or even celebrity status opening the way to other careers, such as acting. 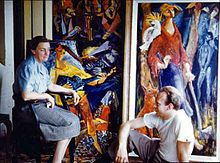 Models are hired by a variety of creative professionals, including not only painters and sculptors, but any artist, designer, or craftsman who requires a human model for study. The conventions for this type of modeling are much less well defined, especially as the models are often friends or family. Artists who regularly hire strangers may observe art school standards in order to make models feel more comfortable, and to avoid possible legal issues.

Professional artists often have a circle of models they work through, hiring and adding as time passes. When a comfortable working relationship is established, many painters and artists relax their standards and models do the same. Longer poses, more comfortable and casual environments, and more collegial relationships may develop. However, in a professional studio environment, with an artist on a deadline or with commission guidelines, art school and art-model industry standards generally apply, with higher rates of pay and longer, more demanding poses.