The Class A4 is a class of streamlined 4-6-2 steam locomotive, designed by Nigel Gresley for the London and North Eastern Railway in 1935. Their streamlined design gave them high-speed capability as well as making them instantly recognizable, and one of the class, 4468 Mallard, still claims the official record as the fastest steam locomotive in the world. 35 of the class were built to haul express passenger trains on the East Coast Main Line route from London Kings Cross via York and Newcastle Upon Tyne to Edinburgh, Scotland. They remained in service on the East Coast mainline until the early 1960s when they were replaced by Deltic diesel locomotives. Several A4s saw out their remaining days until 1966 in Scotland, particularly on the Aberdeen - Glasgow 3-hour express services (for which they were used improve the timing from 3.5 hours).

Gresley introduced the Class A4 locomotives in 1935 to be integrated into a new streamlined train called the Silver Jubilee that was to run between London King's Cross and Newcastle. The new service was named in celebration of King George V's 25th year of reign.

During a visit to Germany in 1933, Gresley had been inspired by the high-speed, streamlined "Flying Hamburger" diesel multiple unit trains, and indeed the LNER had considered purchasing similar trains for use from London to Newcastle. However, the diesel units of the time did not have the desired passenger carrying capacity and the capital investment in the new technology was prohibitive.

Gresley was sure that steam could do the job equally well and with a decent fare-paying load behind the locomotive and so, following trials in 1935 with one of Gresley's A3 Pacifics No.2750 Papyrus, which recorded a new maximum of 108 mph (173.8 km/h), and completed the journey in under four hours, the LNER authorised Gresley to produce a streamlined development of the A3.[citation needed] Initially four locomotives were built, all with the word 'silver' as part of their names, the first being 2509 Silver Link; the others being 2510 Quicksilver, 2511 Silver King and 2512 Silver Fox. During a press run to publicise the service, Silver Link twice achieved a speed of 112.5 mph (181.1 km/h), breaking the British speed record and sustained an average of 100 mph (160.9 km/h), over a distance of 43 mi (69.2 km).[2]

Following the commercial success of the Silver Jubilee train, other streamlined services were introduced: the Coronation (London-Edinburgh, July 1937) and the West Riding Limited (Bradford & Leeds-London & return, November 1937) for which more A4s were specially built. In August 1936 the Silver Jubilee train on the descent of Stoke Bank headed by 2512 Silver Fox driven by George Henry Haygreen achieved a maximum of 113 mph (181.9 km/h), then the highest speed ever attained in Britain with an ordinary passenger train.[citation needed]

The A4 Pacifics (with the 4-6-2 wheel arrangement) were designed for high-speed passenger services. The application of internal streamlining to the steam circuit, higher boiler pressure and the extension of the firebox to form a combustion chamber all contributed to a more efficient locomotive than the A3, consumption of both coal and water being reduced. A further improvement to the design was the fitting of a Kylchap double-chimney first introduced on 4468 Mallard, built in March 1938. This device improved the free-steaming capabilities of the locomotives further, and the final three locomotives of the class (4901 Capercaillie, 4902 Seagull and 4903 Peregrine) were fitted with the Kylchap exhaust from new; and eventually the rest of the class acquired it in the late 1950s.

This class of locomotive was also noted for its streamlined design, which not only improved its aerodynamics, thus increasing its speed capabilities, but also created an updraught to lift smoke away from the driver's vision, a problem inherent in the earlier A3 design.[citation needed] The distinctive design made it a particularly attractive subject for artists, photographers and film-makers. The A4 Class locomotives were known affectionately by train spotters as "streaks".

The streamlining side skirts (valances) that were designed by Oliver Bulleid to aerofoil shape, and fitted to all the A4 locomotives, were removed during the Second World War to improve access to the valve gear for maintenance and were not replaced.[3] This apart, the A4 was one of very few streamlined steam locomotive designs in the world to retain its casing throughout its existence. 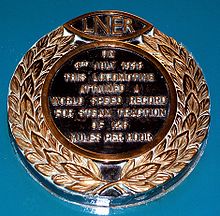 Although the dynamometer car indicated a top speed of 126 mph (202.8 km/h), Sir Nigel Gresley never accepted this as the record-breaking maximum. He claimed this speed could only have been attained over a few yards, though he was comfortable that the German speed record of 124.5 mph (200.4 km/h) had been surpassed.[citation needed] Close analysis of the data of the record runs, however, does not confirm his confidence, although the Mallard's speed most probably equalled that of the German BR 05 002.[4] The Mallard record has also been questioned because it reached its maximum speed only on a downhill run and actually failed technically in due course, whereas 05 002's journey was on level grade and the engine did not yet seem to be at its limit.[4]

At the end of Mallard's record attempt, the middle big end (part of the motion for the inside cylinder) was found to have run hot (indicated by the bursting of a heat-sensitive "stink bomb" placed in the bearing for warning purposes), the bearing metal having melted, which meant that the locomotive had to stop at Peterborough rather than continue on to London.[5] Deficiencies in the alignment of the Gresley-Holcroft derived motion meant that the inside cylinder of the A4 did more work at high speed than the two outside cylinders - indeed on at least one occasion this led to the middle big end wearing to such an extent that the increased piston travel knocked the ends off the middle cylinder[6] - and this overloading was mostly responsible for the failure.[citation needed]

No. 60034 Lord Faringdon hauling a train at Peterborough railway station in 1959.

Although newer Pacifics had been introduced since the war, and although the streamlined trains were never reinstated, the A4s continued on top link duties, notable on the London to Edinburgh services.

Improved methods of aligning the Gresley conjugated valve gear in the 1950s led to tighter tolerances for the bearings used within it and consequently to almost total eradication of the overloading of the middle cylinder.[citation needed] History repeated itself with the inside big end being replaced by one of the Great Western type, after which there was no more trouble, provided maintenance routines were respected.[7]

The wholesale application of double Kylchap chimneys to the entire class was entirely due to the persistence of P N Townend, the Assistant Motive Power Superintendent at King's Cross from 1956. He at first met with considerable resistance from higher authority. When permission was eventually given, it was found that the economy obtained over the single chimney A4s was from 6-7 pounds of coal per mile, which more than justified the expense of the conversion.[8]

The first four locomotives included the word 'silver' in their names, because they were intended to haul the 'Silver Jubilee' train. No 2512 Silver Fox of this batch carried a stainless-steel fox near the centre of the streamline casing on each side, which were made by the Sheffield steelmakers Samuel Fox and Company.[11] The next batch of A4s were named after birds, particularly those that were fast flyers; Gresley being a keen bird-watcher. Five (4488–92) were named after Commonwealth countries to haul the new Anglo-Scottish 'Coronation' train; and two (4495/6), intended to haul the new 'West Riding Limited', received names connected to the wool trade: Golden Fleece and Golden Shuttle.[12]

A rare gathering of three ex-LNER A4 locomotives at Grosmont, North Yorkshire Moors Railway, 60009 Union of South Africa, 60007 Sir Nigel Gresley and 60019 Bittern line up alongside each other

A4 No.4498 was the hundredth Gresley Pacific to be built and someone had the idea of naming it after the designer himself. This did however start a rash of renamings of other A4s, usually of directors of the LNER and many of the more obscure bird names (and a few of the better ones: Kestrel, Osprey for example) were exchanged for somewhat less inspiring names.[citation needed]

One locomotive was withdrawn after being damaged beyond repair in a German bombing raid on York on 29 April 1942 during World War II - No.4469 Sir Ralph Wedgwood, which at the time had been overhauled and was based at Gateshead. It was running local trains to run it in, and was stabled in York North Shed (now the National Railway Museum) where it suffered a direct hit. However, its tender survived and was later coupled to a Thompson A2/1.

A4s have appeared numerous times in popular culture, both during and after preservation. The class's first film appearance was 2509 Silver Link, which appears in a scene in the Will Hay film, Oh! Mr. Porter, in which Hay accidentally ruins its naming ceremony. Post war, A4 No.60017 Silver Fox features heavily in the 1954 British Transport Film Elizabethan Express, which follows the revival of non-stop London to Edinburgh runs and features footage of the water trough and corridor tender in use. A few years later, the 1959 version of The Thirty-Nine Steps features colour photography of A4 No.60010 Dominion of Canada amongst others in their post-war British Railways Brunswick green livery. This scene was subsequently parodied in the 1961 film Carry on Regardless.

In The Railway Series books by the Rev. W Awdry, the A4 No. 4468 Mallard is alluded to in the book Gordon the High Speed Engine by Christopher Awdry as one of Gordon's "Doncaster cousins" who did 126 miles an hour. Mallard appears as a character in the later book Thomas and the Great Railway Show. In the subsequent television series Thomas and Friends, the A4-based character Spencer, appears occasionally. Spencer bears a strong resemblance to Silver Link and is portrayed as a rather snooty character. Olwin from the children's series, Chuggington, resembles an A4 minus the tender making her a tank engine. A painting of 22 Mallard by Paul Gribble appears on the cover of the 1993 Blur album Modern Life is Rubbish.

The distinctive shape of the A4 has made it an obvious choice for model manufacturers, with examples being made in the majority of the popular scales, including a wooden example for the Brio wooden railway. Notably, one of the first two Hornby Dublo locomotive models produced, in 1938, was an A4,[13] and in 2004[citation needed] Hornby produced an 'OO'-scale live steam version, that used an electrically-heated boiler to produce steam – not previously possible in such a small model. Trix produced an OO gauge model A4 from 1970; it was re-branded as a Liliput model in 1974 and survives to this day in modified form as a Bachmann model - Kader, Bachmann's parent company, had bought Liliput in 1993.[14]