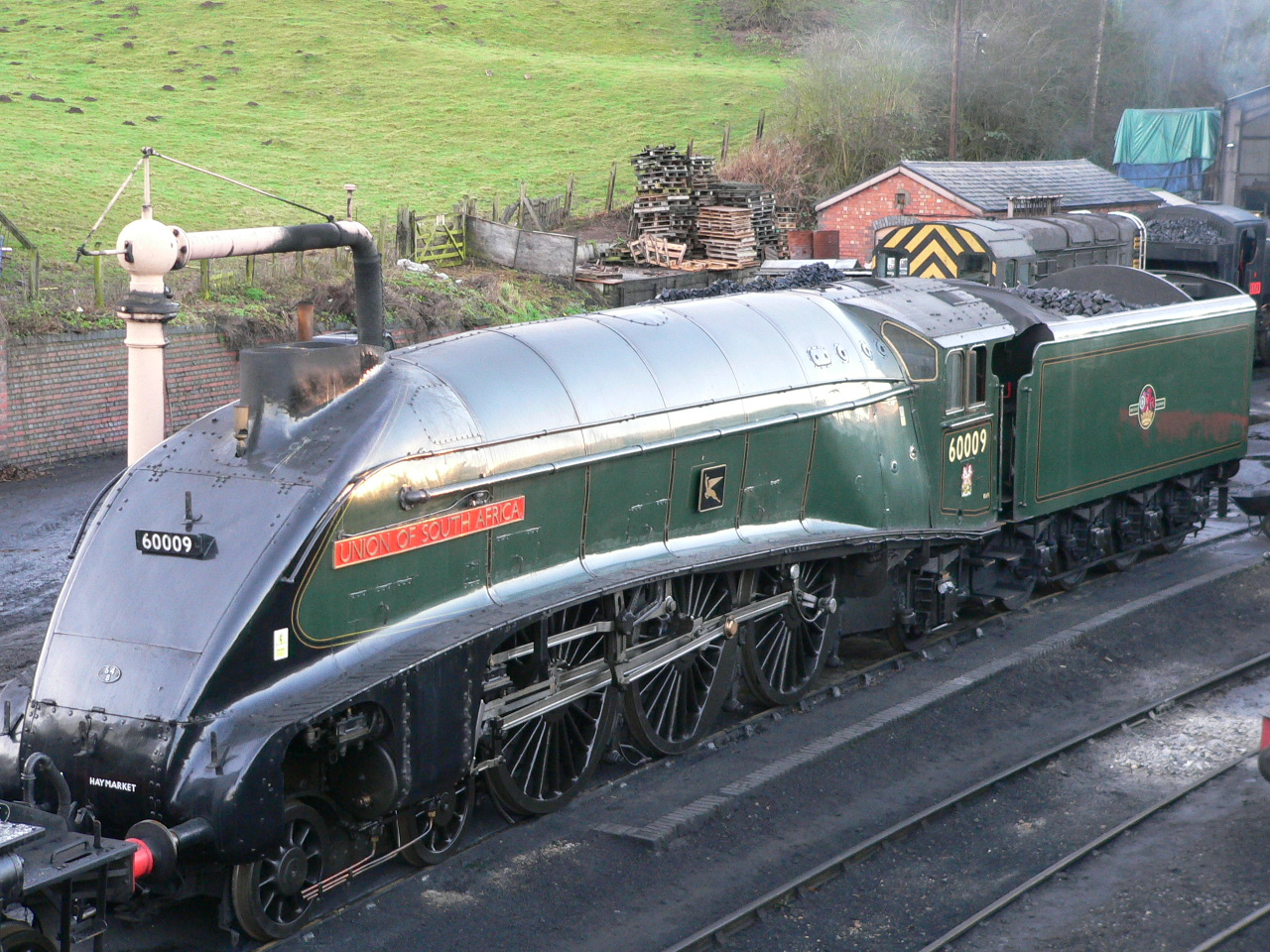 Built for the in and originally numbered 4488, it was named after the then newly-formed . Although it had previously been allocated the name "Osprey" on , when it came out of the paint shop on , it had been renamed. "Osprey" name plates were fitted to the locomotive during the 1980s and early 1990s due to the politics of the time. Its name has since reverted to Union of South Africa. The works number of Union of South Africa was 1853; the plaques are located in the cab itself and not on the exterior cab sides as is the usual practice.

The plaque on the side of the locomotive was donated on by a newspaper proprietor. Only the one plaque was fitted on the left hand side of the locomotive. The position has changed on a couple of occasions: originally the plaque was on the boiler side, being moved to the cabsides in preservation. Recently, the plaque has reverted back to the historically correct position. 60009 is also fitted with a South African Railways-type chime whistle.

Union of South Africa has worn many liveries throughout her career. The first livery she wore was as 4488 in garter blue, applied on . The next livery applied was LNER wartime black on . This livery was amended on when the "L" and "R" were removed to confuse potential spies, leaving the all-black locomotive with just "NE" on the tender. saw Union of South Africa regain garter blue with red and white lining. Her number was changed to just "9" on , under the renumbering scheme of Gresley's successor, . She gained a stainless steel number 9 during this repaint. saw 60009 applied with the experimental dark blue livery (as 60007 Sir Nigel Gresley is wearing currently in 2008). Finally on , Union of South Africa was painted in British Railways brunswick green livery. She has worn this livery throughout preservation to date.

As with all 35 of the Gresley A4 pacific steam locomotives, Union of South Africa was fitted with streamlines valances, or side skirting, when she was built. This was found to hinder maintenance and, like her sisters, it was removed. 4488 lost her valances during a works visit .

60009 had a double chimney fitted on . This feature was first fitted to 4468 Mallard back in 1938. As the safety requirements were tightened after the Harrow Rail crash, Automatic Warning Systems or AWS was fitted to all locomotives. 60009 was so fitted on . At the same time this was done, a Stone-Smith type speed recorder was also fitted.

Union of South Africa was allocated to shed in from new and she had her only shed transfer to .

On it hauled the last booked steam hauled train from Kings Cross. It was twenty minutes late through Grantham owing to a broken rail at High Dyke. It was the last loco to be overhauled at Doncaster whilst in service. 60009 was withdrawn from British railways service on .

Purchased by John Cameron in July 1966, 60009 was preserved on the now-defunct in . There the mighty A4 travelled the 3 miles of track near . Now, she travels all over the country visiting many preserved railways and hauling mainline steam specials such as the .

It has accumulated the highest mileage of any locomotive in the class. In January 2007, it left the , where it was based for many years and went to Crewe for fitment of (OTMR) equipment. In May 2007 it was moved to Scotland to work the Railway Touring Company's The Great Britain railtour and thence to its new base at Thornton. Whilst this is its home shed it travels widely south of the border with its dedicated support team working tours all over England. Last summer it hauled steam specials to Scarborough from York via Knaresborough, Harrogate and Leeds.

In 2008 it was continuing to work with the [http://www.railwaytouring.co.uk Railway Touring Co] and was scheduled to pull trains running between York and Edinburgh on several occasions during the first half of 2008. Union of South Africa appeared at the North Yorkshire Moors Railway LNER Festival 2008, along with 60007 Sir Nigel Gresley and 60019 Bittern (This was the first time that all 3 locomotives were together in preservation). Also 4771 Green Arrow, B1 61264 and J15 65462. This was Green Arrow's last appearance before its boiler certificate expired and the National Railway Museum have no plans to overhaul it.(RCB)

* cite book
first = W.B.
last = Yeadon
title = Yeadon's Register of LNER Locomotives: Volume Two: Gresley A4 and W1 classes.
publisher = Booklaw/Railbus is association with Challenger
ISBN: 1 871608 15 5
year = 2001 Histories of the A4 and W1 classes of locomotive with details of repairs and liveries etc.