The Deutsche Reichsbahn's Class 05 was a German class of three express passenger steam locomotives of 4-6-4 wheel arrangement in the Whyte notation, or 2'C2' in the UIC notation used in continental Europe. They were part of the DRG's standard locomotive (Einheitslokomotive) series. 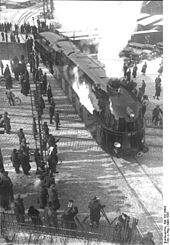 Since the success of the Diesel high speed trains like the Flying Hamburger in the middle of the 1930s, locomotive industry worked on faster steam locomotives. After speed tests with a streamlined DRG Class 03 the Borsig locomotive factorys[note 1] produced three engines:

The locomotives did regular service in FD express passenger trains, e.g. FD 23 from Hamburg to Berlin. The design speed was 175 km/h (109 mph). In 1944, the streamline plates were removed. 05 003 had been rebuilt and lost the cab forward design. 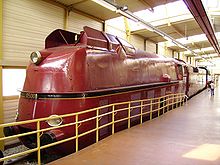 05 001 in the Nuremberg Transport Museum

After World War II, the three engines came to the engine shop in Hamm, Westfalia. Since there were only three specimens of the 05, DB thought to scrap them. But then the engines were sent to Krauss-Maffei to be restored. 05 003 went into regular service in 1950, the other two in 1951. Boiler pressure was reduced to 16 bar (1600 kPa or 230 lbf/in²), hence the engines lost some of their old power. All three locomotives were used to haul express trains until 1958.

Mostly the 05 hauled the FD (long distance express) trains "Hanseat" and "Domspatz" on the run Hamburg - Cologne - Frankfurt. The regular top speed of the trains was 140 km/h. On this 703 km run the 05 operated trains did the longest run with steam traction in the DB network. July 1958 the 05 were replaced by the diesel-hydraulic DB class V 200.

05 001 went to the Verkehrsmuseum Nürnberg, where it can be seen streamlined with its original red livery. The other two locomotives were scrapped in 1960.