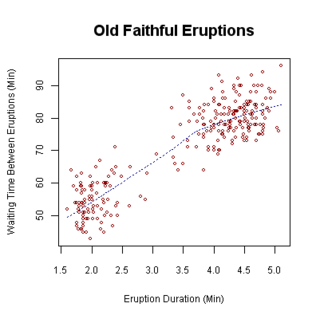 Scatterplot of the eruption interval for Old Faithful (a geyser).

A plot is a graphical technique for representing a data set, usually as a graph showing the relationship between two or more variables. The plot can be drawn by hand or by a mechanical or electronic plotter. Graphs are a visual representation of the relationship between variables, very useful for humans who can quickly derive an understanding which would not come from lists of values. Graphs can also be used to read off the value of an unknown variable plotted as a function of a known one. Graphs of functions are used in mathematics, the sciences, engineering, technology, finance, and other areas.

These and similar techniques are all valuable and are mainstream in terms of classical analysis. There are also many statistical tools generally referred to as graphical techniques. These include:[1]

Graphical procedures such as plots are a short path to gaining insight into a data set in terms of testing assumptions, model selection, model validation, estimator selection, relationship identification, factor effect determination, outlier detection. Statistical graphics give insight into aspects of the underlying structure of the data.[1]

Graphs can also be used to solve some mathematical equations, typically by finding where two plots intersect.

showing i on a horizontal axis and j on a vertical axis, where

is a phase space trajectory.

Types of graphs and their uses vary very widely. A few typical examples are: