This is a list of fictitious films that have been referenced in various forms of media. These "films" are usually part of the storyline in a movie or television episode, usually either as a prop or as a recurring theme visited throughout, such as the fictitious Stab trilogy in the Scream franchise.

Each fictitious film listed is categorised under the film's genre, with its source and, if applicable, the film's supposed release date. 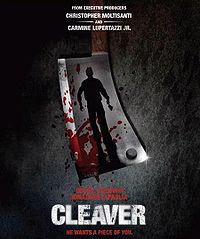 Poster for the fictional film Cleaver, a recurring feature of the television series The Sopranos.