Martial arts film is a film genre. A sub-genre of the action film, martial arts films contain numerous fights between characters, usually as the films' primary appeal and entertainment value, and often as a method of storytelling and character expression and development. Martial arts are frequently featured in training scenes and other sequences in addition to fights. Martial arts films commonly include other types of action, such as stuntwork, chases, and/or gunfights.[1][2][3] 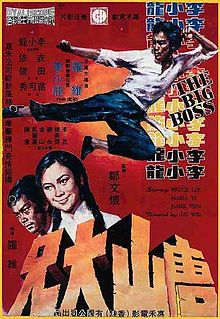 Martial arts films contain many characters who are martial artists, and these roles are often played by actors who are real martial artists. If not, actors frequently train in preparation for their roles, or the action director may rely more on stylized action or filmmaking tricks like camera angles, editing, doubles, undercranking, wire work, and computer-generated imagery. Trampolines and springboards can also be used to increase the height of jumps. These techniques are sometimes used by real martial artists as well, depending on the style of action in the film.[7]

During the 1970s and 1980s, the most visible presence of martial arts films was the hundreds of English dubbed kung fu and ninja films produced by the Shaw Brothers, Godfrey Ho, Joseph Lai, and other Hong Kong producers. These films were widely broadcast on North American television on weekend timeslots that were often colloquially known as Kung Fu Theater, Black Belt Theater, or variations thereof.

Martial arts films have been produced all over the world, but the genre has been dominated by Hong Kong action cinema, peaking from 1971 with the rise of Bruce Lee until the mid 1990s with a general decline in the industry.[8] Other notable figures in the genre include Jackie Chan, Jet Li, Sammo Hung, Yuen Biao, and Donnie Yen.

Sonny Chiba has appeared with karate and jidaigeki from Japan of the 1970s. Hollywood has also participated in the genre with actors such as Chuck Norris, Jean-Claude Van Damme, Steven Seagal, Brandon Lee (son of Bruce Lee), Wesley Snipes, Gary Daniels, Mark Dacascos, and Jason Statham.[9] In recent years, Thailand's film industry has become an international force in the genre with the films of Tony Jaa,[10] and the Indonesian and Vietnamese film industries have followed suit with Merantau starring Iko Uwais[11][12][13] and The Rebel (2007 Vietnamese film) and Clash (film) starring martial artist and film star Johnny Tri Nguyen. Women have also played key roles in the genre, including such actresses as Kathy Long, Michelle Yeoh, Angela Mao, and Cynthia Rothrock.[14][15][16] In addition, western animation has ventured into the genre with the most successful effort being the internationally hailed DreamWorks Animation film franchise, Kung Fu Panda, starring Jack Black and Angelina Jolie.

Kung Fu films are a significant movie genre in themselves. Like westerns for Americans, they have become an identity of Chinese cinema. As the most prestigious movie type in Chinese film history, Kung Fu movies were among the first Chinese films produced and the wuxia period films(武俠片) are the original form of Chinese Kung Fu films. The wuxia period films came into vogue due to the thousands of years popularity of wuxia novels(武俠小說). For example, Jin Yong[17] and Gu Long,[18] their wuxia novels directly led to the prevalence of wuxia period films.