Ehlers–Danlos syndrome (EDS) (also known as "Cutis hyperelastica"[1]) is a group of inherited connective tissue disorders, caused by a defect in the synthesis of collagen (Type I or III). The collagen in connective tissue helps tissues to resist deformation. In the skin, muscles, ligaments, blood vessels and visceral organs, collagen plays a very significant role and with increased elasticity, secondary to abnormal collagen, pathology results. Depending on the individual mutation, the severity of the syndrome can vary from mild to life-threatening. There is no cure, and treatment is supportive, including close monitoring of the digestive, excretory and particularly the cardiovascular systems. Corrective surgery may help with the frequent injuries that may develop in certain types of EDS, although the condition means that extra caution is advised and special practices observed.[2]

The syndrome is named after two doctors, Edvard Ehlers of Denmark, and Henri-Alexandre Danlos of France, who identified it at the turn of the 20th century.[3]

In the past, there were more than 10 recognized types of Ehlers–Danlos syndrome. In 1997, researchers proposed a simpler classification that reduced the number of major types to six and gave them descriptive names.[4] These six major types are listed here. Other types of the condition may exist, but they have been reported only in single families or are not well characterized. Except for hypermobility, the specific mutations involved have been identified and they can be precisely identified by genetic testing; this is valuable due to a great deal of variation in individual presentation of symptoms which may confuse classification of individuals on purely symptomatic basis. In order of prevalence in the population, they are:

Although the above classifications are well defined, it is rare for a case to fit neatly in a single category, and cross-over symptoms lead to under-diagnosis or mis-diagnosis. So patients should not rely on the "fact" of having a certain type of EDS if cross-over symptoms are evident and might be life-threatening.

"The large number of distinct types of the Ehlers–Danlos syndrome that have already been identified indicates great heterogeneity, but clearly that heterogeneity is not exhausted by the present classification." [1] Forms of EDS within this category may present with soft, mildly stretchable skin, shortened bones, chronic diarrhea, joint hypermobility and dislocation, bladder rupture, or poor wound healing. Inheritance patterns within this group include X-linked recessive, autosomal dominant, and autosomal recessive. Examples of types of related syndromes other than those above reported in the medical literature include: 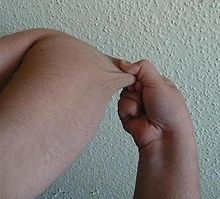 Signs vary widely based on which type of EDS the patient has. In each case, however, the signs are ultimately due to faulty or reduced amounts of collagen. EDS most typically affects the joints, skin, and blood vessels, the major signs and symptoms include:

Other, less common signs and complications may include:

Because it is often undiagnosed or misdiagnosed in childhood, some instances of Ehlers–Danlos syndrome have been mischaracterized as child abuse.[15] The pain associated with this condition is a serious complication.

Mutations in the following can cause Ehlers–Danlos syndrome:

Mutations in these genes usually alter the structure, production, or processing of collagen or proteins that interact with collagen. Collagen provides structure and strength to connective tissue throughout the body. A defect in collagen can weaken connective tissue in the skin, bones, blood vessels, and organs, resulting in the features of the disorder.

Inheritance patterns depend on the type of Ehlers–Danlos syndrome. Most forms of the condition are inherited in an autosomal dominant pattern, which means only one of the two copies of the gene in question must be altered to cause the disorder. The minority are inherited in an autosomal recessive pattern, which means both copies of the gene must be altered for a person to be affected by the condition. It can also be an individual (de novo or "sporadic") mutation. Please refer to the summary for each type of Ehlers–Danlos syndrome for a discussion of its inheritance pattern.

A diagnosis can be made by clinical observation. Both DNA and biochemical studies can be used to help identify affected individuals. In some cases, a skin biopsy has been found to be useful in confirming a diagnosis. Unfortunately, these tests are not sensitive enough to identify all individuals with EDS. If there are multiple affected individuals in a family, it may be possible to perform prenatal diagnosis using a DNA information technique known as a linkage study.

There are several disorders that have some of the characteristics of Ehlers–Danlos syndrome. For example, in cutis laxa the skin is loose, hanging, and wrinkled. In EDS, the skin can be pulled away from the body but is elastic and returns to normal when let go. In Marfan syndrome, the joints are very mobile and similar cardiovascular complications occur. In the past, Menkes disease, a copper metabolism disorder, was thought to be a form of Ehlers–Danlos syndrome. Because of these similar disorders, a correct diagnosis is very important.[16]

There is no cure for Ehlers Danlos Syndrome. The treatment is supportive. Close monitoring of the cardiovascular system, physical therapy, occupational therapy, and orthopedic instruments (e.g., wheelchairs, bracing) may be helpful. One should avoid activities that cause the joint to lock or overextend.

A physician may prescribe bracing to stabilize joints. Surgical repair of joints may be necessary at some time. Physicians may also consult a physical and/or occupational therapist to help strengthen muscles and to teach people how to properly use and preserve their joints. To decrease bruising and improve wound healing, some patients have responded to ascorbic acid (vitamin C). [17]

In general, medical intervention is limited to symptomatic therapy. Prior to pregnancy, patients with EDS should have genetic counseling. Children with EDS should be provided with information about the disorder, so they can understand why contact sports and certain other physically stressful activities should be avoided. Children should be taught early on that demonstrating the unusual positions they can maintain due to loose joints should not be done as this may cause early degeneration of the joints. Family members, teachers and friends should be provided with information about EDS so they can accept and assist the child as necessary.

The outlook for individuals with EDS depends on the type of EDS with which they have been diagnosed. Symptoms vary in severity, even within one sub-type, and the frequency of complications changes on an individual basis. Some individuals have negligible symptoms while others are severely restricted in their daily life. Extreme joint instability, pain, and spinal deformities may limit a person's mobility. Most individuals will have a normal lifespan. However, those with blood vessel involvement have an increased risk of fatal complications.

EDS is a lifelong condition. Affected individuals may face social obstacles related to their disease on a daily basis. Some people with EDS have reported living with fears of significant and painful ruptures, their condition worsening, becoming unemployed due to physical and emotional burdens, and social stigmatization in general.

Ehlers–Danlos syndrome is an inherited disorder estimated to occur in about 1 in 5000 births worldwide. Initially, prevalence estimates ranged from 1 in 250,000 to 1 in 500,000 people, but these estimates were soon found to be vastly inaccurate as the disorder received further study and medical professionals became more adept at accurately diagnosing EDS. In fact, many experts now believe that Ehlers–Danlos syndrome may be far more common than the currently accepted estimate due to the wide range of severities in which the disorder presents.[18] However, the prevalence of the six types differs dramatically. The most commonly occurring type is the hypermobility type, followed by the classical type. The other types of Ehlers–Danlos syndrome are very rare. For example, fewer than 10 infants and children with the dermatosparaxis type have been described worldwide. Ehlers–Danlos affects both males and females of all racial and ethnic backgrounds, although some types are more common among certain groups than others.

Ehlers–Danlos-like syndromes have been shown to be hereditary in Himalayan cats, some domestic shorthair cats, and in certain breeds of cattle. It is seen as a sporadic condition in domestic dogs.

DSLD: Degenerative Suspensory Ligament Desmitis is a similar condition now being researched in all breeds of horses. Though it was originally notated in the Peruvian Paso and thought to be a condition of overwork and older age, the disease is being recognized in all age groups and all activity levels. It has even been noted in newborn foals. The latest research has led to the renaming of the disease after the possible systemic and hereditary components now being delineated by the University of Georgia. Equine Systemic Proteoglycan Accumulation.[23][24]