CITY-DT, Channel 57 (known on-air as Citytv Toronto or simply Citytv), is a television station based in Toronto, Ontario, Canada owned and operated by Rogers Media. CITY was best known for its unconventional approach to news and local programming, creating the basis upon which the Citytv television system (of which it is the flagship station) was built.

Former version of the Citytv logo, used from 1972 - 2005. The red-blue version no longer appears on-air but it is still present on several Citytv vehicles.

CITY signed on air for the first time on September 28, 1972, as an independent station. It originally transmitted a 31 kW signal on UHF channel 79, since all the VHF licences in the Toronto area were taken. The founding ownership group Channel Seventy-Nine Ltd. consisted of Phyllis Switzer, Moses Znaimer, Jerry Grafstein, Edgar Cowan and others. The studio was located at 99 Queen Street East near Church Street.

The station was in debt by 1975. Multiple Access Ltd. (the owners of CFCF in Montreal) purchased 45% of the station, and sold its stake to CHUM Limited three years later. CITY was purchased outright by CHUM in 1981 with the sale of Moses Znaimer's interest in the station. Znaimer remained with the station as an executive until 2003, when he retired from his management role but continued to work with the station on some production projects.

In 1976, the station began broadcasting at 208 kW from the CN Tower. The station moved from channel 79 to channel 57 on July 1, 1983, because of complaints that it was interfering with mobile radio in the Toronto area, and so that the frequencies used by channels 70 to 83 could be reclaimed for use by new AMPS mobile phones as a result of a CCIR international convention in 1982. 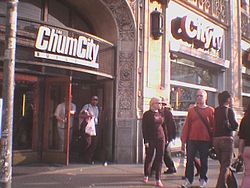 In 1987, CITY and the other CHUM-owned television stations moved to the headquarters at 299 Queen Street West, which became one of the most recognizable landmarks in the city.

CITY launched a test broadcast of its digital signal using the ATSC DTV standard on January 16, 2003, and began regular digital transmission on March 3 of the same year, becoming the first digital television station in Canada.

Despite efforts to extend the brand to other major markets, for 30 years CITY was the only Canadian station to identify on-air as "Citytv", making "Citytv" and "CITY" interchangeable names for the station. In 2001, however, CHUM purchased Vancouver's CKVU from Canwest Global. CKVU was re-branded as Citytv in 2002, making Citytv a two-station system. (See 2001 Vancouver TV realignment.)

In 2005, three more Citytv stations were added in Calgary, Edmonton and Winnipeg after CHUM purchased the A-Channel television stations and the other assets owned by Craig Media, the existing A-Channel brand was revamped and was transferred to CHUM's former NewNet stations. On the day when the three A-Channel stations were rebranded as Citytv, the flagship CityPulse newscast was rebranded CityNews.

On July 12, 2006, CTVglobemedia announced its offer to acquire CHUM Limited and its assets, including the Citytv stations, and related cable properties.[1] Since CTV already owned local stations in all Citytv markets (including Toronto, where CTV owns and operates CFTO), the Canadian Radio-television and Telecommunications Commission (CRTC) stipulated the sale of the Citytv stations as a condition for the approval of the CHUM purchase. The Citytv stations (including CITY) were subsequently sold to Rogers Communications, with the sale approved by the CRTC on September 28, 2007, and Rogers officially taking ownership on October 31 of the same year. (See 2007 Canada broadcast TV realignment.)

CTV kept ownership of 299 Queen Street West, where CHUM's specialty television channels now owned by CTV (such as CP24, MuchMusic, Star!, Bravo! and Space) would remain. As such, Rogers had to find a new home for CITY-TV. Rogers subsequently purchased 33 Dundas Street East, the former Olympic Spirit building located at the edge of Dundas Square, for the use of its Toronto television stations, and CITY-TV moved into the new facility on September 8, 2009.[2][3]

Citytv has traditionally pursued a programming strategy targeting hip, young and urban audiences, as well as science fiction series, such as the Stargate and Star Trek franchises, with significant cult followings. The system has also sometimes aired more adult-oriented fare than most television stations, including Baby Blue Movies and the television edition of Naked News, both very late at night. Citytv also aired The Oprah Winfrey Show from its debut in 1986 until the start of the 1992-1993 season when the show's broadcasting rights were bought by CTV and its local affiliate CFTO-TV, which aired the show until the end of its run in 2011.

The station has also historically produced much more local programming than most other Canadian television stations, including the daily talk show CityLine (hosted first by Dini Petty, then Marilyn Denis, and now Tracy Moore); magazine series such as The New Music, Toronto Rocks, FashionTelevision, Life on Venus Ave. and MovieTelevision; and interactive series such as Speakers' Corner. As well, the station often pursued synergies with its sister cable networks, sharing programming with MuchMusic, Bravo!, Space and CP24.

On March 2, 2008, CITY aired its first Toronto Blue Jays baseball game, a spring training game against the Cincinnati Reds.[4] Citytv and the Blue Jays share common ownership by Rogers Media. This is not the first time that a live sport event has aired on a Citytv network station, it also was the Canadian broadcaster for ABC's Monday Night Football until its move to ESPN in 2006. Beginning in the 2007 NFL season as part of Rogers Media's broadcast rights with the NFL; two late regular season games are shown by CITY and Vancouver sister station CKVU-TV weekly, the opposite games air regionally on their respective Rogers Sportsnet feed. As a part of a series of games played at the Rogers Centre, CITY also became a part of the television network of the Buffalo Bills, adding their pre-season games to its lineup in the 2008 season.[5]

CITY-DT currently produces a total of 32 hours of local newscasts each week (with six hours on weekdays and one hour on weekends).

The weekend newscasts returned in March 2011, followed by the return of the weekday CityNews at Five and the half-hour expansion of Breakfast Television (with its start time moved up to 5:30 a.m., and expanding to 3½ hours as a result) on September 5, 2011.[8]

On November 9, 2010, Citytv cameraman, Bill Atanasoff, was struck by a car while crossing Kipling Avenue, near Albion Road. Atanasoff was heading to the scene of a police investigation in Rexdale when the incident occurred. He was rushed to a nearby hospital, was listed in stable condition,[15] and recuperated from his injuries.[16]