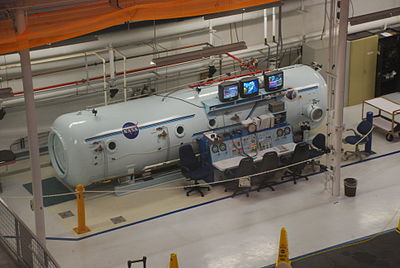 The decompression chamber at the Neutral Buoyancy Lab

The historically older open diving chamber, open diving bell or wet bell is in effect a large diving bell, utilising an open bottom, the equivalent of a moon pool, to equalise internal air pressure and external water pressure automatically without the need, necessarily, to measure and control it. An air compressor or bottled compressed air is required to maintain the volume of the air as it becomes compressed with increasing depth, or to make up for oxygen depleted by the occupants' breathing and for carbon dioxide removed from exhaled air by a carbon dioxide scrubber system. This type of diving chamber can only be used underwater, as the internal air pressure is directly proportional to the depth underwater and raising or lowering the chamber is the only way to adjust the pressure.

A sealable diving chamber, closed bell or dry bell is a pressure vessel with hatches large enough for people to enter and exit, and an compressed breathing gas supply to raise the internal air pressure. This type is called a hyperbaric chamber whether used underwater or at the water surface or on land to produce underwater pressures, though some use submersible chamber to mean those used underwater and hyperbaric chamber to mean those used out of water. There are two related terms which reflect particular usages rather than technically-different types:

When used underwater there are two ways to prevent water flooding in when the submersible hyperbaric chamber's hatch is opened. The hatch could open into a moon pool chamber, and then its internal pressure must first be equalised to that of the moon pool chamber. More commonly the hatch opens into an underwater airlock, in which case the main chamber's pressure can stay constant, while it is the airlock pressure which shifts. This common design is called a lock-out chamber, and is used in submarines, submersibles, and underwater habitats as well as diving chambers.

Another arrangement utilises a dry airlock between a sealable hyperbaric compartment and an open diving bell compartment (so that effectively the whole structure is a mixture of the two types of diving chamber).

When used underwater all types of diving chamber are attached to a diving support vessel by a strong cable for raising and lowering and an umbilical cable delivering compressed air, power, and communications, and all need weights attached or built in to overcome their buoyancy. The greatest depth reached using a cable-suspended chamber is about 1500 m; beyond this the cable becomes unmanageable.

In addition to the diving bell and hyperbaric chamber, related diving equipment includes the following.

Diving chambers in use underwater

As well as transporting divers, a diving chamber carries tools and equipment, breathing gas cylinders to replenish[citation needed] scuba tanks, and communications and emergency equipment. It provides a temporary dry air environment during extended dives for rest, eating meals, carrying out tasks which can't be done underwater, and for emergencies. Diving chambers also act as an underwater base for surface supplied diving operations, with the divers' umbilicals (air supply, etc) attached to the diving chamber rather than to the diving support vessel.

Use of open diving bell type

Diving bells and open diving chambers of the same principle were more common in the past owing to their simplicity, since they do not necessarily need to monitor, control and mechanically adjust the internal pressure. Secondly since internal air pressure and external water pressure on the bell wall are almost balanced, the chamber does not have to be as strong as a pressurised diving chamber (dry bell). (Actually if h is the distance between a point on the side of the bell and the air/water interface at the bottom, the air pressure at that point is higher than the water on the other side by a water head pressure equivalent to h, but this is a small and constant amount, and is not a structural problem).

A wet diving bell or open diving chamber must be raised slowly to the surface with decompression stops appropriate to the dive profile so that the occupants can avoid decompression sickness. This may take hours, and so limits its use.

Use of hyperbaric chambers

Submersible hyperbaric chambers can be brought to the surface without delay to allow divers to decompress since they can maintain the same pressure at which the divers were working. The divers can stay in the chamber on the support vessel to decompress. This flexibility makes them safer to use and more useful in an accident or emergency, including problems affecting the dive support vessel, such as sudden bad weather. They are used to support saturation diving for which the decompression times are very long.

Hyperbaric lifeboats are specialized diving chambers or submersibles able to retrieve divers or occupants of diving chambers or underwater habitats in an emergency and to keep them in the required decompression phase. They have airlocks for underwater entry or to form a watertight seal with hatches on the target structure to effect a dry transfer of personnel. Rescuing occupants of submarines or submersibles with internal air pressure of one atmosphere requires being able to withstand the huge pressure differential to effect a dry transfer, and has the advantage of not requiring decompression measures on returning to the surface.

Diving chambers in use on land

Hyperbaric chambers designed only for use out of water do not have to resist inward crushing forces, only outward expansion forces. Those for medical applications typically only operate up to two or three atmospheres, while those for diving applications may have to go to six atmospheres and above.

Lightweight portable hyperbaric chambers which can be lifted by helicopter are used by commercial diving operators and rescue services to carry one or more divers requiring hospitalisation.

A decompression chamber is a pressure vessel used in surface supplied diving to allow the divers to complete their decompression stops at the end of a dive on the surface rather than underwater. This eliminates many of the risks of long decompressions underwater, in cold or dangerous conditions.

The decompression chamber was invented in 1916 by the Italian engineer Alberto Gianni.[1][2] 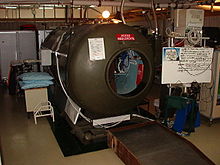 A recompression chamber is a pressure vessel used to treat divers suffering from certain diving disorders such as decompression sickness.[3]

A hyperbaric oxygen therapy chamber is used in a hospital or sporting context to treat patients whose condition might benefit from hyperbaric oxygen treatment, including divers. Hyperbaric chambers capable of admitting more than one patient (multiplace) and an inside attendant have advantages for the treatment of decompression sickness and are preferred by the U.S. Coast Guard. Divers with serious complications or injuries may be attended to in this manner during recompression. In addition, multiplace chambers are generally capable of greater depth of recompression, should the need arise. For less seriously ill divers, the more common monoplace chamber is often used. A modified treatment regimen is then used.