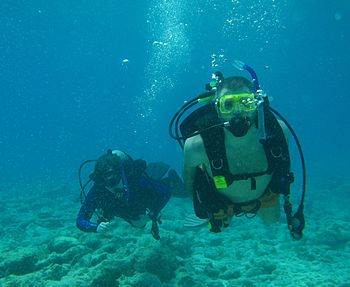 Recreational diving or sport diving is a type of diving that uses SCUBA equipment for the purpose of leisure and enjoyment. In some diving circles, the term "recreational diving" is used in contradistinction to "technical diving", a more demanding aspect of the sport which requires greater levels of training, experience and equipment.[nb 1][1]

Recreational scuba diving grew out of related activities such as Snorkeling and underwater hunting.[2] For a long time, recreational underwater excursions were limited by the amount of breath that could be held. However, the invention of the aqualung in 1943 by Jacques-Yves Cousteau and the wetsuit in 1953 by Georges Beuchat and its development over subsequent years led to a revolution in recreational diving.[2] However, for much of the 1950s and early 1960s, recreational scuba diving was a sport limited to those who were able to afford or make their own kit, and prepared to undergo intensive training to use it.

As the sport became more popular, manufacturers became aware of the potential market, and equipment began to appear that was easy to use, affordable and reliable. Continued advances in SCUBA technology, such as buoyancy compensators, modern diving regulators, wet or dry suits, and dive computers, increased the safety, comfort and convenience of the gear encouraging more people to train and use it.

Until the early 1950s, navies and other organizations performing professional diving were the only providers of diver training, but only for their own personnel and only using their own types of equipment. The first scuba diving school was created in France to train the owners of the Jacques Yves Cousteau and Emile Gagnan designed double hose scuba. The first school to teach the modern single hose scuba was started in 1953, in Melbourne, Australia, at the Melbourne City Baths. RAN Commander Batterham organized the school to assist the inventor of the single hose regulator, Ted Eldred. However, neither of these schools were international in nature.

There were no training courses, in the modern sense, available to civilians who bought the first scuba equipment. Some of the first training started in 1953 Trevor Hampton created the first British diving school, the British Underwater Centre and 1954 when Los Angeles County[3] created an Underwater Instructor Certification Course. Early instruction increased in the form of amateur teaching within a club environment, as exemplified by organizations such as the Scottish Sub-Aqua Club and the British Sub Aqua Club from 1953, Los Angeles County from 1954 and the YMCA from 1959.[4]

Professional instruction started in 1959 when the non-profit NAUI was formed,[5] which later effectively was split,[6] to form the for-profit PADI in 1966.[7] NASDS the National Association of Scuba Diving Schools started with their Dive Center based Training programs in 1962 followed by SSI in 1970.[8] PDIC professional diving instructors college was formed in 1965, later changing its name to PDIC professional diving instructors Corporation in 1984, providing training in a retail environment.[9]

Further developments in technology have reduced the cost of training and diving. Scuba-diving has become a popular leisure activity, and many diving locations have some form of dive shop presence that can offer air fills, equipment, and training.

In tropical and sub-tropical parts of the world,[11] there is a large market in 'holiday divers'; people who train and dive while on holiday, but rarely dive close to home.

Technical diving and use of rebreathers are increasing, particularly in areas of the world where deeper wreck diving is the main underwater attraction. Generally, recreational diving depths are limited to a maximum of between 30 and 40 meters (100 and 130 feet), beyond which a variety of safety issues make it unsafe to dive using recreation diving equipment and practices, and specialized training and equipment for technical diving are needed.

There are several recreational diving issues that are currently topics of discussion within the diving community. They include:

There is a certain amount of disquiet over the level of training and experience necessary to qualify as a diver. Under most entry-level programs (SEI, SDI, PADI, BSAC, SSAC, NAUI, SSI, and PDIC, divers can complete a certification with as few as four 'open water' dives. Such a qualification allows divers to rent equipment, receive air fills, and dive without any higher supervision to depth restrictions of typically 60 feet with a buddy. Critics claim that four dives is too few to prepare new divers for such a level of responsibility, and that either the total should be raised or the certification qualified. Certification agencies normally answer that they advise their students to dive within the envelope of their experience and training, and to seek to extend their training to Advanced Open Water, Enriched Air Nitrox, and beyond. In the 1980s, several agencies with DEMA collaborated to author ANSI Standard Z86.3 (1989), Minimum Course Content For Safe Scuba Diving which now serves to limit their potential liability from lawsuits on training adequacy issues by defining their training as the definition of Accepted Industry Practices.

Some divers see a split beginning to emerge in recreational diving between regular recreational divers, who often dive in their home communities, and leisure divers, characterized as those who dive occasionally, normally when abroad on holiday and in more benign conditions. It is sometimes observed that there is a tension between the two, and that leisure divers are often inexperienced, either under-trained or over-qualified, and sustain only a minimal empathy with the underwater world. The call is usually not that these divers be restrained from diving, but that they be encouraged to dive more regularly in their home communities so as to gain experience and support their local diving scene. However, as recreational diving has a very low accident and death rate, it is a commonly claimed view that current training requirements are adequate.

There are many diving activities which need further training than that provided by the initial courses:

Many diver training agencies such as ACUC, BSAC, CMAS, IANTD, NAUI, PADI, PDIC, SDI, SSI and YMCA offer training in these areas, as well as opportunities to move into professional instruction, technical diving, commercial diving and others.

Bodies of water for diving

Most bodies of water can be used as dive sites:

Many types of underwater feature make an interesting dive site, for example:

NASA image [1] showing locations of significant coral reefs, which are often sought out by divers for their abundant, diverse life forms.