Diving equipment is equipment used by underwater divers for the purpose of facilitating diving activities. This may be equipment primarily intended for this purpose, or equipment intended for other puprposes which is found to be suitable for diving use.

Equipment which is used for underwater work or other activities which is not directly related to the activity of diving, or which has not been designed or modified specifically for underwater use by divers is excluded.

The fundamental item of diving equipment used by divers is underwater breathing apparatus, such as scuba equipment, and surface supplied diving equipment, but there are other important pieces of equipment that make diving safer, more convenient or more efficient.

This is the diving equipment worn by or carried by the diver for personal protection or comfort, or to facilitate the diving aspect of the activity, and may include a selection from:

Equipment for dive monitoring and navigation

The purposes of this class of personal equipment are to:

Special equipment for underwater work not carried by the diver 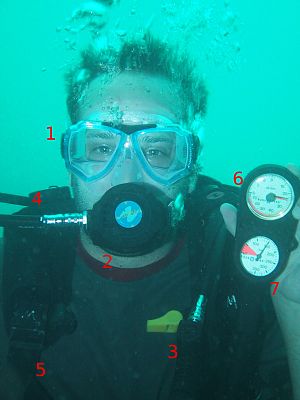 This picture shows some of the basic diving equipment and controls: