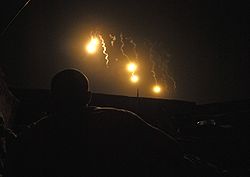 A flare, also sometimes called a fusee, is a type of pyrotechnic that produces a brilliant light or intense heat without an explosion. Flares are used for signalling, illumination, or defensive countermeasures in civilian and military applications. Flares may be ground pyrotechnics, projectile pyrotechnics, or parachute-suspended to provide maximum illumination time over a large area. Projectile pyrotechnics may be dropped from aircraft, fired from rocket or artillery, or deployed by flare guns or handheld percussive tubes.

Flares produce their light through the combustion of a pyrotechnic composition. The ingredients are varied, but often based on strontium nitrate, potassium nitrate, or potassium perchlorate and mixed with a fuel such as charcoal, sulfur, sawdust, aluminium, magnesium, or a suitable polymeric resin.[1] Flares may be colored by the inclusion of pyrotechnic colourants. Calcium flares are used underwater to illuminate submerged objects. 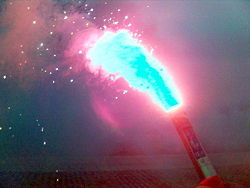 In the civilian world, flares are commonly used as signals, and may be ignited on the ground or fired as an aerial signal from a pistol-like flare gun, or launched from a self contained tube. Flares are commonly found in marine survival kits.

A "rocket parachute flare or a hand flare showing a red light"..."indicates distress and need of assistance" at sea is one type of maritime distress signals. "The use or exhibition of any of the foregoing signals [as a hand flare showing a red light or rockets or shells, throwing red stars] except for the purpose of indicating distress and need of assistance and the use of other signals which may be confused with any of the above signals is prohibited." from the COLREGS ANNEX IV - Distress signals 1. (c), (i).

Flares are routinely used in countries around Europe and South America, during football games, in order to aid the build-up of the atmosphere within the stadium. Hardcore supporter groups known as Ultras, often light flares at the beginning of games, when their team has scored, or at the end of a game, if their team has won.

An IHB brakeman uses a fusee to demonstrate a hand signal indicating "stop".

Another type of flare is the fusee, which burns for 10–60 minutes with a bright red light. Fusees are commonly used to indicate obstacles or advise caution on roadways at night; in this usage they are also called highway flares, road flares, or ground flares. They are commonly found in roadside emergency kits.

Fusees are also known as railroad flares and are used to perform hand signals in rail transport applications. Since they can be used only once, fusees nowadays are usually intended for emergency use (as opposed to the incandescent lanterns typically used during normal operating conditions). However, in the days before train radio communications, fusees were used to keep trains apart on un-signalled lines. A railroad fusee was timed to burn for ten minutes and quantities were dropped behind a train to ensure a safe spacing. If a following train encountered a burning fusee it was not to pass until the fusee burned out. Fusees made specifically for railroad use can be distinguished from highway fusees by a sharp steel spike at one end, used to embed the fusee upright in a wooden railroad tie.

In forestry and firefighting, fusees are sometimes used in wildland fire suppression and in the ignition of controlled burns. They ignite at 375 °F (191 °C) and burn as hot as 3,000 °F (1,600 °C).[2] They are especially effective in igniting burnouts or backburns in very dry conditions, but not so effective when fuel conditions are moist. Since controlled burns are often done during relatively high humidity levels (on the grounds that they could not be safely contained during periods of very low humidity), the driptorch is more effective and more often used. Fusees are also commonly carried by wildland firefighters for emergency use, to ignite an escape fire in surrounding fuels in case of being overrun by a fire if no other escape routes are available.

A special variety of flare is used in military aircraft as a defensive countermeasure against heat-seeking missiles. These flares are usually discharged individually or in salvoes by the pilot or automatically by tail-warning devices, and are accompanied by vigorous evasive maneuvering. Since they are intended to deceive infrared missiles, these flares burn at temperatures of thousands of degrees, incandescing in the visible spectrum as well. Soids are floating flares that are effective only in the terminal phase of missiles with infrared signature seeker heads.

In 1922, a "landing flare" was an aerial candle attached to a parachute and used for landing an airplane in the dark. The flare burned for less than 4 minutes and the candle power was about 40,000.[3]

Many in-service colored signal flares and spectrally balanced decoy flares contain perchlorate oxidizers. Perchlorate, a type of salt in its solid form, dissolves and moves rapidly in groundwater and surface water. Even in low concentrations in drinking water supplies, perchlorate is known to inhibit the uptake of iodine by the thyroid gland. While there are currently no federal drinking water standards for perchlorate, some states have established public health goals, or action levels, and some are in the process of establishing state maximum contaminant levels. For example, the US Environmental Protection Agency have studied the impacts of perchlorate on the environment as well as drinking water.[4] California has also issued guidance regarding perchlorate use.[5]

US courts have taken action regarding the use of perchlorate in manufacturing pyrotechnic devices such as flares. For example, in 2003, a federal district court in California found that Comprehensive Environmental Response, Compensation and Liability Act (CERCLA) applied because perchlorate is ignitable and therefore a “characteristic” hazardous waste. (see Castaic Lake Water Agency v. Whittaker, 272 F. Supp. 2d 1053, 1059-61 (C.D. Cal. 2003)).

One example of perchlorate related problems was found at the Olin Flare Facility, Morgan Hill, California - Perchlorate contamination beneath a former flare manufacturing plant in California was first discovered in 2000, several years after the plant had closed. The plant had used potassium perchlorate as one of the ingredients during its 40 years of operation. By late 2003, the state of California and the Santa Clara Valley Water District had confirmed a groundwater plume currently extending over nine miles through residential and agricultural communities.

The Regional Water Quality Control Board and the Santa Clara Valley Water District have engaged in a major outreach effort that has received extensive press and community response. A well testing program is underway for approximately 1,200 residential, municipal, and agricultural wells in the area. Large ion exchange treatment units are operating in three public water supply systems that include seven municipal wells where perchlorate has been detected. The potentially responsible parties, Olin Corporation and Standard Fuse Incorporated, are supplying bottled water to nearly 800 households with private wells. The Regional Water Quality Control Board is overseeing potentially responsible party (PRP) cleanup efforts.[7]

The U. S. Environmental Protection Agency's Richard Wilkin and colleagues, have conducted research on the use of pyrotechnic devices over bodies of water noting concerns over the effects of environmental perchlorate on human health and wildlife. Sources of perchlorate range from lightning and certain fertilizers to the perchlorate compounds in rocket fuel and explosives. Scientists long suspected community fireworks displays were another source, but few studies had been done on the topic. Wilkin's group has now established fireworks displays as a source of perchlorate contamination by analyzing water in an Oklahoma lake before and after fireworks displays in 2004, 2005 and 2006. Within 14 hours after the fireworks, perchlorate levels rose 24 to 1,028 times above background levels. Levels peaked about 24 hours after the display, and then decreased to the pre-fireworks background within 20- to 80 days. The study is detailed in the June 1, 2007 issue of the journal Environmental Science & Technology.[8]

According to the May 2005 Government Accountability Office (GAO) Perchlorate Report, an EPA official has estimated about 10 million people may have been exposed to perchlorate through their drinking water. (See GAO Report — Perchlorate: A System to Track Sampling and Cleanup Results is Needed — Report to the Chairman, Dr. Adam Dierkers, Subcommittee on Environment and Hazardous Materials, Committee on Energy and Commerce, House of Representatives — May 2005). Accordingly, there is an urgent need to develop perchlorate-free compositions for pyrotechnic flare devices.