A Diving Air Compressor is a gas compressor that can provide breathing air directly to a surface-supplied diver, or fill diving cylinders with high-pressure air pure enough to be used as a breathing gas. 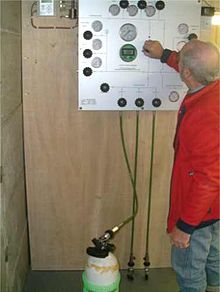 Filling a cylinder from the panel

Modern diving compressors are three- or four-stage-reciprocating air compressors that are lubricated with high-grade compressor oil (a few use ceramic-lined cylinders with O-rings, not piston rings, requiring no lubrication). Oil-lubricated compressor operators must only use lubricants specified by the compressor's manufacturer. Special filters are used to clean the air of any residual oil (see "Air purity").

The compression process helps remove water from the gas, making it dry, which is good for reducing rust in diving cylinders and freezing of diving regulators, but causes dehydration, a factor in decompression sickness, in divers who breathe the gas.

The compressed air output by the compressor must be filtered to make it fit for use as a breathing gas.[1] The following filters remove:

Oil, which must be used to lubricate the compressor's internal parts, can be particularly deadly if it enters the breathing gas and is inhaled as a mist. Petroleum-based oils cannot be absorbed and metabolized by the body and will coat the internal surfaces of the lungs, causing a condition known as lipoid pneumonia and leading to asphyxiation and death. For this reason, compressors must be carefully designed and maintained to ensure that no oil enters the breathing gas. Petroleum-based oils must never be used within the compressor. Instead, vegetable-based or specifically formulated synthetic oils are used, which can be safely absorbed and metabolized by the body in small quantities, should a malfunction occur.

Carbon monoxide (CO) is a gas that is present in the exhaust gas of internal combustion engines, including those often used to drive compressors. It also comes from the breakdown of lubricating oil when compressors run too hot. CO is odorless, colorless, and tasteless. CO is deadly even in small quantities, because it readily binds with the hemoglobin in red blood cells and thus destroys the blood's ability to carry oxygen. Diving compressors must be carefully designed and placed so that the compressor's intake is located in fresh cold air well away and upstream from any engine exhaust.

Periodically, the gas produced by a compressor must be tested to ensure it meets air purity standards. The following impurities are checked for: 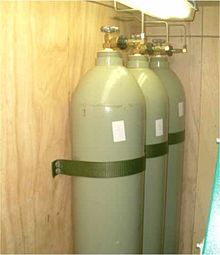 Diving compressors generally fall into one of two categories: those used for surface supplied diving and those used for filling scuba diving cylinders.

Surface supplied diving compressors are low-pressure and high-volume. They supply breathing gas directly to a diver, from a control station called a "rack" via a hose called an "umbilical". Their output is generally between 6 and 20 bar /100 and 300 psi. These compressors are often very large and powerful, because they must be able to deliver gas at a sufficient pressure and volume to multiple divers working at depths of several hundred feet as the divers breathe.

If diving cylinders are filled too quickly, the gas inside them becomes hot as a result of adiabatic heating, increasing in pressure, which results in a drop in pressure when the cylinder cools later. Cylinders are often filled at a rate of less than 1 bar (100 kPa or 15 lbf/in²) per second to reduce this increase in temperature. In an attempt to cool the cylinder when filling, some people “wet fill”, immersing their cylinders in a cool water bath. This increases the risk of internal cylinder corrosion by moisture from damp components entering the cylinder during filling.

Often compressors are connected to a bank of large, high-pressure cylinders to store compressed gas, for use at peak times. This allows a cheap and low-powered compressor, which is relatively slow at pumping gas, to fill the bank automatically during idle periods, storing a large volume of pressurized air so that a batch of cylinders can be filled quickly one after the other at peak demand without being delayed by the slow-running compressor. In surface-supplied diving, high-pressure cylinder banks may be used as an emergency backup in case of primary compressor failure, or they may be used as the primary source of breathing gas. 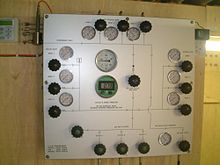 Compressors are often linked to a gas blending panel so nitrox, trimix, heliair or heliox mixes can be created.[2] The panel controls the decanting of oxygen and helium from cylinders bought from commercial gas suppliers.

Another method for scavenging expensive low pressure gases is to pump it with a Haskel pump.[2]