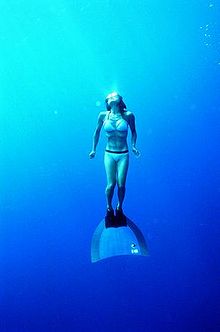 Freediving is any of various aquatic activities that share the practice of breath-hold underwater diving. Examples include breathhold spear fishing, freedive photography, apnea competitions and, to a degree, snorkeling. The activity that garners the most public attention is competitive apnea, an extreme sport, in which competitors attempt to attain great depths, times or distances on a single breath without the assistance of self-contained underwater breathing apparatus (scuba).

Competitive freediving is currently governed by two world associations: AIDA International (International Association for Development of Apnea) and CMAS (World Underwater Federation). Most types of competitive freediving have in common that it is an individual sport based on the best individual achievement. An exception to this rule is the bi-annual World Championship for Teams, held by AIDA, where the combined score of the team members makes up the team's total points. There are currently nine disciplines used by official governing bodies and a dozen disciplines that are only practiced locally. In this article, the recognized disciplines of AIDA and CMAS will be described. All disciplines can be done by both men and women and, while done outdoors, no differences in the environment between records are recognized any longer. The disciplines of AIDA can be done both in competition and as a record attempt, with the exception of Variable Weight and No limits, which are both done solely as record attempts.

The following official disciplines are recognized by AIDA, CMAS, or both.

For all AIDA disciplines, the depth the athlete will attempt is announced before the dive. This is accepted practice for both competitions and record attempts.

Each organization has its own rules on recognizing an attempt. These can be found on the website from the respective organizations.

Freediving is also a recreational sport, celebrated as a relaxing, liberating, and unique experience. Many snorkelers may technically be freediving if they perform any sort of breath-hold diving - it is important to stress the importance of training and supervision when making this association.

The human body has several adaptations under diving conditions,[1][2] which stem from the mammalian diving reflex. These adaptations enable the human body to endure depth and lack of oxygen far beyond what would be possible without the reflex.

The adaptations made by the human body while underwater and at high pressure include:[1][2]

Training for free-diving can take many forms and be done on the land.

One example is the apnea walk. This consists of a preparation "breathe-up", followed by a short (typically 1 minute) breath hold taken at rest. Without breaking the hold, the participant then initiates a walk for as far as they can, until it becomes necessary to breathe again. Athletes can do close to 400 meters in training this way.

This form of training is good for accustoming muscles to work under anaerobic conditions, and for tolerance to CO2 build-up in the circulation. It is also easy to gauge progress, as increasing distance can be measured.

Before competition attempt, free-divers perform preparation sequence, which usually consists of physical stretching, mental exercise and breath exercise. It may include sequention of variable length static apnea, special purging deep breaths, hyperventilation. Result of preparation sequence is slower metabolism, lower heart rate and breath rate, lower level of CO2 in bloodstream[3] and, last but not least, overall mental equilibrium. Failing ordinary warning signals or crossing mental barrier by strong will may lead to shallow water blackout or deep water blackout.[2][4] Trained free-divers are well aware of this and will only dive under strict and first aid competent supervision. However this does not, of itself, eliminate the risk of deep or shallow water blackout. All safe free-divers have a 'buddy' who accompanies them, observing from within the water at the surface. Due to the nature of the sport, any practice of free-diving must include strict adherence to safety measures as an integral part of the activity, and all participants must also be adept in rescue and resuscitation. Without proper training and supervision, free-diving/apnea/breath-hold diving is extremely dangerous.

Archaeological evidence suggests that people have been freediving since the 5th century BCE. The first known were the haenyeo in Korea who collected shells and sponges to sell to others. The Ama Divers from Japan began to collect pearls 2,000 years ago.[4][5] Both Plato and Homer mention the sponge as being used for bathing in ancient Greece and this may represent an early reference to commercial free-diving to obtain them; the island of Kalymnos was a main centre of diving for sponges. By using weights of as much as 15 kilograms (33 lb) to speed the descent, breath-holding divers would descend to depths up to 30 metres (98 ft) for as long as 5 minutes to collect sponges.[6]

Spearfishing around the Mediterranean Sea was important for the historical background for the movement of the apnea sport.