Hypothermia (from Greek υποθερμία) is a condition in which core temperature drops below the required temperature for normal metabolism and body functions which is defined as 35.0 °C (95.0 °F). Body temperature is usually maintained near a constant level of 36.5–37.5 °C (98–100 °F) through biologic homeostasis or thermoregulation. If exposed to cold and the internal mechanisms are unable to replenish the heat that is being lost, a drop in core temperature occurs. As body temperature decreases, characteristic symptoms occur such as shivering and mental confusion.

Hypothermia is the opposite of hyperthermia which is present in heat exhaustion and heat stroke. One of the lowest documented body temperature from which anyone has recovered was 13.0 °C (55.4 °F), in a drowning incident involving a 7-year-old girl in Sweden in December 2010.[1]

Other cold-related injuries that can either be present alone or in combination with hypothermia include:

The signs and symptoms vary depending on the degree of hypothermia and may be divided by the three stages of severity.

Symptoms of mild hypothermia may be vague[13] with sympathetic nervous system excitation (shivering, hypertension, tachycardia, tachypnea, and vasoconstriction). These are all physiological responses to preserve heat.[14] Cold diuresis, mental confusion, as well as hepatic dysfunction may also be present.[15] Hyperglycemia may be present, as glucose consumption by cells and insulin secretion both decrease, and tissue sensitivity to insulin may be blunted.[16] Sympathetic activation also releases glucose from the liver. In many cases, however, especially in alcoholic patients, hypoglycemia appears to be a more common presentation.[16] Hypoglycemia is also found in many hypothermic patients because hypothermia often is a result of hypoglycemia.[17]

As the temperature decreases further physiological systems falter and heart rate, respiratory rate, and blood pressure all decreases. This results in an expected HR in the 30s with a temperature of 28 °C (82 °F).[15]

Twenty to fifty percent of hypothermia deaths are associated with paradoxical undressing. This typically occurs during moderate to severe hypothermia, as the person becomes disoriented, confused, and combative. They may begin discarding their clothing, which, in turn, increases the rate of heat loss.[21][22]

Rescuers who are trained in mountain survival techniques are taught to expect this; however, some may assume incorrectly that urban victims of hypothermia have been subjected to a sexual assault.[23]

One explanation for the effect is a cold-induced malfunction of the hypothalamus, the part of the brain that regulates body temperature. Another explanation is that the muscles contracting peripheral blood vessels become exhausted (known as a loss of vasomotor tone) and relax, leading to a sudden surge of blood (and heat) to the extremities, fooling the person into feeling overheated.[23]

In the final stages of hypothermia, the brain stem produces a burrowing-like behavior. Similar to hibernation behavior in animals, individuals with severe hypothermia are often found in small, enclosed spaces, such as under the bed or behind wardrobes.[24] 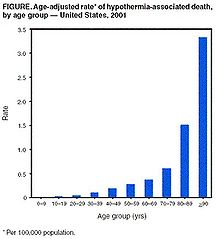 The rate of hypothermia is strongly related to age in the United States.

Hypothermia usually occurs from exposure to low temperatures, and is frequently complicated by alcohol. Any condition that decreases heat production, increases heat loss, or impairs thermoregulation, however, may contribute.[25] Thus, hypothermia risk factors include: any condition that affects judgment (hypoglycemia), the extremes of age, poor clothing, chronic medical conditions (such as hypothyroidism and sepsis), substance abuse, homelessness, and living in a cold environment.[26][27] Hypothermia also occurs frequently in major trauma. Hypothermia also is observed in severe cases of anorexia nervosa.

Alcohol consumption increases the risk of hypothermia via its action as a vasodilator. It increases blood flow to the body's skin and extremities, making a person feel warm, while increasing heat loss.[28] Between 33 to 73% of cases of hypothermia are complicated by alcohol.[29][30]

Hypothermia continues to be a major limitation to diving in cold water.[18] The limitation of finger dexterity due to pain or numbness decreases general safety and work capacity, which consequently increases the risk of other injuries.[18][20] Due to the use of gas mixtures containing helium at extreme depths, the use of argon inflation for dry suits, or hot water suits become a necessity for diving deep in colder waters.

Heat is primarily generated in muscle tissue, including the heart, and in the liver, while it is lost through the skin (90%) and lungs (10%).[13] Heat production may be increased 2 to 4 fold through muscle contractions ( i.e. exercise and shivering ).[13] Rates of bodily heat loss are determined, as with any object, by convection, conduction, and radiation.[13] The rates of these can be affected by clothing and other environmental conditions.

Many changes to physiology occur as body temperature decreases. These occur in the cardiovascular system leading to the Osborn J wave and other dysrhythmias, decreased CNS electrical activity, cold diuresis, and non-cardiogenic pulmonary edema.[33]

Atrial fibrillation and Osborn J waves in a person with hypothermia. Note what could be mistaken for ST elevation.

Accurate determination of core temperature often requires a special low temperature thermometer, as most clinical thermometers do not measure accurately below 34.4°C (94°F).[14] A low temperature thermometer can be placed rectally, esophageally, or in the bladder. The classical ECG finding of hypothermia is the Osborn J wave. Also, ventricular fibrillation frequently occurs at <28°C (82.4°F) and asystole at <20°C (68°F).[13] The Osborn J may look very similar to those of an acute ST elevation myocardial infarction.[15] Thrombolysis as a reaction to the presence of Osborn J waves is not indicated, as it would only worsen the underlying coagulopathy caused by hypothermia.

As a hypothermic person's heart rate may be very slow, prolonged palpation could be required before detecting a pulse. In 2005 American Heart Association recommended at least 30 – 45 seconds to verify the absence of a pulse before initiating CPR.[34]

Most physicians are recommended not to declare a patient dead until their body is warmed to a normal body temperature, since extreme hypothermia can suppress heart and brain function.[35]

Appropriate clothing helps to prevent hypothermia. Synthetic and wool fabrics are superior to cotton as they provide better insulation when wet and dry. Some synthetic fabrics, such as polypropylene and polyester, are used in clothing designed to wick perspiration away from the body, such as liner socks and moisture-wicking undergarments.

The United States Coast Guard promotes using life vests as a method of protection against hypothermia through the 50/50/50 rule: If someone is in 50 °F (10 °C) water for 50 minutes, he/she has a 50 percent better chance of survival if wearing a life jacket.[citation needed][36] A heat escape lessening position can be used to increase survival in cold water.

Aggressiveness of treatment is matched to the degree of hypothermia. Treatment ranges from noninvasive, passive external warming, to active external rewarming, to active core rewarming.[14] In severe cases resuscitation begins with simultaneous removal from the cold environment and concurrent management of the airway, breathing, and circulation. Rapid rewarming is then commenced. A minimum of patient movement is recommended as aggressive handling may increase risks of a dysrhythmia.[34]

Hypoglycemia is a frequent complication of hypothermia, and therefore needs to be tested for and treated. Intravenous thiamine and glucose is often recommended as many causes of hypothermia are complicated by Wernicke's encephalopathy.[37]

As most people are moderately dehydrated due to hypothermia induced cold diuresis, intravenous fluids are often helpful ( 250–500 cc 5% dextrose and normal saline warmed to a temperature of 40–45 C is often recommended ).[14]

Rewarming collapse (or rewarming shock) is a sudden drop in blood pressure in combination with a low cardiac output which may occur during active treatment of a severely hypothermic person.[41][42] There is theoretical concern that external rewarming rather than internal rewarming may increase the risk. However, recent studies have not supported these concerns.[34]

There is considerable evidence that children who suffer near-drowning accidents in water near 0°C (32°F) can be revived over an hour after losing consciousness.[43] The cold water lowers metabolism, allowing the brain to withstand a much longer period of hypoxia. While survival is possible, mortality from severe or profound hypothermia remains high despite optimal treatment. Studies estimate mortality at between 38%[44][45] – 75%.[13] If there are obvious fatal injuries or the chest is too frozen, compression resuscitation is futile.[34]

In the past hypothermia occurred most frequently in homeless people, but recreational exposure to cold environments is now the main cause of hypothermia. Between 1995 and 2004 in the United States an average of 1560 cold-related emergency department visits occurred per year and in the years 1999 to 2004 an average of 647 people died per year due to hypothermia.[26][46]

The armies of Napoleon retreat from Russia in 1812.

"Snow-storm: Hannibal and his Army Crossing the Alps", J.M.W. Turner

Hypothermia has played a major role in the success or failure of many military campaigns from Hannibal's loss of nearly half his men in 218 B.C. to the near destruction of Napoleon's armies in Russia in 1812. Loss of life to hypothermia continued through the first and second world wars, especially in the Battle of Stalingrad.[47] Civilian examples of deaths caused by hypothermia are found during the sinkings of the RMS Titanic and RMS Lusitania.[48][49]

Many animals other than humans often induce hypothermia during hibernation or torpor.

Water bears (Tardigrade), microscopic multicellular organisms, can survive freezing at low temperatures by replacing most of their internal water with the sugar trehalose, preventing it from crystallization that otherwise damage cell membranes.