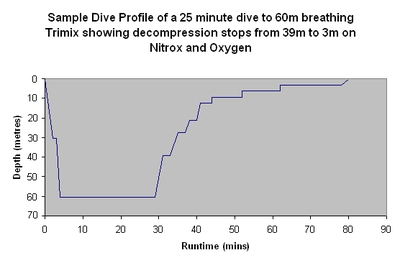 Decompression is the act of making many stops during an ascent from depth to allow the dissolved gases, from the breathing gas, to leave the tissues of the body. If a graph of depth/time is plotted, the result is what is known as the decompression curve - it is the profile the diver must follow in order to release the dissolved gas from their body slowly.

Decompression is a mechanism of gas removal from tissues. This is achieved by setting up a "gradient" between the dissolved gas, and the breathing gas as well as the current depth.

At the surface they body is in equilibrium with the atmosphere (assume only Nitrogen and Oxygen), and the partial pressures of these gases would be 0.8bar and 0.2bar respectively, both inside and outside the body.

Suppose a SCUBA Diver made a dive using air and they descended to 10msw (33 fsw) and stayed there, they would on-gas. This is because the partial pressure of the gases in their body is different to the partial pressure of the gases they are breathing. At 10msw the diver is breathing a gas at 2bar (O2 = 20% and N2 = 80% would result in a ppO2 = 0.4bar and ppN2 = 1.60bar.)

As stated, the divers' tissues are at a different partial pressure, therefore applying diffusion laws, the gases will try to equalise. Hence the tissues will "load" with gas

Terminology associated with the decompression curve

Steep If the decompression curve has a steep gradient, we can say that the diver is aggressive because they are forcing dissolved gas out of their tissues. There is a maximum rate of removal before the benefit is minimised by the risk of decompression sickness, or the bends.