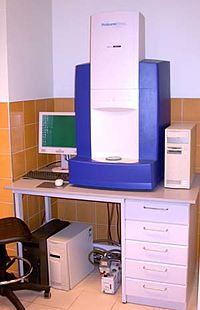 Matrix-assisted laser desorption/ionization (MALDI) is a soft ionization technique used in mass spectrometry, allowing the analysis of biomolecules (biopolymers such as DNA, proteins, peptides and sugars) and large organic molecules (such as polymers, dendrimers and other macromolecules), which tend to be fragile and fragment when ionized by more conventional ionization methods. It is similar in character to electrospray ionization both in relative softness and the ions produced (although it causes many fewer multiply charged ions).

The MALDI is a two step process. First, desorption is triggered by a UV laser beam. Matrix material heavily absorbs UV laser light, leading to the ablation of upper layer (~micron) of the matrix material. A hot plume produced during the ablation contains many species : neutral and ionized matrix molecules, protonated and deprotonated matrix molecules, matrix clusters and nanodroplets. The second step is ionization (more accurately protonation or deprotonation). Protonation (deprotonation) of analyte molecules takes place in the hot plume. Some of the ablated species participate in protonation (deprotonation) of analyte molecules. The mechanism of MALDI is still debated.

The matrix consists of crystallized molecules, of which the three most commonly used are 3,5-dimethoxy-4-hydroxycinnamic acid (sinapinic acid), α-cyano-4-hydroxycinnamic acid (alpha-cyano or alpha-matrix) and 2,5-dihydroxybenzoic acid (DHB). A solution of one of these molecules is made, often in a mixture of highly purified water and an organic solvent (normally acetonitrile (ACN) or ethanol). Trifluoroacetic acid (TFA) may also be added. A good example of a matrix-solution would be 20 mg/mL sinapinic acid in ACN:water:TFA (50:50:0.1). 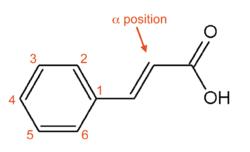 The identification of suitable matrix compounds is determined to some extent by trial and error, but they are based on some specific molecular design considerations:

The matrix solution is mixed with the analyte (e.g. protein-sample). A mixture of water and organic solvent allows both hydrophobic and water-soluble (hydrophilic) molecules to dissolve into the solution. This solution is spotted onto a MALDI plate (usually a metal plate designed for this purpose). The solvents vaporize, leaving only the recrystallized matrix, but now with analyte molecules embedded into MALDI crystals. The matrix and the analyte are said to be co-crystallized. Co-crystallization is a key issue in selecting proper matrix to obtain good quality mass spectrum of analyte of interest.

MALDI techniques typically employ the use of UV lasers such as nitrogen lasers (337 nm) and frequency-tripled and quadrupled Nd:YAG lasers (355 nm and 266 nm respectively). Although not as common, infrared lasers are used due to their softer mode of ionization. IR-MALDI also has the advantage of greater material removal (useful for biological samples), less low-mass interferences, and compatibility with other matrix-free laser desorption mass spectrometry methods.[9]

The laser is fired at the matrix crystals in the dried-droplet spot. The matrix absorbs the laser energy and it is thought that primarily the matrix is desorbed and ionized (by addition of a proton) by this event. The matrix is then thought to transfer proton to the analyte molecules (e.g., protein molecules), thus charging the analyte.[10] Ions observed after this process consist of a neutral molecule [M] and an added or removed ion. Together, they form a quasimolecular ion, for example [M+H]+ in the case of an added proton, [M+Na]+ in the case of an added sodium ion, or [M-H]- in the case of a removed proton. MALDI is capable of creating singly charged ions, but multiply charged ions ([M+nH]n+) can also be created, as a function of the matrix, the laser intensity and/or the voltage used. Note that these are all even-electron species. Ion signals of radical cations (photoionized molecules) can be observed, e.g., in case of matrix molecules and other organic molecules.

Atmospheric pressure (AP) matrix-assisted laser desorption/ionization (MALDI) is an ionization technique (ion source) that in contrast to vacuum MALDI operates at normal atmospheric environment.[11] The main difference between vacuum MALDI and AP-MALDI is the pressure in which the ions are created. In vacuum MALDI, ions are typically produced at 10 mTorr or less while in AP-MALDI ions are formed in atmospheric pressure. In the past the main disadvantage of AP MALDI technique compared to the conventional vacuum MALDI has been its limited sensitivity. With the introduction of AP MALDI Pulsed Dynamic Focusing (PDF) by MassTech, Inc. (Columbia, MD, USA) in 2004, ions are transferred into the mass spectrometer with high efficiency and attomole quantities of peptides has been reported in the peer-reviewed literature.[12]

The AP-MALDI ion source is easily coupled to an ion trap mass spectrometer[13] or any other MS system equipped with ESI (electrospray ionization) or nanoESI source. 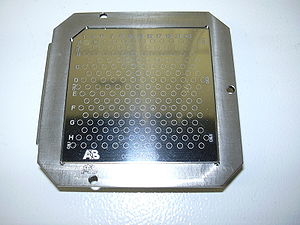 The type of a mass spectrometer most widely used with MALDI is the TOF (time-of-flight mass spectrometer), mainly due to its large mass range. The TOF measurement procedure is also ideally suited to the MALDI ionization process since the pulsed laser takes individual 'shots' rather than working in continuous operation. MALDI-TOF instrument or reflectron is equipped with an "ion mirror" that reflects ions using an electric field, thereby doubling the ion flight path and increasing the resolution. Today, commercial reflectron TOF instruments reach a resolving power m/Δm of well above 20'000 FWHM (full-width half-maximum, Δm defined as the peak width at 50% of peak height).

MALDI-FT-ICR MS has been demonstrated to be a useful technique where high resolution MALDI-MS measurements are desired.[15]

The term matrix-assisted laser desorption ionization (MALDI) was coined in 1985 by Franz Hillenkamp, Michael Karas and their colleagues.[16] These researchers found that the amino acid alanine could be ionized more easily if it was mixed with the amino acid tryptophan and irradiated with a pulsed 266 nm laser. The tryptophan was absorbing the laser energy and helping to ionize the non-absorbing alanine. Peptides up to the 2843 Da peptide melittin could be ionized when mixed with this kind of “matrix”.[17] The breakthrough for large molecule laser desorption ionization came in 1987 when Koichi Tanaka of Shimadzu Corp. and his co-workers used what they called the “ultra fine metal plus liquid matrix method” that combined 30 nm cobalt particles in glycerol with a 337 nm nitrogen laser for ionization.[18] Using this laser and matrix combination, Tanaka was able to ionize biomolecules as large as the 34,472 Da protein carboxypeptidase-A. Tanaka received one-quarter of the 2002 Nobel Prize in Chemistry for demonstrating that, with the proper combination of laser wavelength and matrix, a protein can be ionized.[19] Karas and Hillenkamp were subsequently able to ionize the 67 kDa protein albumin using a nicotinic acid matrix and a 266 nm laser.[20] Further improvements were realized through the use of a 355 nm laser and the cinnamic acid derivatives ferulic acid, caffeic acid and sinapinic acid as the matrix.[2] The availability of small and relatively inexpensive nitrogen lasers operating at 337 nm wavelength and the first commercial instruments introduced in the early 1990s brought MALDI to an increasing number of researchers.[21] Today, mostly organic matrices are used for MALDI mass spectrometry.

Some synthetic macromolecules, such as catenanes and rotaxanes, dendrimers and hyperbranched polymers, and other assemblies, have molecular weights extending into the thousands or tens of thousands, where most ionization techniques have difficulty producing molecular ions. MALDI is a simple and fast analytical method that can allow chemists to rapidly analyze the results of such syntheses and verify their results.

In polymer chemistry MALDI can be used to determine the molar mass distribution.[29] Polymers with polydispersity greater than 1.2 are difficult to characterize with MALDI due to the signal intensity discrimination against higher mass oligomers.[30][31][32] A good matrix for polymers is dithranol and AgTFA. The sample must first be mixed with dithranol and the AgTFA added afterwards; otherwise the sample would precipitate out of solution.

MALDI/TOF spectra are used for the identification of microorganisms such as bacteria or fungi. A colony of the microbe in question is smeared directly on the sample target and overlayed with matrix. The mass spectra generated are analyzed by dedicated software and compared with stored profiles. Species diagnosis by this procedure is much faster, more accurate and cheaper than other procedures based on immunological or biochemical tests. MALDI/TOF may become the standard method for species identification in medical microbiological laboratories over the next few years.[33]

The sample preparation for MALDI is important for both sensitivity, reproducibility, and quantification of mass analysis. Inorganic salts which are also part of protein extracts interfere with the ionization process. The salts can be removed by solid phase extraction or by washing the dried-droplet MALDI spots with cold water. Both methods can also remove other substances from the sample. The matrix-protein mixture is not homogenous because the polarity difference leads to a separation of the two substances during co-crystallization. The spot diameter of the target is much larger than that of the laser, which makes it necessary to make many laser shots at different places of the target, to get the statistical average of the substance concentration within the target spot. The matrix chemical composition, the addition of trifluoroacetic acid, formic acid, fructose, delay time between the end of laser pulse and start of ion acceleration in the ion source (in vacuum MALDI sources), laser wavelength, UV energy (as well as its density and homogeneity)in a focused light spot produced by pulsed laser, and the impact angle of the laser on the target are among critical parameters for the quality and reproducibility of the MALDI-TOF MS method.