The piriformis (from Latin piriformis = "pear shaped") is a muscle in the gluteal region of the lower limb. It was first named by Spigelius, a professor from the University of Padua in the 16th century.[1]

It originates from the anterior (front) part of the sacrum, the part of the spine in the gluteal region, and from the superior margin of the greater sciatic notch (as well as the sacroiliac joint capsule and the sacrotuberous ligament). It exits the pelvis through the greater sciatic foramen to insert on the greater trochanter of the femur. Its tendon often joins with the tendons of the superior gemellus, inferior gemellus, and obturator internus muscles prior to insertion.

The piriformis is a flat muscle, pyramidal in shape, lying almost parallel with the posterior margin of the gluteus medius.

It is situated partly within the pelvis against its posterior wall, and partly at the back of the hip-joint.

It arises from the front of the sacrum by three fleshy digitations, attached to the portions of bone between the first, second, third, and fourth anterior sacral foramina, and to the grooves leading from the foramina: a few fibers also arise from the margin of the greater sciatic foramen, and from the anterior surface of the sacrotuberous ligament.

The muscle passes out of the pelvis through the greater sciatic foramen, the upper part of which it fills, and is inserted by a rounded tendon into the upper border of the greater trochanter behind, but often partly blended with, the common tendon of the obturator internus and superior and inferior gemellus muscles.

The piriformis muscle is part of the lateral rotators of the hip, along with the quadratus femoris, gemellus inferior, gemellus superior, obturator externus, and obturator internus. The piriformis laterally rotates the extended thigh and abducts the flexed thigh. Abduction of the flexed thigh is important in the action of walking because it shifts the body weight to the opposite side of the foot being lifted, which keeps us from falling. The action of the lateral rotators can be understood by crossing your legs to rest an ankle on the knee of the other leg. This causes the femur to rotate and point the knee laterally. The lateral rotators also oppose medial rotation by the gluteus medius and gluteus minimus. 'At a range of more than 90 degrees the actions of the piriformis are reversed to adduct and internally rotate (medial).'

It may be united with the gluteus medius, send fibers to the gluteus minimus, or receive fibers from the superior gemellus.

It may have one or two sacral attachments; or it may be inserted in to the capsule of the hip joint.

This syndrome occurs when the piriformis irritates the sciatic nerve, which comes into the gluteal region beneath the muscle, causing pain in the buttocks and referred pain along the sciatic nerve.[2] This referred pain is known as sciatica. Fifteen percent of the population has their sciatic nerve coursing through the piriformis muscle. This subgroup of the population is predisposed to developing sciatica. Sciatica can be described by pain, tingling, or numbness deep in the buttocks and along the sciatic nerve. Sitting down, stretching, climbing stairs, and performing squats usually increases pain. Diagnosing the syndrome is usually based on symptoms and on the physical exam. More testing, including MRIs, X-rays, and nerve conduction tests can be administered to exclude other possible diseases.[2] If diagnosed with piriformis syndrome, the first treatment involves progressive stretching exercises and physical treatment. Corticosteroids can be injected into the piriformis muscle if pain continues. A more invasive, but sometimes necessary treatment involves surgical exploration as a last resort.[2] 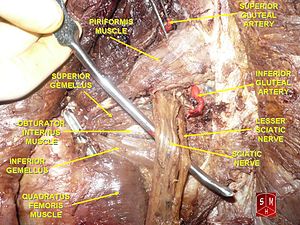