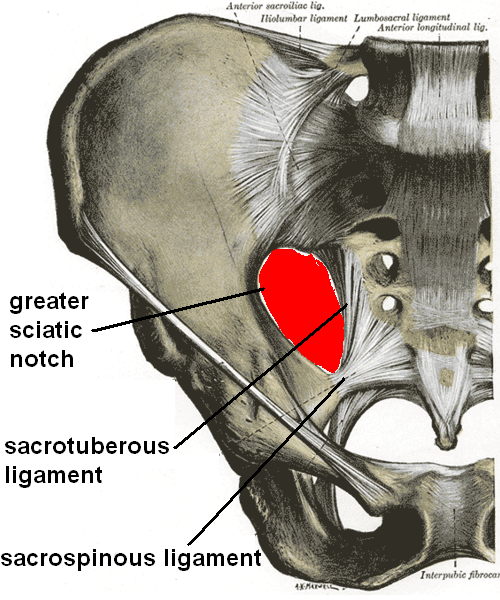 Caption = Articulations of pelvis, anterior view, with greater sciatic foramen (labeled in red) and its boundaries. 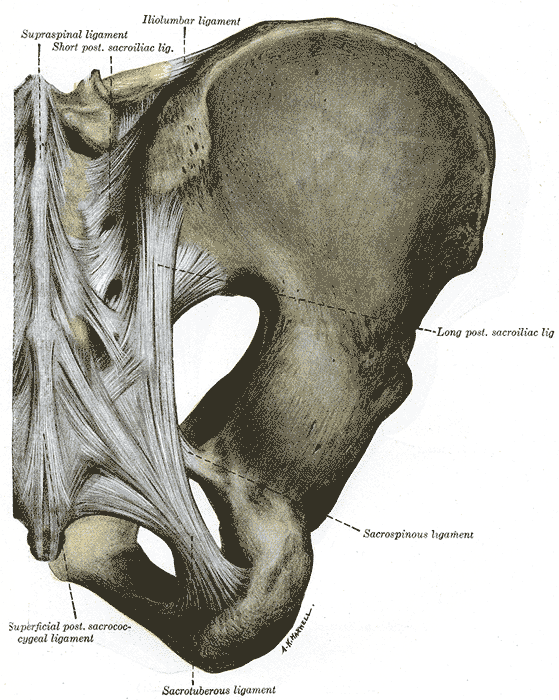 Caption2 = Articulations of . Posterior view.
From =
To =
MeshName =
MeshNumber =
The sacrotuberous ligament (great or posterior sacrosciatic ligament) is situated at the lower and back part of the . It is flat, and triangular in form; narrower in the middle than at the ends.

It runs from the (the , the and the upper [ Marios Loukas,Robert G Louis Jr, Barry Hallner, Ankmalika A Gupta and Dorothy White. (2006) "Anatomical and surgical considerations of the sacrotuberous ligament and its relevance in pudendal nerve entrapment syndrome" Surg Radiol Anat 28(2): 163-169] ) to the .

The membranous falciform process of the sacrotuberous ligament was found to be absent in 13% of . When present it extends towards the travelling along the and fusing with the .

The sacrotuberous ligament contains the coccygeal branch of the .

The lower border of the ligament was found to be directly continuous with the tendon of origin of the long head of the in approximately 50% of subjects [Vleeming, A., R. Stoeckart, et al. (1989). "The sacrotuberous ligament: a conceptual approach to its dynamic role in stabilizing the sacroiliac joint." Clinical Biomechanics 4(4): 200-203.] . could therefore act to stabilise the sacroiliac joint via the sacrotuberous ligament.

* - "Deep muscles of the gluteal region with gluteus medius and maximus muscles removed."
* - "Posterior view of the bones and ligaments of the hip joint."
* - "The Female Perineum"
* - "The Male Perineum and the Penis: Boundaries of the "
*
*