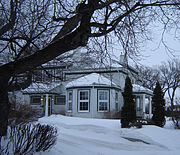 City Park is a community in Saskatoon, Saskatchewan, Canada. It has a mixture of early 1900 character homes, wartime houses circa 1946, and recent developments. This neighbourhood is centrally located in the City of Saskatoon just to the north of the Central Business District. Saskatoon City Hospital, the Mendel Art Gallery, numerous parks, and the Meewasin observation point of the weir are just a few of the many points of interest in this river side neighbourhood.

Within the Core Neighbourhoods Suburban Development Area (West Side), the neighbourhood of City Park is bounded to the south by 25th Street and the Central Business District. Buildings on both sides of First Avenue are included, and everything the east to the South Saskatchewan River. 33rd Street is the northern boundary.

The greenspace named City Park is now named Kinsmen Park. This area was first purchased by the municipality in 1903. This area was first used as a horse racing track. In 1886, residents assembled together at Broadway Area "Louise Grounds" for an agricultural fair. Following this year, this event was held at City Park until 1910 when the agriculture exhibition moved to Prairieland Park. Kinsmen Park now hosts a children's park a play pool adjoins the Kinsmen Park Rides complete with miniature Ferris wheel, carousel, and train rides. [4][5] [6] [7]

A unique new heritage site for Saskatoon is located in City Park subdivision. The Alexander Residence which is located at 1020 Spadina Crescent East, this unique 1912 character house was home to Dr. Harold Alexander, head of the Surgery Department at St. Paul’s Hospital. [8]

The river weir built in the depression years of the dirty thirties. Prairie Farm Rehabilitation Administration (PFRA), completed this cement structure to control South Saskatchewan River water levels on March 15, 1940. [9] The Meewasin Valley Authority completed the Meewasin Riverworks observation area in the year. The sandbar combined with the excellent feeding grounds of the weir makes an excellent undisturbed nesting ground for migrating bird species of which pelicans herald the arrival of spring. City Park is connected to the east side near University of Saskatchewan campus via a walking path on the CPR Bridge.

A unique flavour to the community is Warburton Street. This street has been shown on maps running between 3rd and 10th Avenues since Saskatoon's early years, but until only about two decades ago, it never existed. Although the portion between 7th and 10th Avenues now exists, the remainder -- despite still appearing on maps between 3rd and 7th Avenues is considered a paper street (E.T. Russell, in his Streets and Roads of Saskatoon, described the roadway as "trackage".) [10] An attempt at imaging the section between 3rd and 7th was made by Google Street View, the result being several images that appear to have been taken in the middle of a field.

The first post office of City Park named Saskatoon Sub 3 was located at a store located at the corner of 27th St. and Avenue D. (A later address was given as 402 27th St. West) Joseph I. Mercer was appointed post master July 14, 1915.[11]

City Park, being one of the first areas of the City of Saskatoon to develop is laid out in a grid road fashion. Streets run east and west, Avenues travel north and south. First Avenue through 9th Avenue meet up to King Crescent and Spadina Crescent. Spadina Crescent provides a scenic route along the riverbank of the South Saskatchewan River. Spadina Crescent crosses the Spadina Crescent Bridge. The streets stop being named numerically at 26th Street through the City Park neighbourhood, and introduce Queen, King, Princess, Duke, Duchess, Lauriston and Warburton Streets.

Saskatchewan's Vice-Regal Couple visit the Mendel at a community event for the Monarchist League of Canada, 2006

There is a wonderful gift shop of artist creations at the Mendel Art Gallery as well as art books and posters.

There is a small hospital gift shop at the Saskatoon City Hospital.