Beside extensive training in basic combat engineering, Combat Engineering Corps are specialized and go through advanced training in their profession. The professions are:

Soldiers from Yahalom at the conclusion of a military exercise

Soldiers from the "Yanshuf" (Owl) Battalion, a battalion specializing in ABC warfare, training on the Golan Heights

The Israeli combat engineers and sappers are combat soldiers and therefor have a personal gear and weapons as infantry soldiers. Their issued rifle is the CAR-15 and M4 Carbine. Other weapons include hand grenades, M203 grenade launcher, IMI Negev, FN MAG and M2 Browning machineguns and M24 SWS and Barret M82A1 sniper rifles.

The Combat Engineering Corps has a record of professional achievement and decoration. Its best known operation is the bridging of the Suez Canal during the Yom Kippur War. The coprs was formed from the sabotage unit of the Palmach and the tractors operators units of the Israeli War of Independence. In its ealy years, the Combat Engineering Corps drew its soldiers mainly from Jews who had served in the United Kingdom's Royal Engineers. 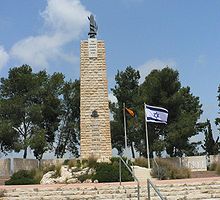 "Road of Heroism" memorial for the fallen soldiers of the Israeli Engineering Corps, near Hulda forest, at the Burma Road, Israel.

In the 1956 Sinai war, the Combat Engineering Corps destroyed Egyptian military infrastructure in the Sinai Peninsula and was awarded with a battalion recommendation of honor.

After the war, the Combat Engineering Corps helped to build a fortification line of defense along the Suez Canal and was awarded the Israel Security Prize in 1969. The Israeli Engineering Corps were the first corps to win the award.

In the 1973 Yom Kippur War the combat engineering battalions attached to Ariel Sharon's armored division bridged the Suez Canal during "Operation Knights of Heart", while carrying tanks and paratroopers across the canal with Gillois amphibious tank-carriers. This effort enabled Sharon and Avraham "Bren" Adan's armored divisions to cross the canal and surround the 3rd Egyptian Army, forcing it to surrender. The bridging of the canal is regarded by many as the turning point of the war on the southern front. On the northern front, a Combat Engineering Corps Caterpillar D9 bulldozer was the first ever motorized vehicle to reach the summit of the Hermon.

In Operation Peace for Galilee the Combat Engineering Corps worked intensively to open routes for Israeli forces. Their duties also included the disarming landmines and IEDs as well as building fortifications and outposts.

In the 1991 Gulf War, the NBC purifiers of the Combat Engineering Corps were on a "code red" alert for disarming Iraqi Scud missiles, armed with non-conventional warheads.

On October 7, 2000 three Israeli combat engineering soldiers were kidnapped by Hezbollah from the Shebaa Farms, in the Golan Heights. The soldiers, Beni Avraham, Adi Avitan and Omar Sawaed, suffered fatal injuries during their abduction. Their bodies were retrieved in 2004 at a prisoner swap deal with Hezbollah.

A series of accusations were made against the United Nations Interim Force in Lebanon (UNIFIL) by press and partisan web sites for having cooperated with the abduction. Those accusations stem from a video, whose existence was originally denied by U.N. officials, recorded by Indian peacekeepers one day after the abduction. The video, which the U.N. agreed to provide to Israeli officials in June 2001 with civilian faces blurred, showed abandoned vehicles with fake U.N. license plates and uniforms, and Hezbollah supporters intercepting U.N. efforts to retrieve the vehicles. A U.N. investigation also found no evidence to support accusations of peacekeepers involvement in the abduction. [1] Although the bereaved families met with Kofi Annan, they refused to accept the UN version. On September 2004, the bereaved families announced their intention to sue the UN, Hezbollah, Iran, Syria and Lebanon for their parts in the abduction. [2] 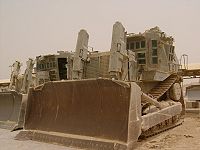 IDF D9L, which won the Battle of Jenin 2002 during Operation Defensive Shield. The armored Caterpillar D9 bulldozers were cited by military experts as a key factor in keeping IDF casualties low.

However, the Combat Engineering Corps were most known for operating the armored IDF Caterpillar D9 bulldozers, which are cited by many Israelis and military experts as a key factor in keeping IDF casualties low and successfully fighting terrorism. On the other side, for Palestinians, the bulldozers became a nightmare, as they bulldozed many Palestinian buildings and shrubbery, and were almost impervious to Palestinian attacks. The Combat Engineering Corps bulldozers' operators unit received an honor of recommendation for its activity in Jenin during Operation Defensive Shield.

Bulldozers were also massively employed in Rafah to counter terrorist smuggling tunnels. Human Rights Watch published a report criticizing the extensive destruction of Palestinian houses in the southern Gaza strip, and said it was unlawful, claiming that Israel uses the Palestinian smuggling tunnels as a pretext to create a "buffer zone" along the Gaza-Egypt border. In Rafah, the Combat Engineering Corps formed a special unit, designated for searching and destroying smuggling tunnels, it is called SAMUR and now belongs to Yaalom. They also received an honor of recommendation, for their conduct. Until the Disengagement plan, the Combat Engineering 603 battalion's Reconnaissance platoon (מחס"ר) held a record of over 70 terrorists killed in 2004-2005 on the border between the Gaza Strip and Israel. They received an honor of recommendation for this achievement.

The Combat Engineering Corps took significant part in the Second Lebanon War that erupted in 2006 after Hizbullah attacked IDF patrol, abducted two soldiers and killed another 8 with anti-tank missiles and IED that hit the rescuers.

On July 16 combat engineering forces from Asaf battalion were the first to enter Lebanon. Their mission was to clear IEDs, open safe routes to ground forces and demolish Hizbullah infrastructures. Yahalom bomb disposal experts and IDF Caterpillar D9 bulldozers cleared most of Hizbullah's IEDs. During the war, a D9 went over a 500 kg belly charge IED but survived without taking significant damage.

During the war, combat engineers used bulldozers and explosives to destroy Hezbollah outposts, bunkers, warehouses and HQs—mainly along the border. The works intensified as the war reached near end, and indeed the borderline was cleared in time.

During the Gaza War (2008–2009) codenamed "Operation Cast Lead" by the IDF, combat engineering forces were the first to enter the Gaza Strip to clear IEDs, booby traps and open safe routes to armor and infantry.

Many booby traps, rigged structures and tunnels were present in the Gaza Strip as part of Hamas efforts to preper to the Gaza war. These were often concealed in civilian structures, and were even found in schools and mosques. However, most of the Palestinian booby traps were successfully countered by the IDF Combat Engineering Corps bomb disposal experts (part of Yahalom Special Engineering Unit) which dismentaled the bombs and armored D9 bulldozers which detonated bombs and booby traps while sustaining no damage from the explosions. IDF Caterpillar D9R and unmanned "Raam HaShachar" D9N armored bulldozers which opened route in dangerous areas have taken a lot of IEDs, landmines, explosive charges and RPG hits, but no crewmen were killed. However, a Yahalom bomb disposal expert was killed after entering a house and encountering a suicide bomber. He was the only fatality of the Combat Engineering Corps during the war.

Beside of neutralizing Hamas IEDs and traps, combat engineering forces demolished Hamas infrastructure and other structures which used as outpost, shooting positions, traps, cover for tunnels, HQs or a warehouses. The head officer of the Combat Engineering Corps (קהנ"ר) estimated that about 600 buildings were bulldozed or exploded by his troops.